There is a small, weathered shack on the side of a path in a valley in Nicaragua. It is part of the Tisey Estanzuela Natural Reserve, which lies just outside of Esteli. Tisey is a 23,000 acre protected area—it starts at the top of a hill and continues down the other side. A rough dirt road winds up to the reserve, providing spectacular views of rolling hills. Roaming cattle and stray horses saunter along the side of the road while children play outside small homes and farms. At the top, there is a small footpath that leads down the hill, past lush greenery and tall trees, to the only house that can be seen for miles. This is the home of Alberto Gutierrez.

Gutierrez is known to most as the hermit of Nicaragua. He’s almost 80 years old and has been living on the same land his whole life. He lives simply, without electricity or running water, subsisting on what the land provides to him. This includes trees that grow bananas, oranges, mangoes and coffee. He also grows pineapples himself. Gutierrez spends his days carving images into a cliff—a hobby he’s been doing for over 30 years now. His unique lifestyle has intrigued many travelling wanderers, and while not all of them have made the trek to find him, the ones who have are inspired.

Gutierrez is known to most as the hermit of Nicaragua. He’s almost 80 years old and has been living on the same land his whole life

According to his blog, Matthew Karsten decided to hitchhike to Tisey to find the hermit of Nicaragua and he was not disappointed. As he walked down the hill, Gutierrez came out of his house to happily greet him. “The proud owner of a magnificent snow-white afro, leathery sun-tanned skin, and weathered lines etched into his face,” writes Karsten. “He looked like Father Time himself.”

Gutierrez loves showing visitors his carvings and artwork. Large boulders surround his home, images of churches and animals etched into their stone. Gutierrez carves using two sharpened pieces of rebar, a metal blade, and a stone hammer. Sometimes he uses colour: traces of red, blue, yellow, and white appear in his images.

Large boulders surround his home, images of churches and animals etched into their stone

A cliff wall that stretches over 300 feet is completely covered with his carvings. Birds, rabbits, deer, snakes, jaguars, and four-foot elephants roam the walls. He’s carved entire maps of Nicaragua, cathedrals, Christopher Columbus’s ships, the Twin Towers of New York City and an entire shrine with visuals of Christ surrounded by flowers and greenery. He’s also built wooden benches along the path so that visitors can sit down, take in the artwork, and enjoy the view of the valley below.

Visitors can sit down, take in the artwork, and enjoy the view of the valley below 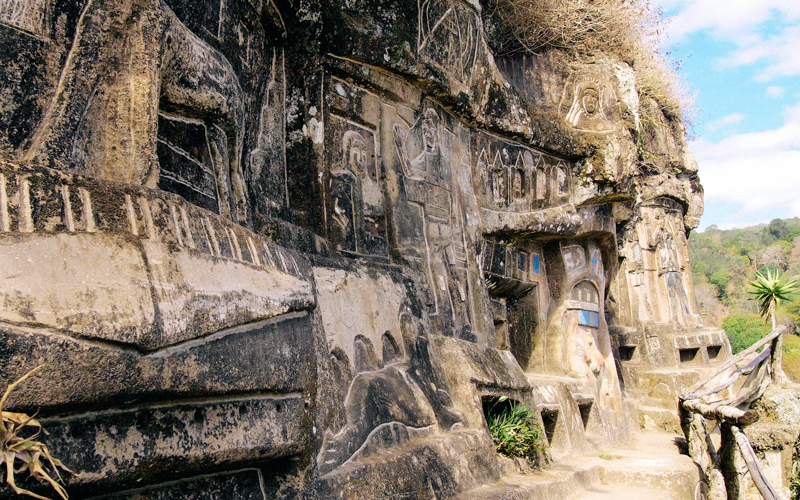 “We stopped to rest frequently, and he offered me a cigarette,” writes Karsten of his time with Gutierrez. “I normally don’t smoke them, but how could I refuse this wildman of the woods? I pulled out my own small bottle of whiskey, and we drank and smoked while he rambled on for an hour. It was great.”

If you’re ever in Nicaragua and are up for the challenge of finding the hermit, it would likely be incredibly rewarding. Aside from the picture-perfect views and the beautiful carvings, Gutierrez is an eccentric character with love for his land, an appreciation for his surroundings, and a colourful story to tell.

Gutierrez is an eccentric character with love for his land, an appreciation for his surroundings, and a colourful story to tell