Isolated as he was, no one knows much about the man known by locals as the Mad Russian. His life both before and after his time in the Cariboo region of British Columbia is a mire of conjecture and speculation. Even the claim that he was Russian is up for debate; as the Williams Lake Tribune points out, some locals suggest that he was actually Swiss. His isolationist lifestyle was so successful that no one ever learned his story.

Despite his enigmatic nature, he is a local legend in Williams Lake and the surrounding area. Though he spent most of his time in the Cariboo away from other people, the impressive feats of construction, engineering, and mining that he managed to undertake with no help from anyone beyond the occasional borrowed tool are common knowledge in the area. The fact that many of his structures and projects still exist today only helps to keep his story alive.

The Mad Russian built this small cabin near Soda Creek in the mid-1950s.

According to the locals, the man—who was called Joe by those who dealt with him—arrived in the Cariboo sometime in the mid-1950s. He started out near Soda Creek, where he spent a couple years living an isolated life in a cabin he built, panning for the gold that he used to pay for any necessities. Then, in 1958, he loaded his cabin onto a raft and floated it down the Fraser River until he came to the island that would be his home for the next 15 years. The island was unnamed and unclaimed at the time, and though it is still a public area, it is now called either the Mad Russian’s Island or simply Russian Island, depending on who you ask.

It is on this island that most of Joe’s hard work can be admired. Two different YouTube adventurers have been to the island and posted their findings online. The first is Dustin Porter, under the YouTube handle Destination Adventure. Although his video shows a few of the aspects of Russian Island, he focuses more on explaining how other explorers can get to the island and see it for themselves. The second, who goes by Frasercanyonballer, gives a more thorough tour of the island and its hidden gems. He also shares all the information he could collect from locals about the man.

Joe used the A-frame hoist to lift heavy items, including his small cabin, onto the upper level of the island.

The first thing Joe built on the island was the A-frame with which he lifted the small cabin onto the rocky landmass. After the cabin was set up, he logged the island. Using a saw that was powered “with a Volkswagen engine,” he cut the logs into planks that he used to make the larger house that can be found on Russian Island, the most iconic structure on the island, visible from the mainland. One of the most impressive constructions on the island is the chimney on the large house, which consists of a couple hundred river rocks that are mortared together. The rocks range from a few centimetres across to a couple metres. It is assumed that the larger rocks were hoisted onto the island with the A-frame, as was anything too heavy for him to carry.

One of the most impressive things Joe made is the chimney of his larger house, which extends a few feet past the back of the house. 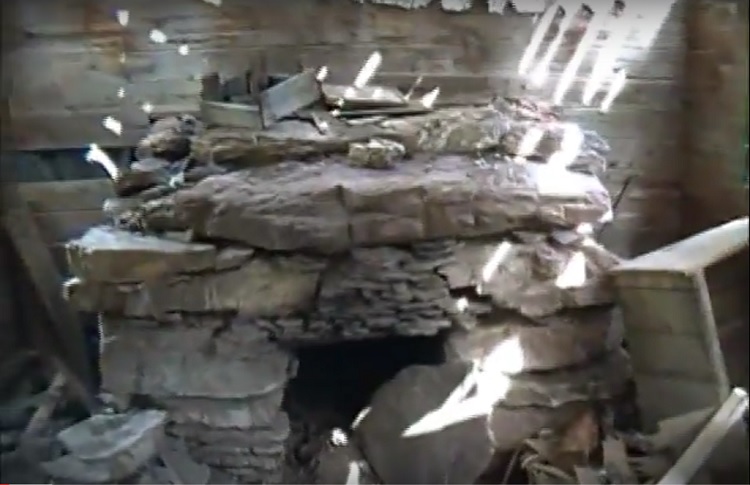 He also built a rowboat and a series of root cellars, further evidence of his engineering skill. As the Tribune reports, “He was certainly good with his hands, and seemed to be able to build or fix anything.” Even now, preserved food can be found in jars in the root cellars, protected from the elements.

Joe’s departure from the Cariboo is just as mysterious and full of speculation as his arrival. As far as anyone can tell, he just up and left one day with no visible reason sometime in 1972 or ’73. When someone finally noticed he was missing, the police and coroner went to the island to look for him. They found dishes on his table, and it looked like he had only stepped out for a moment. According to Frasercanyonballer, Joe’s “boat was [later] found overturned down the river at San Jose Creek.” Locals thought at the time that he had drowned, though his body was never recovered. Another theory is that he took a stockpile of gold and left the Cariboo for another home. Someone claimed to have seen him at his sister’s peat farm on the Lower Mainland of British Columbia, though others question whether the man they saw was Joe.

Jars of preserved food can still be found in and around the root cellars that Joe built into the island.

Whatever happened to him, Joe never returned to the island or the area. Russian Island has been abandoned ever since, and the amount of effort it takes to reach the island prevents all but the most determined adventurers from visiting it. This difficulty is part of the appeal of the place; not only do some explorers like a challenge, but the hardship deters petty vandals from destroying Joe’s home. Porter says, “It’s one of my favourite places because it’s so hard to get there, it hasn’t really been vandalized, and it’s still, today, 60 years later, still pretty much the same as he left it.” Some of the floorboards of the large house have been pulled up by people looking for Joe’s gold stash, but everything is still largely intact.

The Mad Russian lived an impressively self-sufficient life. Despite his isolation, he managed to build everything he needed except for a very few things that he bought in Williams Lake, which he visited only two or three times a year. The enormity of his accomplishments is best encapsulated by the awe in Frasercanyonballer’s voice when he says, “One man, no help, fifteen years.” Alone for fifteen years, Joe somehow managed to harvest the trees and rocks he needed, and made planks or mortar as required to build his structures. He also mined deep into the island in many places for his root cellars (and supposedly for gold) through layers of rock, despite the fact that he was apparently into his seventies before he went missing. The buildings and materials that remain are a tribute to his tenacity and his inspiring fortitude.