We had lost or broken, months ago, almost every electronic device we had brought with us. The only thing we had left that kept time was our point-and-shoot digital camera. It didn’t have an alarm so to be sure we woke up by five to catch our bus I had to wake myself up and turn the camera on to check the time. Between 10.00pm and 5.00am I probably woke up half a dozen times, but the last one was right on the mark. We made it to our bus stop with minutes to spare.

I paced up and down the gravel road running through town, trying to stay warm while my wife, Shawna, sat on the sidewalk with our daughter, Bell, sleeping in her arms. Six o’clock in the morning, our bus’ scheduled arrival time, had come and gone, which wasn’t too unusual in our experience. When the sun came up we became discouraged and gave up on the bus. As we gathered our bags to walk back to our hostel a small truck pulled up and two guys jumped out. They explained with a definite sense of urgency that the bus wouldn’t be running that day. There was road construction, but they could take us to the next village to meet another truck that was going to Quilatoa, the town we were trying to reach.

I was already confused and irritated because we were assured the night before that the bus would be running. I was also concerned about the frustration of the guys in the truck when we hesitated. Shawna looked at me with a frown, putting her fingernails on her bottom lip as she did when she was nervous. “Is this okay?” she asked. She understood less of the language than I did, so she was even more bewildered.

I didn’t answer because I didn’t know. I was too tired and cold to think clearly so we climbed into the back of the truck. Just at the edge of town the truck turned abruptly off the main road down a dirt path into the canyon. I panicked. I banged on the roof and yelled for them to stop. They didn’t stop immediately. I kept banging and yelling and finally they let us out. The guys were dismayed as we ran away from them and back to town. Even if they weren’t taking us somewhere we didn’t want to go I didn’t think it was safe to have my year-and-a-half-old child in the back of a truck bouncing through a canyon in the middle of Ecuador.

An hour later we connected with a group of students headed to Quilatoa and shared a truck. It turned down the same dirt path as the first one. I looked at one of the students. “There’s road construction on the highway,” she said. At least my daughter was safer in the cab this time, I thought. 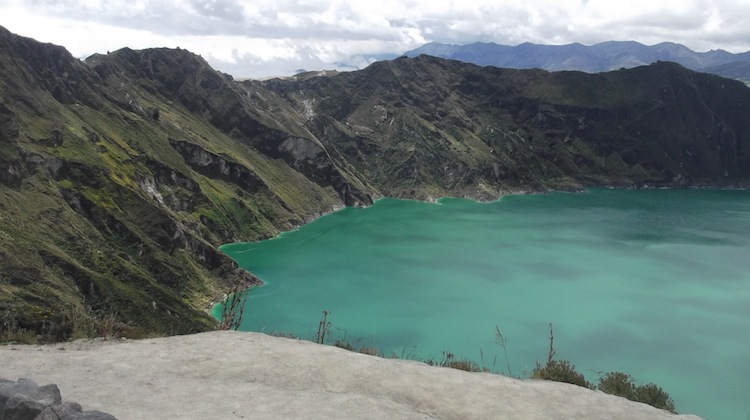 Lago Quilatoa is a volcanic crater lake in central Ecuador. The people indigenous to the area believe it has no bottom. Looking at its deep-turquoise water it’s easy to understand why. The plan was to hike the eight miles from the rim of the crater, down into the canyon off the side, and back up the other side of the canyon into the town of Chugchilan, where we had gotten the truck the morning before. It was a strenuous hike, especially while carrying a twenty pound kid.

After hours of walking through meadows a splendor with wild flowers, small farm plots grasping onto steep cliffs, and a tiny village deep in the canyon, we came to a river crossing. My heart sank at the sight. The river seemed fairly shallow but was moving very swiftly. It was fifteen feet across, spanned by three logs the diameter of my thigh. The logs were tied together with twine and were about five feet above the rushing, muddy water. There were no handrails.

I stared for a minute in disbelief. Neither of us said anything, but Bell started whining as if to say, “You’re not actually thinking about taking me across that bridge, are you? Are you crazy?”

Even more terrifying was the six-inch crack in the steep bank on the other side. The whole section of earth appeared ready to slide off into the river at the slightest disturbance.

I handed Bell to Shawna and hurried up and down the bank, looking for a better crossing. I made my way down to the edge of the river to get a sense of the depth, hoping maybe we could wade across. No way.

What the fuck am I doing here? I thought. The accumulation of months’ worth of feelings of irresponsibility for leaving a good job to bring an infant to this place suddenly landed on top of me. This was the moment that our parents would be able to say “I told you so,” as their precious grandchild ended up in the rapids.

It was too far to backtrack six miles up out of the canyon to Quilatoa. We wouldn’t have made it before dark.

I hugged the girls and tried to reassure myself that this wasn’t as bad as it seemed. I crossed first, shuffling my feet across the logs. This isn’t too bad, I thought, but I wasn’t the one who had to get Bell safely across.

I got to the other side and scrambled up the precarious bank on my hands and feet. As soon as Shawna put her foot on the log, Bell in the child-carrier on her back, I was totally relieved of fear. She was as sure-footed as an animal. There was no indication that she was scared. She was where I always found the confidence to do this sort of thing. When she made it across we laughed and hugged.

We entered town up the same dirt path the two guys tried to take us down the morning before, and I was embarrassed for not trusting them. Along with everyone else we had encountered along the journey, they were trying to help the clueless foreigners with the helpless child. 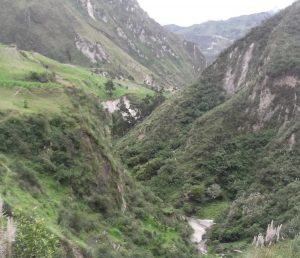 The day after completing our hike from Quilatoa, while taking my daughter on a walk up the steep road above town, I passed a boy resting at the side of the road. I was too out of breath to speak more than a few words. I had no idea what he was thinking but his expression said, “What in the world are you doing here?” It was the same question I had asked myself at the river crossing.

This time I had the answer in mind. “I’ve traveled for six months through this continent, this country, this town to walk up this steep hill at 10,000 ft of elevation in the Andes with no particular destination in mind because my life is too easy. I was born with every possible privilege so I have to create artificial adversity to be fulfilled.”

We continued on a little farther until an older couple pulled up in a car and stopped. “Where are you going?” the woman asked.

She looked ahead and said, “There is a pack of stray dogs up around there. You shouldn’t walk there with the baby.” Gesturing towards the back seat, “If you want a ride, we’re going up to our farm. You can come walk around there until we go back to town if you’re looking for somewhere safe to walk.”

We got in and rode another mile or so and pulled into a lane. The man walked to check on their sheep and the woman showed me a small waterfall with a pool below she said the Inca used to use as a bath. On the hill she pointed to the west and said that on clear days you could see all the way to the coast, almost two hundred miles away.

An hour later they drove us back to town and stopped out front of the apartment where they lived in the winter when it was too difficult for them to stay at the farm. We said goodbye and I walked away feeling grateful for their kindness. They had made our walk much more interesting, and had looked out for our well-being.

Traveling like this can be risky, but nearly every day of our trip there were instances of total strangers going out of their way to show us generosity and friendliness. Instead of being afraid of taking a small child to unknown places, most of the time I felt like she gave us some kind of protective bubble. People seemed so interested in making sure we were okay and enjoying our experience.

We knew Bell wouldn’t have conscious memories of this trip, but we were sure that the journey would stay with her somewhere deep. We wanted her to know that people are good if you allow them to be, and that that’s more meaningful than making money, personal comfort and convenience, and ease of existence.

Even if she’s too young to accept that lesson, at least for now, she goes where we go.