Since about the time it came out, I have remained heavily anti-Tinder. Of course I would never pass judgment on those who actually use it, I just personally have zero interest in receiving dick pics from self-righteous frat guys at any hour of the day. “Not everybody’s looking for sex, and some of the guys seem really great,” so I’ve been told. But the ‘great’ guy to ‘dick pic’ guy ratio is similar to the winning percentage in a Vegas casino slot machine . Call me “old fashioned” but I prefer some of that good ol’ face-to-face flirting. So I decided to try stone-age Tinder— also known as speed dating. 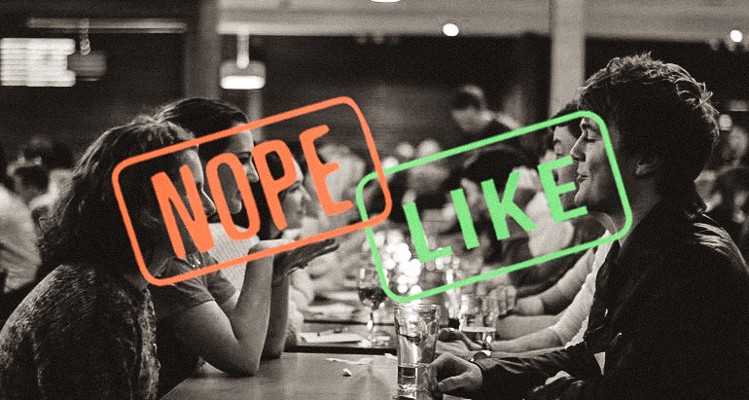 The event took place in a sketchy little jazz bar, located behind another bar. I was more than a little skeptical since the name of the bar used the letter ‘Z’ in place of the letter ‘S’ and the door was a literal curtain. A table sat in the middle of what I imagine was a dance floor, with two “official” type people sitting at it. I signed in and got a stupid little name-tag. They weren’t quite ready to start yet, so I b-lined to the bar. Never have I ever before questioned how much my drink choice reflects me as a person. Suddenly I felt self-conscious about ordering my usual double vodka cran – as if it somehow signified that I was a trashy boozehound. Most of the women were drinking wine. I opted for a beer. I was certain that with a pint in my hand I would look just like that “super chill girl that likes to watch the game and stuff.”

For a person who barely likes beer, I gulped that thing down like it was water. Tables lined three sides of the room and a lot of people were mingling already. I sat in the very corner of the room and surveyed my “dates.” Or if I’m being honest, I tried to scope out the hottest guy there. No, no, no, no, JACKPOT. The apple of my lustful eye was leaning by the bar in a crisp and tailored grey suit. The guy looked like frigging James Bond, with his perfectly placed dirty blonde hair, sipping what could only be a dry martini – shaken, not stirred. Before I had the time to imagine what our kids would look like, the announcement was made. “Alright everybody, we’re ready to begin.” And like a herd of horny, love drunk cattle, we were shuffled to our assigned sections.

Throughout the evening I would be meeting and talking to 16 men. Since I am a dating pessimist, I imagined that everybody would be awful and I would leave having checked off no one. But since I also grew up on a solid diet of Disney movies and Audrey Hepburn, I imagined that if I did check yes to anyone, it would surely be James Bond, and I would be so charming and delightful that I would make Audrey Hepburn seem like a piece of human garbage.

The first guy, along with guys two, three and four were pretty boring, basically sticking to questions like “what do you do for a living,” and “where are you from.” When I would try and spice things up, the conversation would still fall flat. “If you could change into any animal in the world whenever you wanted, what would you be?” “Uhhh, that’s kind of a weird question. A dog, I guess.” Seriously?! Any animal in the world and this guy wants to be a dog. DING DING DING! The five minute bell went off.

“Hey, do you like games?” Now here’s an interesting person. “I do actually,” I replied. “I’ve always loved board games.” “Do you like video games or card games?” Guy five was full of energy. “Well I don’t want to brag but I’m kind of a champion at Mario Kart N64.” “Have you ever played Dungeons and Dragons?” Oh no. He spent the next four minutes explaining to me the rules of Dungeons and Dragons. After what seemed like half an hour, DING DING DING!

I ended up having decent conversations with the next few guys. The time was passing quickly and before I knew it, an arm in a crisp, grey suit extended before me. James Bond. “Hi, nice to meet you. My name is James.” His name is James! This is fate. James was so ridiculously charming and smooth that most of it had to be completely bullshit. But I didn’t care; I flirted harder than I ever have before in my life. “Alright James, time for a super serious question…What’s your favourite movie?” If there was ever a way to ask that question seductively, I found it in that moment. He responded without hesitation. “Spinal Tap.” “Wow, I don’t think I’ve ever known Spinal Tap to be anyones actual favourite movie.” He laughed, “Well I’m a musician, so I appreciate all of the jokes.” Musicians are my dating drug, so this was the second jackpot of the night.

In less than two hours, I went on 16 “dates.” And during the course of those 16 dates, here is what I learned about speed dating.

Eighty per cent of the men you meet will be engineers. So if you’re a gold digger, then this place is your ideal mine. But if you don’t care about money and just want to have an interesting conversation – then you should be aware that 80 per cent of the men you talk to will bore your ears off by over sharing about their boring jobs.

Ninety per cent of the time, you will have the same conversation over and over again. The three questions that you will almost always get asked are “Is this your first time here,” Where are you from,” and “What do you do.” And almost always in that order. If you’re reading this and you’re thinking about going speed dating, my biggest piece of advice is to ask interesting and offbeat questions. I asked a guy what limb he wouldn’t mind cutting off if he were ever in a Saw type situation. While some people would run away frightened, he actually answered and we ended up laughing and having an entire conversation made up of ridiculous would-you-rathers. It was fun, and dating should be fun.

Out of 16 dates, you will probably check off two or three. And in order to match, they also have to check off you, which makes actually matching with someone incredibly difficult. The people you do match with however, you will hopefully have something in common with, or at least be able to hold a conversation. Unlike Tinder, speed dating allows you to test out your chemistry with someone in person, which says a lot considering that anyone can be charming in a profile bio that they spent 10 hours conjuring up. With speed dating, it’s much harder to fake interesting on the spot.

However, exactly like Tinder you will most likely end up judging your dates based on appearances. I like to pretend that I had this inspirational dating experience, chock full of intimate connections and stimulating conversations where ultimately I would choose someone, who on paper I would normally turn away from. Maybe I checked off the Dungeons and Dragons guy or the guy with the patchy beard and glasses, which he surely stole from Bubbles on Trailer Park Boys. But I didn’t. Instead I checked off James Bond and the guy who I had the funny conversation with – who coincidentally looked like a gruffer version of Jared Leto.

I like to believe that people are generally not superficial. I like to think that the only reason we write people off is because we’ve spent time with them and genuinely don’t feel any connection. But that’s bullshit. Because the biggest thing I learnt from speed dating is that it’s exactly like Tinder, just in person.