It was my TV guilty pleasure, and my first television gig. Just in case you’re not acquainted, Keys to the VIP was a sleazy reality TV show on the Comedy Network where two contestants competed against each other in a club trying to pick up women. Yes it was as painful as it sounds. I was hired as a production assistant, which might sound fancy to someone like my mom, but ultimately it just involves hanging out and doing shitty things; like helping a jaded middle-age dude set up lights, or bringing a D-list Canadian actor a diet Dr Pepper when they’re “famished.”

It was simultaneously the best and worst job I’ve ever had.

As a youngster, I was never a fan of nightclubs. If you’ve ever been to the entertainment district in Toronto, you already know what I’m talking about. It’s basically like the post-apocalyptic world of Mad Max with way more Patron, and an abnormal amount of dudes with Napoleon complexes chasing after women in cocktail dresses, who stumble around with their shoes in their hands, on a desperate search for poutine.

My first night out filming was a grand ol’ time. As I walked to where our film equipment was, stashed in the back of the club, I found a lonely and intoxicated bro who was about to piss on a bunch of live wires. Even though he was a smaller gentleman, his head was oddly small for his slight frame. I stopped him as he was about to shoot some volts up his dick, to which he angrily replied that he could do anything he wanted. I know some of you reading this are thinking that I probably should’ve just let him get electrocuted, but an exploding dick is still an exploding dick, and I was right in the splash zone for the remnants of said exploding dick.

As his loud whining persisted, he caught the attention of a bouncer nearby who then threw him, literally, out the back door as he kept yelling that he was going to kill me. I shrugged off Pea-Head the Dick-Exploder and got back to work.

As we were outside wrapping up cables, a car tried to side swipe me at full speed, narrowly missing me. It was Pea-Head. Another P.A who was next to me calmly grabbed the arm off a grip stand to use as a club if he tried it again—as if this was a normal situation that’s happened before. Unfortunately for our pal Pea-Head, cops were across the street and promptly arrested him with a handful of charges, such as careless driving and driving under the influence.

This was an accurate foreshadowing of things that were to come.

Watch Out for Stacey

While shooting a different episode, I was doing camera assistant duty in a Toronto club that was probably named after a type of rug with their logo in cursive. The club was set up in such a way that their outdoor patio on the ground floor was general admission, the second story patio that overlooked it was VIP, and the 3rd story patio was for “bro, I know the owners” super VIP.

I arrived at the door of the club where the bouncers strictly informed me my Vans slip-ons were against dress code. I informed them I would never come here on my own free will and that I was supposed to be on the 3rd story to help them film. I followed them through the club as they pushed patrons to the side, parting a room full of guidos like a modern day Moses. I looked around to blank stares of confusion from the entire room as I went through VIP and then to the super-douche VIP on the top floor; and I have to admit, I could get used to the special treatment.

We set up the camera to overlook the club, and everything was going smoothly until a group of women dressed in schoolgirl outfits showed up in the room next to ours and began partying heavily. Watching them stumble up the stairs and knocking into everything in sight made it very clear this wasn’t their first stop of the night. One woman, we’ll call her Stacey from now on, stumbled into our room in a drunken daze and asked me if I would like to dance. I let her know that I appreciated the offer, but was on the job, and not the type of fellow to just go to a club and film for my own personal enjoyment. Not taking no for an answer, Stacey began grinding my leg. Not having a spray bottle full of water on me to defuse the situation, I stood there awkwardly until she told me I was no fun and left the room.

We watched on from above as Stacey terrorized the ground floor. From stealing drinks out of people’s hands to face palming any face that was in the general vicinity, Stacey had it going on. She was a huge liability, and it confused me why security wasn’t doing anything before something terrible happened. Stacey was on her way back up with her eyes locked right on to mine. I remember telling the cameraman to prepare for the worst.

Stacey barged in and collapsed. Legs up. No underwear. Panicking, I ran into the next room to find a bottle of water to splash her face with to revive her, and with much success got her to her feet where we re-enacted the cover of The Bodyguard, as we pushed again through the guido sea. Given that her friends had stranded her, I got her to a cab outside, made sure the cab was paid for, and that he knew where to take her. As I was about to close the door, the ever so annoying fucking guy with roses soliciting money shows up and asked if I want to buy her a rose. Really, annoying fucking guy with roses?

Stacey told me she wanted to buy me a flower, but after somehow managing to complete the transaction, just held on to it the entire time and never actually gave it to me. She slurred out a “thank you” for everything I did— and for the rose, which I didn’t actually buy. The cab disappeared into an abyss of honking horns and hot dog vendors. One of the producers rushed over once he heard what had happened and whilst explaining to him the story, a cop tackled a man next to me and beat him up for stealing a burrito. I would like to think The Four Seasons wrote the song “Oh, What a Night” about a similar one to mine that evening. 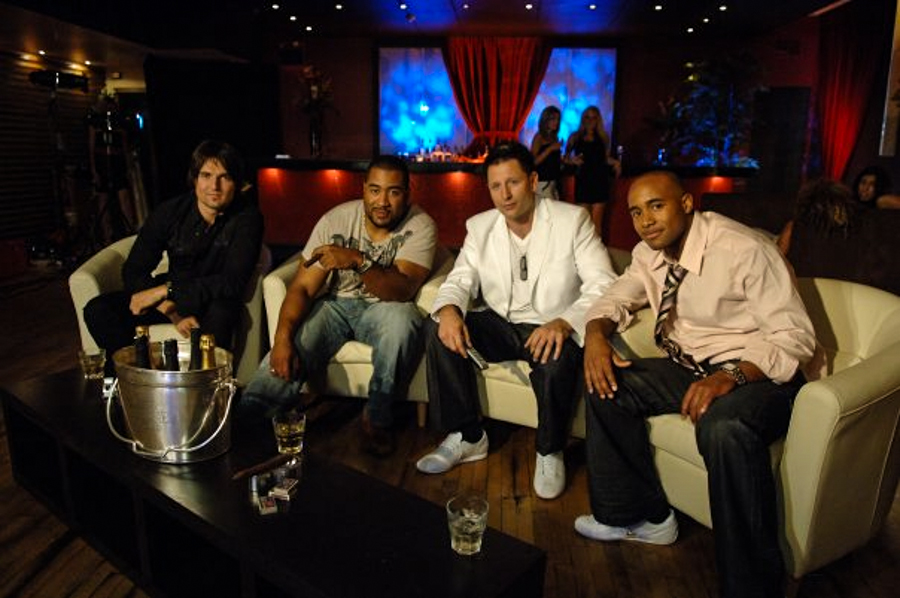 The judges weren’t bad guys at all. I thought they would be misogynistic, pseudo-macho types, but most of them were average dudes with full time jobs. I remember one guy was a parole officer or a court usher… something like that. I always wanted to know how many times criminals he would deal with would recognize him and be like: “Aren’t you the guy who gives tips to men on how to bring women home?”

One judge seemed that he was just happy to be there and didn’t give a shit about what was happening at all. I remember more often than not, the director of the show was giving him lines to say because he wasn’t sure what to think of watching two dudes trying to get laid in a bar. I mostly kept quiet on set and never talked to them because to be honest, I never had anything to talk to them about. Asking them if they like chicks probably wasn’t going to be the most effective icebreaker. I felt like no one really knew who I was on set, and at the time I preferred it that way… This was until Alen had a mini meltdown.

It was the end of a long day and the show’s co-creator Alen, who is seen as the alpha male of the group, had to read his final lines. I’m almost positive it was for his solo segment where he shows the viewer some tips on how to pick up women–i.e., “buy her stuff” or “tell her you have coke back home” (okay he didn’t say that but it’s not a bad tip).

The director asked me if I could work the clapperboard for this segment, but I don’t know if I even had a choice. With the cast and crew exhausted and wanting to go home, it was only a matter of a few line fuckups that caused Alen to feel some type of way.

For the next 20 or so takes, he would yell at me about nothing really. I was more confused than offended, and looking back at it now, it’s actually pretty hilarious. About a week later I was told by some co-workers that the highlight of Alen’s birthday was a reel that they cut together of him yelling at me that they premiered that night—probably at some terrible chain restaurant.

From then on, for better or worse, everyone on set knew my name. I like Alen, because he used his anger to put me into a place of notoriety.

So, for any film student reading this: go volunteer or get a job working on a reality show. It will give you some of the best experiences you can ever have, because nothing in your career will probably be as bizarre as what you will encounter there.

Enjoy it while you can. I’ll never do that shit again, that’s for sure.