The late-evening sunset afterglow covers Toronto’s cityscape which in light of where I’m headed seems a lot more daunting than peaceful. My stomach drops as I look out the window as my train pulls into the station. The varying heights of skyscrapers look like uneven teeth. I know I’ll be climbing one of them tonight.

Urban exploring is a subculture rich with adventurers with a conscious death wish. Explorers dangling at the edge of buildings for the perfect photo has undoubtedly caused controversy for its illegality—with hefty fines sometimes upwards of $1,000 for trespassing— and in some cases that death wish has come true. Yet the allure of urban exploration hasn’t stopped those who look at the city skyline and see opportunity knocking.

Giulio Calisse, an urban explorer in Toronto, specializes in imaging from short films to photography. At 16 he was interested in parkour, and by capturing the fluid movements of these athletes on film, he landed a job in video editing. Now at 29, he has been scaling the tallest buildings in downtown Toronto for two years and counting. 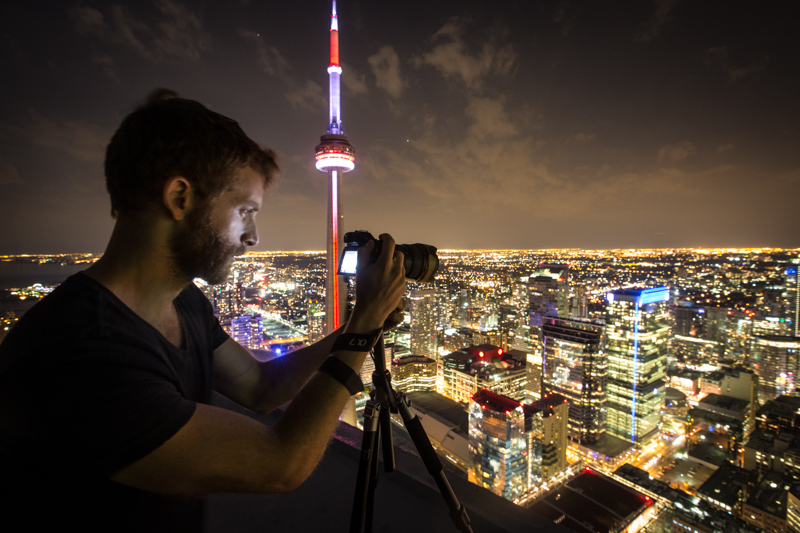 Calisse, like many other urban photographers uses Instagram to showcase his photos and connect with others. It’s social media that has allowed the community of urban explorers to thrive.

“There’s been a lockdown because people keep getting caught because [urban exploration is] getting bigger. It keeps getting trickier and trickier. Construction buildings are usually the easiest,” Calisse says, adding to my fear of getting caught. “If anything, the worst thing that can happen is you can get a ticket.”

Calisse and I walk to an apartment building under construction and scan the area for cameras and security. After about an hour we find one that’s safe enough to climb, sliding through a gap between the fence and the wall of the adjacent building. Each sound my feet make is like a gunshot in my mind— the sound of shoes on bits of broken glass, loose creaking floorboards—every sound adds to the crescendo building in my throat. Please, don’t let us get caught. The hairs on the back of my neck stand straight as we make our way up the seemingly infinite stairwell. Thirty floors later, a rooftop ladder appears.

This high up, there is an unexpected silence above being the beating heart of downtown. The distant cars rush past, but they are not much louder than the breeze that brushes against my face. I look down. Vertigo. I’d definitely die if I slipped. 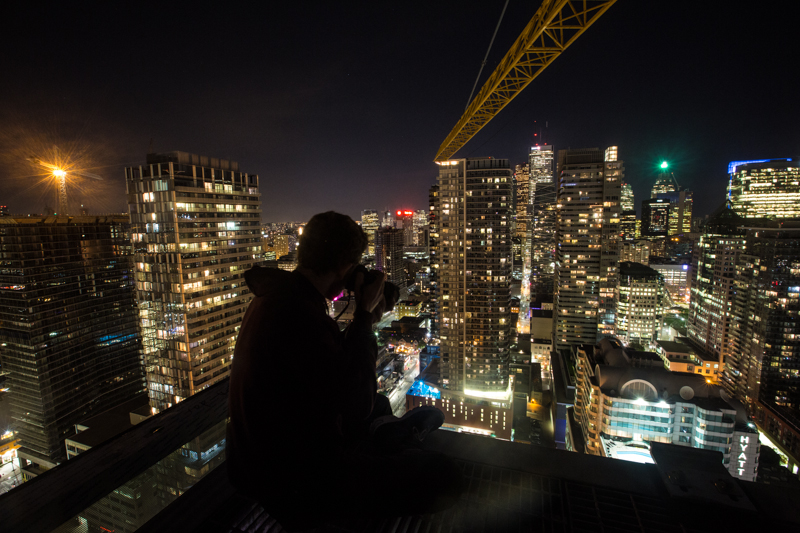 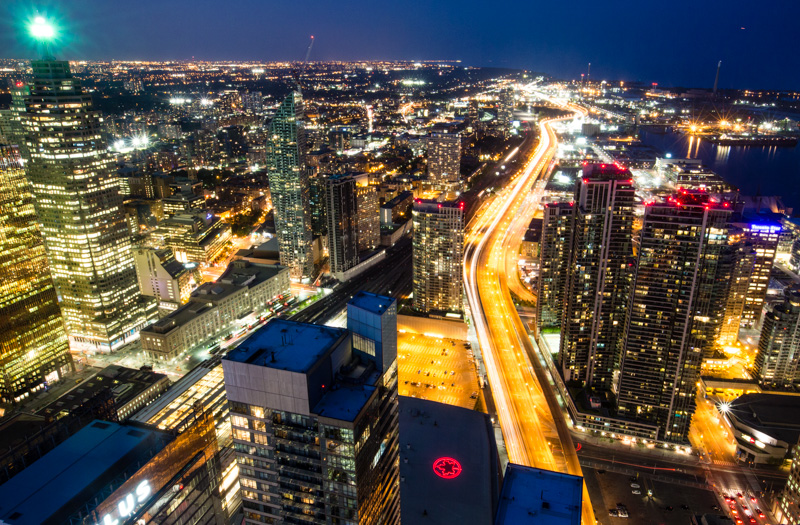 “It’s very chill, it’s not as extreme as you’d expect. It’s what you want to make of it because you are in control,” says Calisse.

Sitting on the ledge, I begin to think that I’ve lived in Toronto my entire life. I’ve walked these streets thousands of times with the tunnel vision that city-life often calls for, but up here perspective is liberated. Calisse takes a few photos from different angles of the roof. The night ends without persecution.

Sitting on the ledge, I begin to think that I’ve lived in Toronto my entire life. I’ve walked these streets thousands of times with the tunnel vision that city-life often calls for, but up here perspective is liberated. 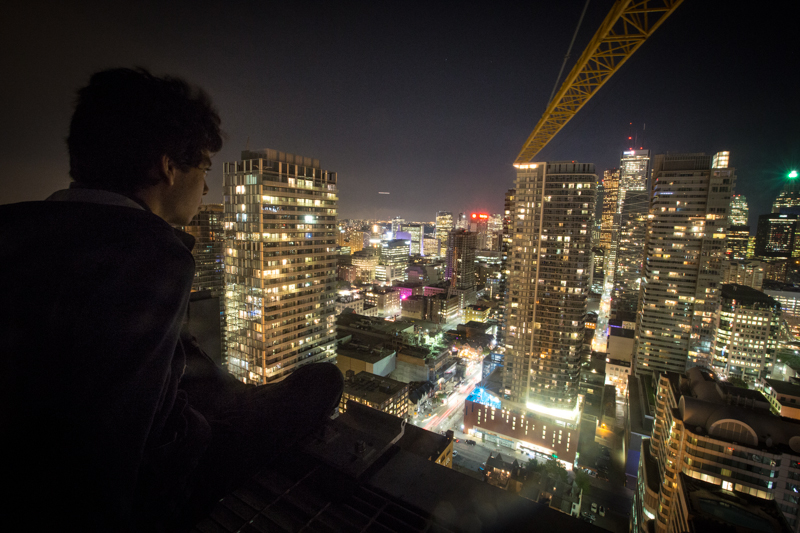 The following day as nightfall approaches, Calisse outlines the route we’ll take to scale another building almost twice the height of last night’s. Climb the gate, sprint through a corridor, hop over the fence, skulk around the side of building, and creep open the glass panel door and the stairwell will be on the right. Sounds easy, right?

Understandably I follow his lead with significantly less agility. When we get to the part where I’m supposed to vault the fence, my grace is questionable. The steel fence shakes so violently beneath my equally shaking body that it echoes throughout the entire building. We are completely caught now. I just know it.

Somehow, we manage to get to the stairwell without raising any alarm.

As we climb the stairs, the inside of my mouth is coated with a thick layer of dust. With each step—and each gasp for breath (note to self: work on cardio)— more dust kicked up from the cement floor settles at the back of my throat.   At the 40th floor  I stop to lean on some construction debris. My legs feel like cheese strings.

Finally we reach the top of the 60-storey-building. Next to the CN Tower—the tallest freestanding structure in North America—we are the second highest rooftop in the city skyline. I can see everything. 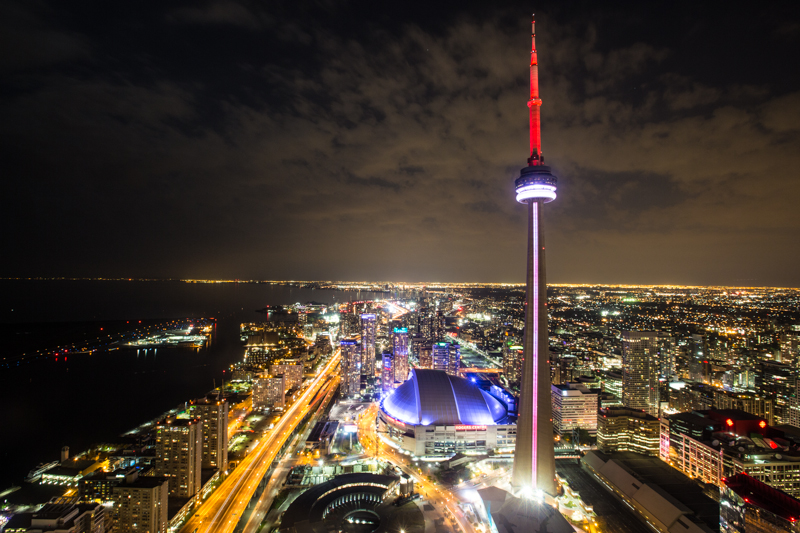 Over 200 metres above the ground,. I decide to crawl to the edge, and peek out at the road below. Vertigo. Okay bad idea.

“There’s a lot of people who freak out about people falling, but I find it pretty silly. There are thousands of balconies. Anyone can fall off them, but you’re worried about three guys on a roof? The kind of people that climb these buildings really have done nothing wrong but take pictures.”

The moon looks like a lantern in the practically cloudless night. Headlights move across highways, the elevators of the CN Tower slide up and down, the perpetual movement of city life moves on unhindered. But up here it’s silent.

“I find that cities are fascinating, and I try to find the spots where you can see the cities in different ways.”

Calisse takes his time to capture the city in front of him. Like stars made of man-made light, the hundreds of windows flicker. Calisse enjoys capturing both the city and the people he brings on his adventures.

“I’m trying to capture big city shots of the entire area. The busier, the crazier, the more lights there are to capture. I like to get shots that give you that vertigo affect. It’s also cool to have a subject in the picture.”

Some days just seem destined for success. Great time shooting with @snappedbycam @zachbirdd and @danyamaclean A photo posted by Giulio Calisse (@giuliocalisse) on Jun 26, 2015 at 5:30am PDT

It’s about then I realize that urban exploring isn’t about an early exit. It’s about finding new perspective. It’s this feeling that continues to draw those to abandoned buildings, and the underbelly of the city’s sewers and tunnels.

“I’ve known people who come up here that aren’t photographers. They just come up here to see the view, and have some drinks. It’s like going to the CN Tower. How else do you get views like this?”

Sitting high above the city, I almost feel like a ghost. Like an observer estranged from the city I call home. I take nothing but notes, and leave nothing but footprints. Photos are the only proof we were even there. 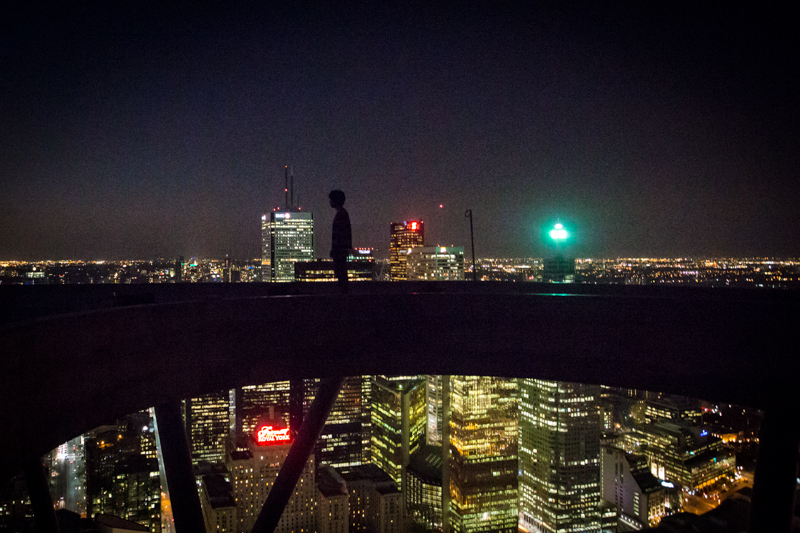