The decade between someone’s late teens and their late twenties is one that is often looked back on nostalgically as a period of great sex and even greater parties.

Anything and everything to do with drinking is appealing. Alcohol becomes a staple in our diets and a fixture on our shelves.

When you’re inebriated, you think that A. you’re the absolute best at everything, and B. that you can rule the world.

It was exactly this way of thinking that brought on this story. I wanted to know if being drunk would actually improve your writing. In the abstract, this idea makes some sense. Being drunk can increase your confidence and the “key to success” is, well, confidence. So why not give it a shot?

About a week ago I hosted a party of writers at a third floor walk-up apartment that I share with three other lovely women. Upon arrival, each guest was given a sheet of blank paper and told to select a pen or marker from the pile in the middle of the kitchen island.

Because we are young, the arrival time was mostly open to interpretation.

After the group had assembled, each guest was told to write something about an apple. Something could have been anything: a poem, a short story, a love letter.

After much consideration, I’d chosen to have the writers use an apple as their muse because it’s a very simple object. I wanted the pieces to reflect the authors through their individual interpretations of a simple object.

Fifteen minutes was given to write these pieces. Time, in this case, was very important. This time constraint allowed for a rapid outpour of word vomit to hit the pages. There was no room to fix grammar or to come up with the perfectly crafted synonym. There was just writing in its purest form.

The sound of pens furiously scratching on paper and the nervous tapping of nimble fingers created the scene.

The jarring sound of an impatient alarm notified the writers that the allotted 15 minutes was up; all the guests had to pass in their papers. There would be no finishing of sentences or reviewing for errors.

As Ernest Hemingway notably wrote to F. Scott Fitzgerald, “Of course you’re a rummy. But you’re no more of a rummy than Joyce is and most good writers are.”

This notion that drinking boosts creativity has been reinforced decade after decade amongst writers.

In a 2010 television interview with Charlie Rose, the late Christopher Hitchens showed no remorse about a lifetime of heavy drinking and smoking. “Writing is what’s important to me, and anything that helps me do that — or enhances and prolongs and deepens and sometimes intensifies argument and conversation — is worth it to me,” he explained, also being sure to add that it was “impossible for [him] to imagine having [his] life without going to those parties, without having those late nights, without that second bottle.”

This is not to say that consuming alcohol for the sake of being creative is a good idea. When you consume alcohol, you’re poisoning yourself. The effects you feel are only temporary, and alcohol poisoning is (and should be treated as) a very serious matter.

A study that came out of Florida State University that used 40 male undergraduate students to assess the effects of alcohol on creativity suggested the belief that writers like Hitchens and Hemingway held was misguided.

The study concluded that those who believe they’ve been drinking apply more lenient standards when evaluating their pieces. The authors of the study suggest that the quality of one’s work may become less relevant because a piece created while under the influence is not truly representative of one’s “true” ability.

These cognitive changes could be reason enough for the dismissal of any notion of perfectionism, and, in turn, allow the writer to rely solely on instinct as a way of working through the creative process. In essence, alcohol takes away the inhibitions that would normally drive us towards writing a piece that is perfect by some set of established standards.

Being able to easily shrug off criticism sounds like a grand idea in theory, but without criticism, there’s no opportunity to grow and learn. This reinforces the view expressed in the Florida State University study that drinking to somehow improve creativity and to produce better pieces won’t work.

The eight writers who partook in this experiment did so, so that no one else would have to. The point: alcohol does not make you more creative. All the creativity you expel at any state has been with you the entire time.

Of the eight people who showed, six decided to settle in with a couple of bottles of Absolut Vodka. One brave soul hammered down rum and coke, and the classiest of us all stuck with a bottle of white wine.

There were no control factors; I told everyone to get as lush as they would please.

Once thoroughly intoxicated, they sat down again to write. Fifteen minutes was set on the timer, but there was no tapping of fingers or brows furled in concentration.

In the first round, you could hardly get people to put the pen down. This second round saw a shift in mood as more people finished before the alarm sounded and there was no scrambling before the time was up to cram that one last sentence in.

This human experiment was nowhere near the level of professionalism that was attained in the Florida State study, but similar results were shown.

The once eloquently written sober descriptions, stories, and comparisons about an apple turned to nonsensical drunken musings.

With this lack of inhibition towards writing the perfect piece about an apple, the writers lost sight of the apple at the end of the tunnel and took a few left turns.

In fact, some pieces weren’t about apples at all.

The piece that really did strike a chord with me was a comparison poem about apples and love. The author (may you never know who it is) wrote a sober piece describing an apple. Once a few drinks were consumed and the piece was written, it became very evident that the feelings we carry with us when we are sober — the ones we refuse to talk about — are among the only things we can think about when we’re intoxicated. 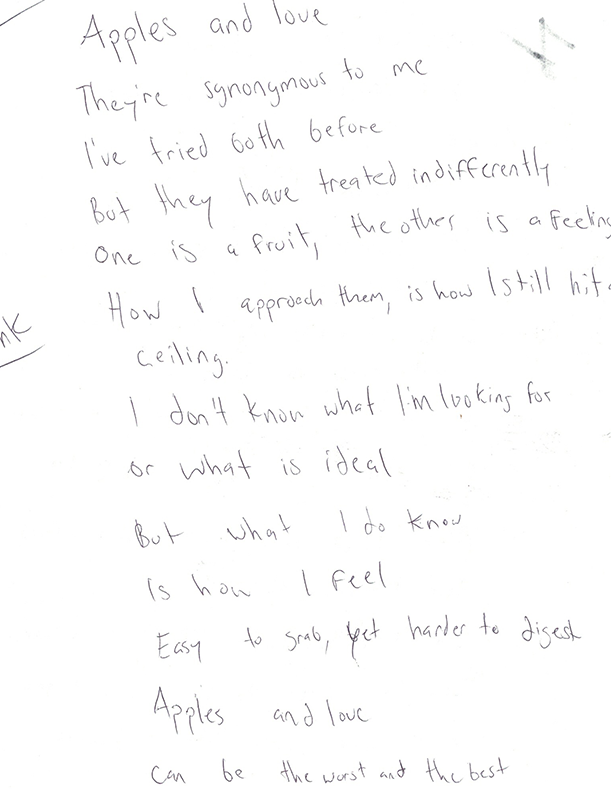 The allure of drinking to stimulate creativity is due to the fact that we can only seem to be brutally honest when we are drunk. In saying this, an honest piece does not necessarily equal a well-crafted one.

To grow and thrive as writers, and to foster and hone our writing skills, we must write sober. This is because drunken writing is not representative of the respected work one is capable of while sober.

Yes, drinking is fun: you’re still going to do it after reading this. Even so, please understand that you don’t need to rely on alcohol or any substance to “improve” or “better” your creativity. You will only impair yourself when creating drunk.

With all this in mind: have enough faith in your sober abilities to realize that you don’t need anything else but your own drive towards greatness to succeed.

In this experiment I didn’t dare to try and write. Sober or not, I just couldn’t do it. I distinctly remember looking at a sheet of blank paper and trying to muster up the courage to do something great with it. My mind felt like an old jukebox, waiting for something to give it a swift kick into gear.

There is absolutely nothing more torturous than being on the losing side of a staring contest with a blank sheet. Unorthodox data collection methods or not, who was I to ask a group of people to write for me? Who was I to make them go through the torture of not knowing what to write?

“How many minutes do we have left,” someone had asked, breaking the silence.

“Seven minutes,” I had said.

In those minutes I was too scared to pick up a pen, yet there I was asking my friends to write for me, and on a deadline nonetheless.

Feeling a dizzying combination of nervousness and anxiety I reached for the closest bottle to me, twisted open the lid, and held it over my lips.

Fuck, there I was, in all my glory. Another amateur writer pausing for dramatic effect while she makes a big deal out of drinking. The aesthetic of it all was just too painfully uncomfortable to take seriously and keep up.

I wasn’t attempting to drink because I wanted to be less anxious, or to cover the nervous feelings. I was posing to drink on the off-chance that a friend might happen to look over at me in my all-black outfit and think I looked poetic and tortured. Like what a real writer would look like.

Yes, because any writer worth his/her salt only came to be recognized for their talents by looking the part.

This five-second ordeal made me extremely uncomfortable. I saw right through myself, and became acutely aware of how phoney and fake I was being. I wanted to excuse myself to my room and tunnel underground as far as I could go.

The allure that I had to drink came from the exact notion that my poor experiment set out to mythbusters.

I became a subject in a sub-section of my own experiment, and the rational conclusion would be: trying to use drinking as a vice to “cure” deep-rooted insecurities only makes situations harder to handle.

“How much time do we have left,” a voice broke through my train of thought.

My eyes focused in on the blank sheet of paper. I built up a wall of confidence and snatched it with gusto from the table. That’s about as far as I got before running the paper to my room and shoving it underneath a stack of empty notebooks.

The rest of the night went off without a hitch. There was merriment, and no one puked on my stairs.

After everyone had parted, I sheepishly snuck back in to my room. The paper was still there. I snagged a hot pink pen from my pencil case and sat down at my desk. The words didn’t come immediately, and when they did come they were few and far between. But, my well of creativity hadn’t run dry after all.

I didn’t need a drink to create: I just needed the courage to pick up the pen.