Home » How to Create the Best Travel Instagram Feed

If you’re a traveller, you definitely have thousands of photos of your travels that you are just dying to share. The camera roll on your phone or your computer is overflowing with sunny beach shots, sweeping landscapes, colourful sunsets, and so much more. With social media, Instagram in particular, sharing your photos has become easier than ever before. The problem, though, can be putting together a feed that you love or that stands out against the countless other travel Instagram accounts.

You may be wondering how all these big travel accounts make their feeds look the way they do. There is a simple answer to this question: consistency.

The main way this is achieved is through editing each photo in a similar way, creating a unique style and making each photo fit together in the feed, even though each photo is obviously unique and can stand on its own. This creates a cohesive feed and makes it flow as a whole. Usually, this is done through the use of Lightroom presets! Some large accounts have created their own as they have been editing photos for a very long time and know exactly how they want their photos to look, but there are also endless amounts of presets that can be purchased and downloaded for those just starting out! If you have never used Lightroom presets and want to learn more about them, you can learn how to install Lightroom presets here!

Here are a few examples:

This account features photos of the founders in various locations all around the world. Each of their photos features bright – though not overwhelming – colours. From soft pinks to glowing reds and bright blues, this feed is a rainbow of colours. With so many colours, it would be easy to post these photos in a way that appears overwhelming and create a chaotic looking feed, but the owners of this account avoided that expertly. By carefully planning out when each photo will be posted and where it will fall in their feed, as well as a beautiful editing job, each photo fits together perfectly! As you scroll through, the photos flow easily and fit together like pieces of a puzzle!

Jack Harding’s feed is much darker than the one above, but he has created a consistent editing style as well. His photos follow a very specific colour scheme of mainly browns, golds, blacks, whites, and blues. They are then edited to create photos with strong contrast and very deep, bold colours. Because each photo follows the same colour scheme and is edited in the same way, they all look similar and fit together in the feed. Each photo is able to stand on its own, but when you are scrolling through his feed as a whole, they flow perfectly together.

As you scroll through Selena Taylor’s photos on @finduslost, you will find a collection of photos from her travels all around the world. She has travelled all around Europe, to tropical destinations, and everything in between, and posted photos along the way. She also has adopted a consistent editing style to make sure that her photos blend together no matter where they were taken. If you scroll down through some of her older photos, you can see that she has changed the colours of the photos she has posted, as some locations highlight other colours more than others, but what has remained consistent is the way she edits her photos. Because of this consistent editing, her feed remained cohesive even through the changing colours in her photos.

Polina’s photos are bright and colourful and full of interesting patterns found in all the different places she has travelled to. What pulls all of her photos together is the common colour in them. The vast majority of her photos have been edited in such a way that gold/orange tones are brought to the forefront and stand out in each photo. This common colour creates a cohesive feed filled with interesting patterns and beautiful travel photos! Another important element Polina has employed is balance. She carefully plans out the photos in her feed, and when she is posting one that may have a little less gold than the others, she balances it with another that has less gold as well, and keeps her feed consistent. 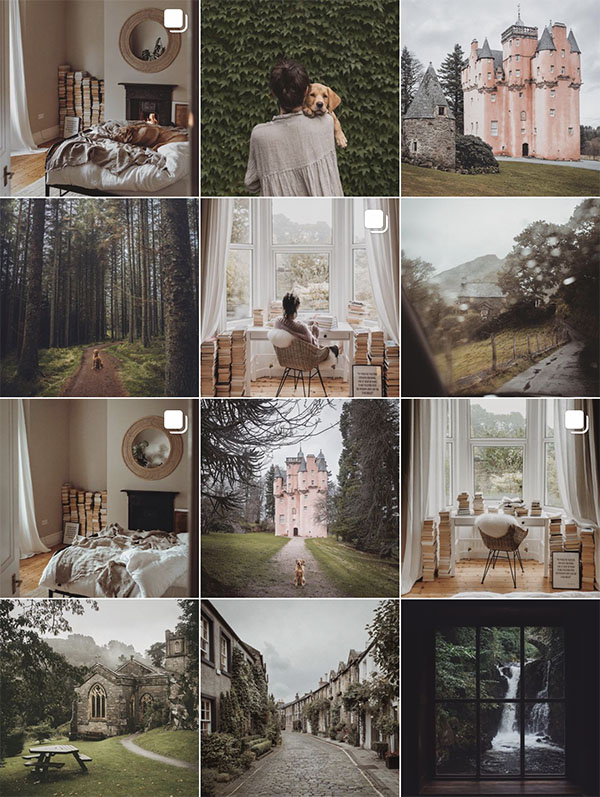 Carolyn of @theslowtraveler focuses on producing photos that contain neutral, earthy tones, editing her photos to create a warm, inviting feed. Her photos feature old European castles, deep green forests, and quiet afternoons in her backyard, and she carefully edits each photos to fit into her cozy feed. By editing her photos in the same way each time, she has created a unique style that makes her feed stand out against others and makes her photos recognizable.

Although creating a cohesive Instagram feed can seem like an intimidating task, it’s actually pretty simple. If you take the time to plan out your posts so that your photos are balanced in your feed – both in terms of subjects and colours – this will go a long way in improving the look of your feed. While doing this, make sure you also decide how you want to edit your photos! The best way to create a great looking Instagram feed is by editing each of your photos in the same way. Again, if you aren’t great with Photoshop or Lightroom, don’t worry! There are so many people out there that have created Lightroom presets for you to use. A simple Google search will turn up thousands of options for you that are either free or cost very little!

It is so much fun to play around with different presets and apply them to your photos, so have some fun and get creative! Once you’ve found one you like, start posting! Creating your own unique editing style will take your Instagram feed to the next level in no time at all!