Since we already use our phones as computers, it is not surprising that they could replace our wallets too. We will most likely get there one day, but as of now we’ve only evolved to the point of mobile banking through downloadable apps, while cards and cash remain the norm. But Kenyans are ahead of the game. They have embraced a system where currency can be exchanged through text messages using a simple service called M-PESA. Currently, Kenya is at the centre of the world’s innovation regarding the future of money.

M-PESA literally stands for mobile money (the ‘M’ meaning mobile, while ‘Pesa’ means ‘money’ in Swahili). What may be surprising is that most Kenyans don’t actually use a bank, but eight out of 10  Kenyans have a cellphone. So what is the easiest and safest way to manage and exchange money in a bankless market? Using a cellphone. It doesn’t even have to be a Smartphone, just your barebones basic flip phone, or anything that can be used to send a message on.

So why did this service develop? The corporate answer is this: in 2006 a UK telecommunications group called Vodafone wanted to try out a mobile money transferring service in the unbanked market, so they chose to launch in through a company called Safaricom in Kenya. The other answer is that it developed out of necessity.

Prior to the introduction of M-PESA, many Kenyans did not have a secure service to transfer or deposit money. As CBS News journalist Lesley Stahl expressed in a recent 60 Minutes broadcast, most Kenyans living in the city would send money to their families in rural parts of the country by giving a bundle of money to a bus driver travelling in that same direction. Once they arrived at the destination, the bus driver would give the money to someone who would be waiting at a specific spot. As you can imagine a lot of the money depleted before it even made it to its proper place and the system didn’t work very well.

The thing is in Kenya it does not make sense to have banks and M-PESA does not require them.  According to Stahl, most Kenyans make less than $2 a day. To purchase a cell phone and set up M-PESA, it costs about $30 American. There are so many M-PESA providers around the country that the service has almost become ubiquitous.

M-PESA is better than the e-banking apps you may be familiar with. People can use their cellphones for almost anything including buying a purse in the market, paying for a taxi ride and believe it or not you can even buy cows with M-PESA. It is also used to regulate payments for things like communal water pumps and solar powered electricity. Normally it would takes days or weeks for people to pay these bills, now it can all be done through a few simple clicks on a phone.

In any case, M-PESA is a good example of how a service that does not cost much to use can still turn a large profit. Safaricom makes $250,000,000 annually in Kenya off of the small service fee. You don’t have to be greedy to make a lot of money.

Currently, there are over 85,000 M-PESA agents across the country and over 90 per cent of the population or 19 million adults use M-PESA. According to Stahl, companies like Apple are looking into designing apps that users can use to easily transfer money. You’d think that the multitude of apps we already have would help us to do more practical things like pay for the bus or for groceries, but it has not happened in the rest of the world yet. 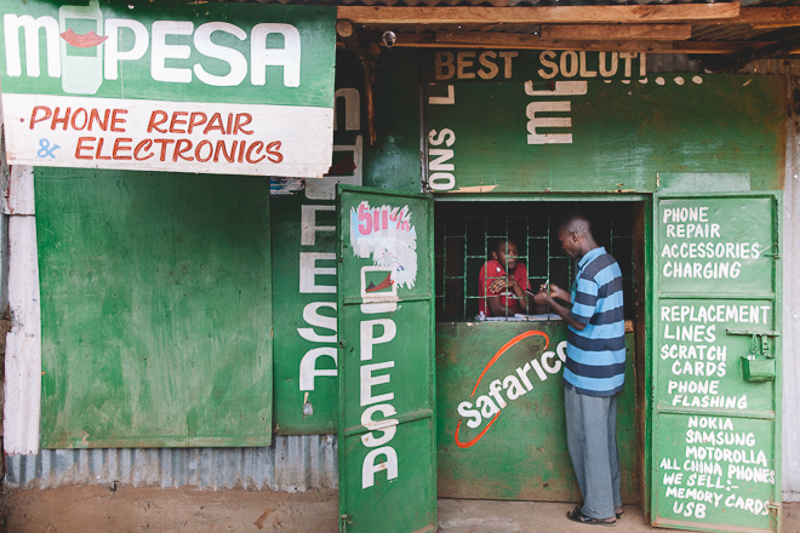 Not only is M-PESA a source of pride for Kenyans, it is an example for the rest of the world of how technology can be geared toward helping the greater good and expanding the economy of developing countries. M-PESA is expanding and has launched in other places as well, including India, Egypt, Romania and Afghanistan.

As Bob Collymore, Safaricom’s CEO explained in his interview with Stahl, M-PESA is a disruptor. Like Uber or Airbnb, it disrupts other businesses and services and people’s demand for them.

However I think a mobile money app would be more disruptive in the West because it is not an app that has developed out of necessity but out of convenience (and perhaps laziness too). This just goes to show how technology transforms, and sometimes disfigures Western societies to become obsessed with making their already-privileged lives more convenient.

No matter what, technology is disruptive; it will always enforce that classic phrase “out with the old, in with the new.” But change doesn’t always have to be bad, it can be embraced and that is exactly what Kenya is doing with M-PESA. Innovation does not necessarily mean the newest, sexiest or slickest phone, it means changes toward the better. In Kenya, that means bettering the lives of millions of people all the while becoming the world’s first “Silicon Savannah.”