All photos by Quin Smith

Outside of a village, outside of a city, far away from the hoards of tourists in Northern Italy, Quin Smith found himself looking into the crystal blue water flowing from the falls above. It was early July and while it was hot outside, the water was freezing, though that didn’t stop the village kids from sliding down the rocks into the small pool. It was Smith’s third day in the Cardoso region staying with the man he met the previous week on a train.

Smith lived in Hollywood working for a movie poster company when he was laid off. Finding his life at a crossroads he decided to follow his long time dream of backpacking through Europe, hoping it would help to clear his head. He embarked on a five-week long trip throughout central Europe spanning five countries. He was looking for something – some sort of adventure.

Smith met Thomas while enduring a evermore frustrating commute from Lake Iseo to Florence. The train had been at a stand still for hours leaving the passengers to fend for themselves as the crew was nowhere to be found. He started chatting with a squirrely looking guy who told him that he was working on restoring a 100-year-old farmhouse and invited him to join. The two parted ways as Smith continued on to sightseeing in Florence. While beautiful, Florence is full of crowds vying to see the statue of David and shop along the Ponte Vecchio. Wanting a different experience, Smith contacted Thomas to take him up on his offer.

He arrived in Pietra Santa, home to one of Italy’s oldest art universities. Thomas had studied there which was how he was familiar with the area. Heading away from the city and into the neighboring villages, one realizes that this isn’t a place that attracts tourists, “you only get to see places like this if you take the chance of going with a stranger,” said Smith.

The journey to the farmhouse led away from the village down a path now commonly used by wild boar hunters. The 15-minute hike was paved by stone pieces, which stuck out beneath the overgrowth. When you reach the house the door that you enter through is on the second level as the house sits on a slope.

The house was made of stone and some cement to keep it together, though the main force was gravity keeping the materials in place. The two stories were void of glass windows and the wet air flowed freely through the space. Most of the work that Thomas had done thus far was on the roof, which no longer collapsed in. Smith slept in one of the two rooms on the top floor on a double-thick air mattress that the space could barely contain. The bottom level had a dirt floor, part of which Thomas was in the process of digging up to build a bathroom. The current practice was to take a roll of toilet paper out into a bush. There was water that flowed north of the house which was harnessed into a hose for a very cold shower. 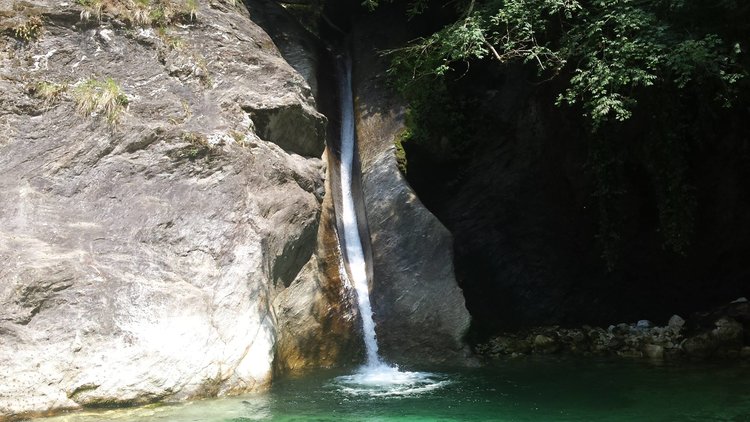 The lush environment and modest accommodations stood in stark contrast to the world in which Smith usually spent his time in. In the bustling city the billboards and concrete aren’t the only sign of what is valued in society. To Smith, Hollywood breathes an air of superficiality powered by the need to impress and stand out in a crowd – values he didn’t find transferred across the water. “I was travelling and experiencing a different world, a different way of living,” he said.

While there, most of his days were spent visiting with university friends of Thomas’, rarely eating alone. On more than one occasion Smith spent time with a family vacationing in the region. Sofie, Joakim, and their three children lived in Sweden and were looking to split their time between their northern home and a home in Cardoso. Joakim was a photographer and Sofie worked with community lead environmental projects. They told Smith how they had no issue splitting their year between two places because they didn’t feel connected to a community back home. Smith was taken aback by their honesty.

On days where he could grab some time to himself Smith wandered around the trails. Walking through the muggy air he would come across stone bridges and old catholic shrines among the greenery. Vipers slithered through the grass, they stood up and looked around, provoking him to quickly back away.

When he got back to California, Smith enrolled in school for environmental science. While he can’t pinpoint what in his travels, or whether his travels specifically, led him to the decision to not return to Hollywood, he feels that if he hadn’t taken the opportunity to travel when he did he likely would still be there. “It definitely had an impact,” said Smith, “it gave me food for thought on what I really want to do with my life.”

For his last dinner in Cardoso Smith gazed at a table full of pasta dishes, cheeses and bottles of wine, surrounded by a dozen people he’d met during his stay, all laughing and passing plates of pasta. “It was so without pretense,” said Smith, “I felt welcome as a part of the group, as a part of the family.”

When Smith tells friends of his story the response he gets is often how movie-like it seems. He can understand why people would think so but doesn’t believe it has to be as unattainable as people paint it. “Even though it seems like a once in a lifetime thing, if you’re open to experience I think stuff like that is bound to happen to you.”