Glassblowers are creating stunning bongs that combine function with art

Don’t drop that bong – it’s worth more than your car. Once an industry relegated to seedy tattoo parlors and sketchy gas stations, glass pipe making is quickly becoming a modern art movement. 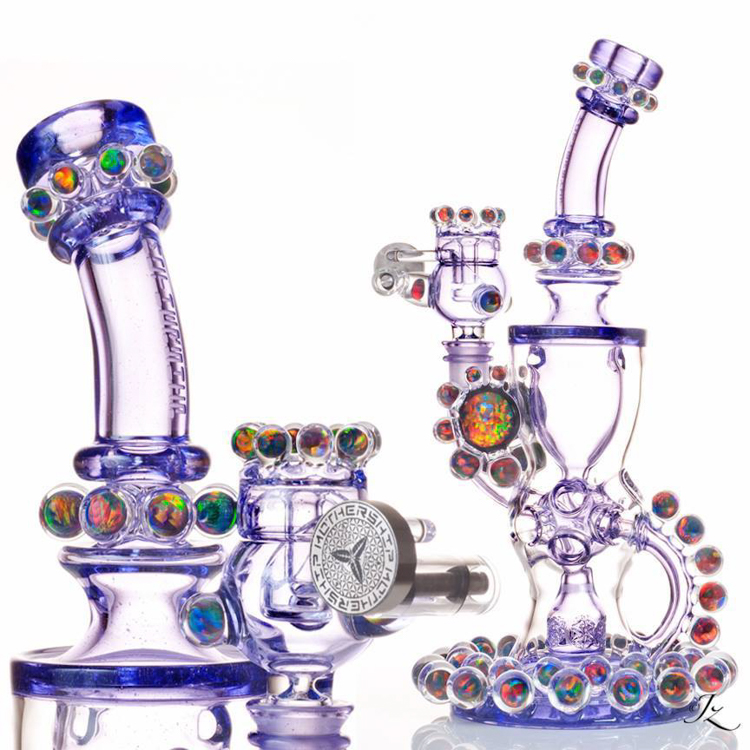 Nathan Miers, who works under the artist name “N8,” has been working with glass since 2002. When he began, pipe making was seen as taboo – both by society and the fine art community. Now, 12 years (and 27,000 Instagram followers) later his solo work sells out in seconds.

But these aren’t the $15 skull-adorned acrylic bongs your parents spent their teenage years toking out of. Miers says that, as an artist, his space-themed glass has a very specific purpose. “[I want] to remind people to look up at the night sky and think about what else is out there, to ponder our relationship with the rest of the universe.”

These aren’t the $15 skull-adorned acrylic bongs your parents spent their teenage years toking out of.

Despite the rocky start, North American pipe makers have experienced a boom over the past few years. Brands like Mothership have been able to thrive in the deregulated market, able to sell their standard models for up to $2,800 retail. Their one-off pieces can fetch well into the $50,000+ range.

A growing demand for Mothership’s pieces means that the secondary resale market can fetch up to 150 per cent of the original price. This, along with similar resale markets for other artists, has lead to the term “flipper” or “flipping” within the pipe making community. The term refers to someone who buys expensive pieces, only to quickly resell them for a quick (and often substantial) buck.

Many larger companies, such as Sovereignty and Toro, have plenty more readily available options in the $1000-5000 range.

Still, considering you can buy a house in Detroit for $100, that’s a lot of dough to fork over for a bong.

But there is a much deeper implication to the high (no pun intended) prices. Even in states where cannabis is legal, federal laws still consider the drug illegal. As a result, most banks (which are run federally) won’t touch legal pot profits with a 420-foot pole. Consequently, you get people investing hundreds of thousands of dollars into glass art. “Questionable” currency goes to a headshop or artist and the buyer gets an asset that can be easily liquidated for nice, legal cash – receipts and all.

For Devin Somerville, who works under the artist name “Cap’ n Crunk,” one of the biggest struggles pipe makers still face as artists is that, if their work is used to smoke cannabis somewhere it’s illegal, it becomes paraphernalia. However, he says that relaxed views on the drug have added legitimacy to the pipe-making industry. “People can feel a little safer about collecting expensive glass if they feel safe displaying it without worrying about police coming in and smashing it.”

But as state after state legalizes cannabis, Toronto pipe maker Keshav Gupta says it won’t be long until we stop seeing pipes as paraphernalia and start seeing them as art.

“History is going to confuse a lot of people. They’re going to say, ‘Why is it a pipe?’ when they see the $100,000 Banjo x WJC x Joe Peters collaboration. Why not? That was the market that supported him when he started, so he is going to be true to that.” Gupta has been working with glass for close to four years.

As cannabis becomes more accepted, pipes become less taboo. Degenerate Art is a 2012 documentary directed by pipemaker Aaron Golbert – who goes by the artist name “Marble Slinger.” The film deals with the ever-changing culture of glass pipe making and its place within society. The title references a German expression used by the Nazi regime to criticize non-conformist art.

But instead of deterring would-be artists, Miers says a previous lack of social acceptance helped to strengthen interrelationships. “We are the table of misfits at a square family reunion, and there is certainly some stronger-than-usual camaraderie as a result.”

Though he certainly wouldn’t call them degenerate, Somerville says pipes are unlike most art. “They have a way of holding a lot of sentimental value for an object [and] bringing a lot more smiles to peoples’ faces than the stuffy gallery things happening in today’s art world.” Miers agrees, adding that the pipe is an established cultural symbol. “It’s functional, so it’s used often. It’s collectible, so it’s cherished … it can even be a status symbol in certain circles.”

But though pipe making has become more accepted within the fine art community, Miers says that was never a specific goal. “It’s not our end goal to convert galleries and their patrons into avid supporters, as much as we’d just like to receive a little respect for what we do.” Somerville agrees. “We all feel that we’ve made a success out of it already. Anything else – it’s just icing on the cake.”

With success, however, comes imitation. Why buy a $2800 Mothership Fabergé Egg when you could get a knock-off for 50 bucks? In the past couple of years, many low-quality replicas of higher-end companies’ or artists’ designs have shown up in the online market. International online retailers like DHgate and Alibaba are especially notorious. It’s a real problem for an industry where copyrights and patents are rarely used.

Regarding the increased competition, however, Miers says bring it on. “In terms of a growing population of artists – competition inspires innovation, and I expect rapid acceleration in both.”

In all honesty, though owning a DMT-shaped pipe would be cool, I just want this bong-powered Rube Goldberg machine for my apartment.