Feminism has become the ultimate brand

Our society has commonly sexualized and misappropriated women’s bodies. Pornography often shows women and their bodies succumb to male whim. We have always used the female body to sell products like cars, movies and even food. Yet when Kim Kardashian willingly posted a nude selfie, many were quick to condemn her.

It seems that the sexualization of a female body is only accepted when it’s taken without permission. When it’s handed over on a silver platter, people seem to recoil. After all, since when did we allow objects to act autonomously? If a woman is confident in her appearance and wants to display it for the world to see, we are quick to blame it on immodesty or her brash, attention-seeking behavior.

But it’s also interesting to take note of how Kim Kardashian reacted to the backlash she received. She invoked “female empowerment” in an essay she posted on Twitter. To most people who have followed media coverage of the Kardashians, it may seem ludicrous to associate their image as symbols of empowerment. It seems that she was just exploiting the problems within our society (in this case, the feminist movement) for personal gain.

When criticized, Kim attacked other women on Twitter for their age and lack of fame, which is not a feminist move. Call it what it is—she wanted to show off her body to gain some attention.

But is this just another trick to use women to sell products? Capitalism will always be quick to pick up on the traction of social movements. First it was their bodies, and now it seems like we are diminishing their issues for the sheer purpose of marketing, and we are attempting to sell empowerment.

Dove’s Real Beauty campaign is seen as the pioneer of “femvertising.” Celebrities such as Pink and Ellen DeGeneres were quick to praise this original initiative, and it blew up quickly. In 2005, Dove’s sales went up by almost 20%, the year after the campaign was launched. Then, Pantene came along with hashtags such as #ShineStrong and videos which highlighted how women are walking apologizes without realizing it in most environments of their lives. 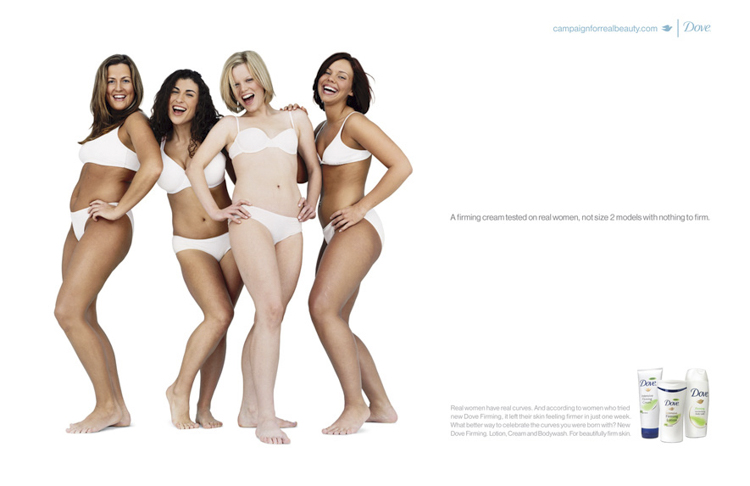 The thing is, these ads are working not only because of spunky young girls discerningly talking into the camera or women of minorities calling themselves beautiful, but because these videos carry specks of truth in them. They may be created to boost sales but they have earnest intentions and seem to understand the responsibility that comes with marketing. They are authentic without being condescending and so far, the feminist movement seems to be appreciating this.

The issue doesn’t lessen in importance when we intertwine it with advertising. By making their values parallel to one’s feminism is trying to spread, the dove beauty campaign increased sales to $4 billion today from $2.5 billion in its opening campaign year. But most importantly, it changed widespread perceptions and helped launch feminism into mainstream dialogue. This change in advertising is embodying male brands too. Axe’s new ad, Find Your Magic, features different portrayals of masculinity from dancing in heels to making pizza to a bearded man playing with kittens.

Even though Kim K’s stunt messily executed feminism, it’s an example of how capitalism and consumerism can be used as a tool for social change even if we are just jumping on bandwagons. If it wasn’t for her, the conversation about societal perceptions of a women choosing what to do with her body would have never sparked.

Her stunt led many to conclude that the liberation of women doesn’t start when society stops objectifying their bodies but when a woman chooses what to do with her body. An empowered women turns the tables and chooses to become the merchant of her vessel instead of handing it to a society that believes she exists for the preliminary purpose of consumption.

It’s not just about showing too much skin—in today’s age of feminism, a nude becomes a political message. It’s about commercialism, agency and rights. We’re so startled when women serve themselves, which proves that current feminism which is centralized around freedom and choice is still very much needed.

Perhaps a marketing campaign can’t close the wage gap or give young girls education worldwide, but it can get people talking and noticing things they would be quick to dismiss before.

The latest ad from Always is a home run. It’s about sexism within emojis, and it uses the power of statistics to back up its message. 70% of girls use emojis to express themselves several times a day, yet a survey of 1,000 women in the UK aged between 16 and 24 years found 70 percent of respondents believed emojis shouldn’t be limited to gender stereotypes. Young girls in the video commented on how male emojis are shown playing sports or having jobs, such as police officers whereas female emojis are dancing, painting their nails, and almost all of them are wearing pink.

Today where feminism has been misconstrued to the point where it’s seen as heretical by many, these campaigns are simple, easy to digest and blatantly showcase the glaringly evident that everyone has decided not to see.