Erykah Badu dropped her mixtape, But You Can’t Use My Phone last Friday, ending a five-year hiatus of releasing no new music. Among the usual psychedelic sounds that surround her production, which contains smooth jazz and hip-hop influence, Badu creatively uses her lyrics, and her voice, to explain that, “scientists have found the cause of the world’s sudden dying population of bees is related to cellphones.” Badu has been a vegetarian for over 20 years and is a known environmental activist.

On the song, Dial’Freaq, Erykah weaves her voice with sounds of bees buzzing in the background, along with sporadic beeping chimes that resemble the noises cellphones make—creating a feel of vibration and frequency that visualizes her message. The song’s intro details how, “the bees sync cellphone signals transmitted when the phones ring, causing them to emit heavy buzzing noises. This frequency confuses the bees, making them fly erratically. Bees use the earth’s magnetic field as a compass, but their navigation is now compromised by cell phone radiation, making it impossible for them to find their way back to the hive.”

After looking into it a bit, it turns out that Swiss researcher, Daniel Farve did a study of about 83 experiments in order to record bees’ reactions to cellphones. In his experiment, two cellphones were placed inside of five different hives, so that the phones could call each other in a setting that caused reactions from the bees. Farve recorded reactions to cellphones that were put on standby, being used to make a call, and phones that were turned off as a part of his many experiments. His results back up the neo-soul legend’s lyrics, as the study showed that the electromagnetic fields from cellphones cause bees to become disoriented and leave their home hives. Because they become confused by the cellphone’s frequency, they never find their way back to the hive, leaving them out on their own to eventually die.

A 2011 article written by Jenni Dunning of the Toronto Star reveals studies that showed “honeybees increased their noises by 10 times when a phone call was made or received.” These noises scientists call “worker piping” act as a signal for bees to leave their hives. The honeybees will create much more noise than usual if they feel they are disturbed or in danger of any kind.

As the song mentions, bees leave their hives when the cellphone frequency disorients them, and the study shows us that about 43% of bee deaths happen when they are unable to return to their hive. However, Badu is quick to point out that, “it is unlikely that the world will ever, ever, ever relinquish the convenience of cellphones.” Unfortunately, that is the reality of the world we live in today, but we should also be aware of the fact that bees pollinate most of the world’s crop species, which means we could lose 20,000 plant species in the next few decades if we’re not at least mindful. The song, like the rest of Erykah Badu’s tape, is a smooth listen with a creative way of raising awareness about this environmental concern. 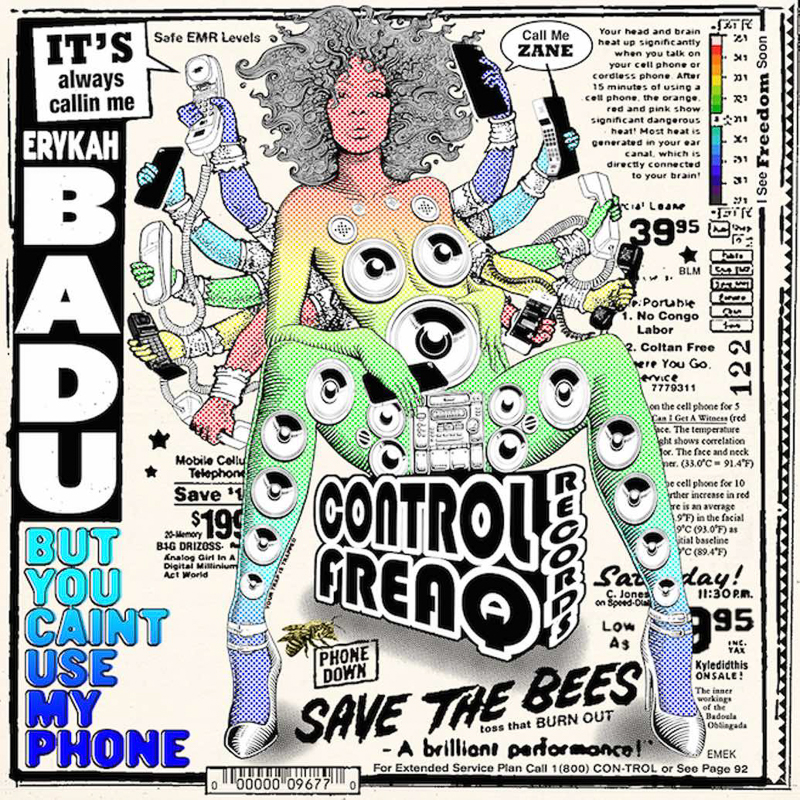