Volcanic copper spreads across the landscape catching lightning from the storm overhead. Electric bolts get closer and closer. On another day, feet freeze mid-run as baby black bears tumble across the trail. Guillaume Arthus uses the word “epic” to describe his cross-America trail-running road trip. It’s true, a journey like this marks a life. The French student was finishing his studies in finance from smack-dab in the middle of Illinois when he dreamed up a post-grad trip that would marry his passions of film-making and running. The result became Journey, a 22-minute documentary of Arthus running the U.S. national parks. Forty-seven days, 26 U.S. national parks, elevations plummeting below sea level and rising to 14 thousand feet, snowed-in forest trails and baked desert grounds became the stuff of the documentary— filmed, financed and finished by Arthus himself. A look at what went on between shots:

So this idea started off as a way to explore America before going back to France. Tell me about the preparation.

It was a lot of planning. I think I spent more time working on the project than actually doing it. I was like ‘OK I want to do this and now I realize I don’t have the budget’ and so the struggle started. I worked on the project 200 or 300 hours before starting and at that point I didn’t even know if I was going to be able to do it. I knew about three weeks before. Someone joined me and that helped because you divide the gas by two, the housing by two, it just solved everything in the equation. 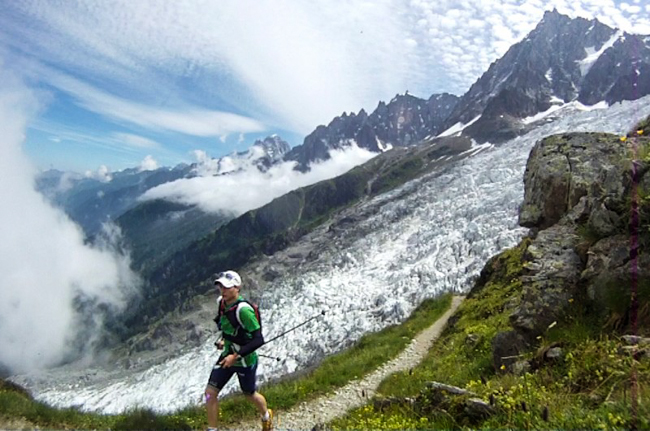 Who was that person?

I met her at the university next to me. She’s now my girlfriend. I knew her and we knew we could stand alone together for a long period. She wanted to do something for the summer and never had the chance to see any national parks and so I took her on a ride. It was basically a 10 thousand mile ride. Camping for 47 days in a row, it was just something epic.

SEE ALSO: Skyrunning is the brave and burly cousin of trail running

So you filmed and edited this by yourself. Tell me a bit about the making.

I studied video making years ago. It was just small stuff. So I got limited experience but I still had it so I thought ‘OK why not do it myself?’ Video editing took me a full month and I was working six hours a day and I had regular work so I’d get off work and then work each night and 10 hours each day on weekends. I’m quite happy with the final result. I got feedback from all over Europe which was insane and even from New Zealand, Australia, the U.S. and Canada. I have someone from Moldavia, producing a festival of trail running videos and who now want me in it. That’s really cool.

You had so many experiences compiled within a short time period. It’s also a large country— a country you’re not even from. What does that leave you with?

It changes you a lot. I was in the U.S. for a year and a half but I didn’t travel that much. As for trail running, I started that to explore being by myself and discovering new places. That process and inspiration started in France. It means a lot to me because I love that sport and I love being able to share that. The back to reality was really hard because in the space of seven days, I left my girlfriend, I left the country and then I started a new job in France. The shift was a huge shock. It makes you grow a lot.

What are some things you saw out on the trail?

There are things like the crossing of the Grand Canyon. It’s insane. It’s marvelous. It’s beautiful. Every single trail runner on the planet has to do it. It’s basically a reverse mountain. You have the giant playground of Redwood near Seattle, on the coast. You’re in a tropical-ish forest and 10 days before you were in Badwater at Death Valley below sea level. During the trip I went below sea level and up to 14,000 feet. I got snow, I got everything. I was in one of the northern parks really close to Canada and there was snow everywhere on the trails. No one had been there for maybe a month and a bald eagle was taking off from a fishing trip. At the moment you don’t have your camera on but you have it in your mind forever. And caves. You get there with a headlamp and it’s pitch black and you are just in it and then you go up the mountain the same day. Every single experience by itself is crazy and then you compile them in a short period and that makes something you never want to forget. 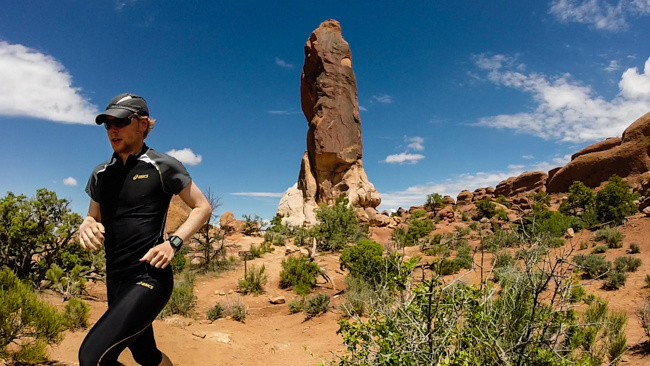 How did you run and manage to still get the shots you wanted?

Sometimes I had a camera tied to myself. Sometimes it was on a running pole and then you learn how to move it so that it doesn’t shake at all. It’s really hard to do. I imported the first GoPros in France when it wasn’t distributed anywhere. So I’ve been doing this for a long time now. You basically know when the shot is going to be good. It’s on a pole so I sometimes stuck it in the ground and do some back and forth [running] so I do two or three shots and then I keep going. There were a few people who helped me by holding the camera too.

Ultra running is a lot on your body and then you’re also doing this project. Was it ever stressful?

There were a lot of stressful moments before the trip. There was no low point on the physical point because I was training. I was prepared. It’s almost a half marathon a day but some days are only a couple of miles and some are really long. I had some low points coming from the weather. Trails were actually closed because there was too much snow that was also the case in The Rockies. You plan everything for months and then you have to cancel things at the last second. There’s no way everything’s going to happen perfectly and I was prepared for that.

How did the budget for this come together?

I contacted companies but since I didn’t have any previous experience to show it’s very hard to have people believe in your project. Through a couple of corporations I could have raised a thousand bucks, but for only a thousand bucks I thought I’d rather [finance] that myself and claim that I’m independent. I also received something like just below $700 from strangers and then I had friends coming in too and I had family helping and I basically finished the budget most of it coming from my own pocket and when I knew I was going to do the trip, I started eating pasta and not going out and that’s how I got it. Crazy project, crazy measures.

I am a hyperactive. I work on the videos and create trips (I’m planning a new one for next year) and also, my real job and then on top of that, I have 10 hours a week where I’m running. Five times a week, I’m out on the trails. I sleep a little. I like projects and that’s what defines me. From the money I invested in the project, the return moneywise is so low but on the human side, I learned so much and I met so many good people on the trails.

Where are you running now?

I live next to the woods near Paris and that’s in my backyard. I can run next to the river. I have some stuff to do here. Sometimes I go to Paris by night and that’s my long run on the weekends. I leave my house, I go to the Eiffel tower, I take a picture and then I go back and that’s 20 miles.

How do you make time for it?

I just make it work. I have a good job. So I can take time off in the lunch time to go to run but of course I do longer hours in the night. As for social activities, I don’t go out in the bars because when it’s 11 p.m. at night, I’m running. It’s a busy time schedule but if you want to make it fit, you don’t have any other way to do it. There are a lot of sacrifices. To do the trip I made so many sacrifices. It’s all worth it and I would do it again twice.