Comedian Paul F. Tompkins talks about the impact of political correctness in comedy

He’s the actor you can’t always place (“Wasn’t he that teacher in Weeds?”), but for years, Paul F. Tompkins has been one of the busiest comedians in the U.S. Not only did he host four seasons of the puppet-heavy talk show No,You Shut Up! on the Fusion network, but he’s starring in streaming network Seeso’s Bajillion Dollar Propertie$, and is a regular on Scott Aukerman’s Comedy Bang Bang podcast.

Tompkins has also been behind a few popular podcasts of his own, such as the now-defunct Dead Authors Podcast and his weekly improv show Spontaneanation. He also just wrapped a 20-city tour with the Comedy Bang Bang crew across North America.

Even a brief listen to Spontaneanation will convince you Tompkins is one of the sharpest minds in comedy, especially when he enters the improv arena. He’s smart, charming, and plays off of other comedians brilliantly.

I spoke to the Pennsylvania native about the impact of political correctness in comedy, what encouraged him to invite dead authors to a podcast, and his take on the rise of Donald Trump.

What inspired the Dead Authors Podcast? Did you find it risky to roll the dice by asking the average comedy fan to appreciate intricate literary improv?

Paul F. Tompkins: In 2010, I was asked by [the non-profit writing organization] 826LA to take part in a “Dead Authors Reading Series” at the West Hollywood Book Fair. 826 had done these Dead Authors shows before—a guy named Jon Korn came up with it: Someone pretends to be a famous dead author and they take questions from the audience. This time, there would be three: comedians Jen Kirkman and Eddie Pepitone as Sylvia Plath and Henry Miller, respectively, and I’d be H.G. Wells.

We weren’t quite sure how it would work with three of us, and I volunteered to moderate it in character. It was so much fun that I immediately asked 826 if I could make it an ongoing show at the UCB Theatre.

This project was unique in that I had to host it in character, improvising in a foreign accent, and do research on dozens of different authors.

Your work on Spontaneanation really showcases your love of improv—what is it about that style of comedy you find appealing?

P.F.T: I love working with other people to create something out of nothing, and to challenge my colleagues. That is really commendable, to be challenged and go in unexpected places, and that’s what improv is to me.

If you’re serious about your craft, you keep your mind open to all disciplines and try things that will intimidate you. I feel like improv is throwing myself into the deep end to work with the best people in comedy, and that brings my game up. 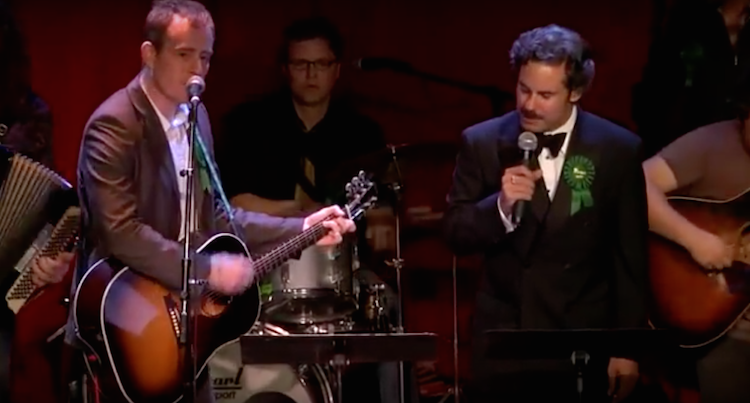 I caught your one-man show Crying and Driving in Toronto, and it was remarkable to see you reveal very personal details about your life. How did you feel about bringing a semi-serious and vulnerable tone to your comedy?

P.F.T: It was a satisfying feeling. I first did that with You Should Have Told Me [in 2010], where I told stories from my own life; feeling that connection with the audience, it was the same experience I went through with Crying, and it was very comforting to know that so many of us experience the same emotional things and it shrinks the world a bit. And it makes me feel like there is hope for us after all if we can relate to the same dumb things and live through it.

You recently spoke about political correctness in comedy in this YouTube video, which got quite a bit of attention online. What inspired you to tackle this topic?

P.F.T: I feel there’s a knee-jerk reaction from comedians saying censorship is infringing free speech. It’s a dialogue. And people on both sides should understand that, and this is the beginning of a conversation to try to understand each other.

Right now, due to social media, everyone is yelling at each other. Arguments need to get more nuanced, but it can be difficult to do. Comedians can say what they want to say, and joke about what they want to joke about, but they should be very diligent getting points across so they don’t just drop a shitty exploitative joke. My feeling is if a comedian has done his bit by doing enough homework to get that joke across, he can stand by it and don’t apologize to anyone.

On your show No, You Shut Up! you joked about politics in a campaign season that’s providing no shortage of fodder. What’s your take on the presidential race so far?

P.F.T: There’s lots of ugly stuff. What America needs to do is have a better civil political system. The Republican Party created Frankenstein and the media helped a lot. The media shouldn’t be cutting away from actual news to go to an opening sentence of a self-aggrandizing Donald Trump speech.

Some comedians have said a Donald Trump presidency would be great for comedy. Material for days!

P.F.T: Sure, but it won’t be so good for Americans. Comedians are forced to joke about horrible things and with Trump, you can be sure there will be many horrible things.