Electronic-pop collective, First Rate People have been painting their name across the indie sky leaving music lovers with the same sublime buzzing that one feels resonating after the settling of the perfect summer storm. With their bouncy production style and introspective lyrics, First Rate People shapes melodies like bear traps, holding listeners in a groovy trance that moves both the mind and muscles simultaneously. After gaining notoriety from indie trendsetters Pitchfork and la Blogotheque, and after receiving personal encouragement from famed music-makers like The National and Born Ruffians, it’s safe to say that First Rate People is already riding the express elevator to success. Recently, I chatted with one of the collective’s main songwriters, Jon Lawless, to gain some insight into the band’s latest developments and speak about their latest full-length release, Everest. 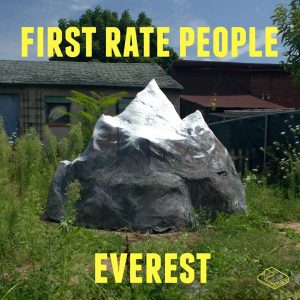 Rather than define themselves within the traditional fences of strict band formation, First Rate People maintains itsimage as more of a collective then a band. With a foundation of six core members and 25 different musicians featured on the new album, the collective stays true to the idea that diversity spawns strength. Lawless says, “We look up to bands like Broken Social Scene, who create with this sense of ubiquity. We have a strong commitment as a group but we encourage people to do their own thing. We don’t really like to put creativity in a box.”

The collective’s variety has certainly worked to its benefit, creating a collage of perspective with influences that range from LCD Soundsystem to Joni Mitchell. The newest release, Everest, forges a hybrid from electronic and folk roots to create a masterpiece of intersection between two genres previously thought of as oxymoronic. Lawless says, “Our lyrics seem poetic and existential but the energy of the music really elevates it. They work together to create this sort of sad-dance music.”

Originally planning on a self-title, the name Everest was initially just a working title. The name stuck after Hayden Stewart came up with an intensely creative idea for the album art, meant to visualize the collective’s self-made-motto. “Our Everest doesn’t look like the real one. We ended up building our own mountain out of papier-mâché in our friend’s backyard,” says Lawless.

Liam Sanagan took this collaboration initiative a step further with the birth of Bedroomer, a virtual boutique record label that works as a platform and online distributor for First Rate People and their various solo projects. Some of the collective’s alternate musical personas include LUM, LOKO, Swim Good and Eytan Tobin. Lawless comments, “People are gonna have negative comments or express hate regardless of whether you change or stay the same. It’s more fun to change and Bedroomer really allows us the room to grow.”

Recently, First Rate People signed a distribution deal in Japan with Inpartmaint Inc., further increasing the band’s steadily growing international presence. Already having a North American tour under their belt, expansion across the ocean only seems logical. In the upcoming months, fans can look forward to the release of member’s solo projects allowing them to become more familiar with the individual tastes of the artists who together create an intensely satisfying musical buffet. Stay tuned to www.bedroomer.com for approaching release dates and to get your copy of Everest, this (MD) Music Doctor’s prescription for the dance-diseased and poetry-addicted.