Chinese fishermen are destroying the Philippine-owned coral reefs that line the Spratly Islands. The islands, which are surrounded by the South China Sea, house vibrant coral reefs that are becoming decimated through deliberate destruction. While the claims were initially believed to be propaganda fuelled by conflict between the two nations, the BBC’s follow-up report discovered that there is considerable damage in the seas.

“This place had once been a rich coral ecosystem. Now the sea floor was covered in a thick layer of debris, millions of smashed fragments of coral, white and dead like bits of bone,” wrote Rupert Wingfield-Hayes of BBC News.

The fishermen chained their boats to the reefs and revved their engines, using their propellers to break the formations.

“It was murky and filled with dust and sand. I could just make out a steel propeller spinning in the distance on the end of [the] long shaft, but it was impossible to tell exactly how the destruction was being carried out,” added Wingfield-Hayes.

Upon further inspection, Wingfield-Hayes noticed that it carried on for hundreds of metres, with piles of shattered coral branches.

“The result was clear, though. Complete devastation.” 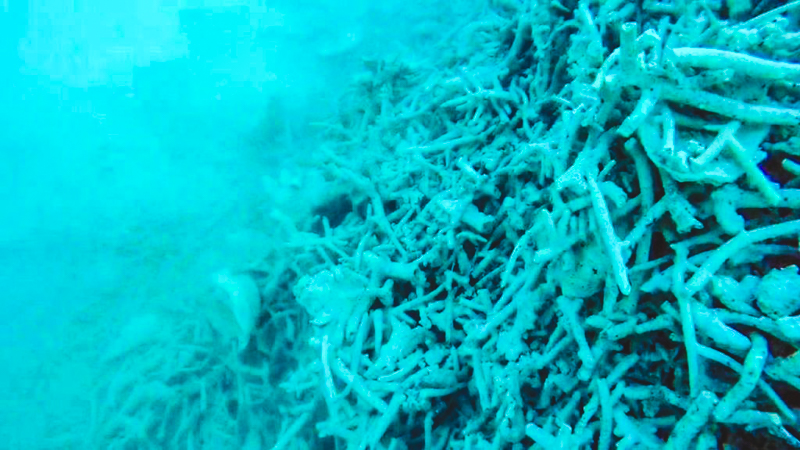 The exact reason why the fishermen are intentionally destroying the reef is not known. However, it is suspected that the destruction is part of a larger poaching operation to obtain giant clams over three feet wide. The clams, which are approximately 100 years old, sell for $1,000 on the black market.

While the Chinese government is not condoning the practice, efforts to imprison poachers were contested by the Chinese Navy. According to a Philippine Marine Corps officer, the destruction of the reefs has been going on for over two years. Despite the evidence captured on camera by Wingfield-Hayes, the Chinese government insists that their fishermen are not performing unlawful practices.

“The relevant report is severely biased and misleading,” said Chinese Foreign Ministry spokesperson Hong Lei. “The Nansha Islands [which are apart of the larger Spratly Islands] are China’s territory. China cares about ecological protection of relevant islands, reefs and waters more than anyone.”