Jeffrey Durkin is trying to avoid security on the rooftop of a mid-construction San Francisco parking garage as we talk on the phone. It’s not a situation that’s entirely out of the ordinary. With a history in street art, witnessing the rise of the West Coast scene, Durkin is a guerrilla filmmaker who’s an expert in being places he shouldn’t.

In 2011, he found himself in a border town in Burma (also known as Myanmar)—a pariah nation known for decades of suffering and segregation. In Mae Sot, and the region bordering Thailand, armed ethnic minority groups are facing government offensives. As of May 2015, there are at least 662,400 internationally displaced persons in Burma.

The first Burmese national election in 20 years took place in 2010, hypothetically ending a military dictatorship that had been in place since 1962. But with an entrenched military veto power—thanks to a constitution enshrined by the junta in 2008—true democracy became a pipe-dream and the country became snared in a bear trap halfway between military and civilian rule. With serving generals holding three of the most significant political posts and 25% of the seats, residents of the country are finding alternative ways to speak through a muzzle.

The premise is simple; when a government isn’t going to promote or fund any artist that isn’t a mouthpiece, street art is a way of saying, well if you’re not going to let me participate in the conversation, then I’m just going to spray the discussion right in your face.

With just DSLR cameras and cans of spray paint, Jeffrey Durkin, Jeff Katz and Ryan Roco began documenting a movement of street artists and punk rockers risking prison and torture to speak out.

Filmmaker Ryan Roco, an American of Filipino descent, shaved his head and wore local clothing to embed into local communities without drawing unwanted attention. He witnessed first hand government airstrikes on civilians as a display of power.

“Burma is taking it back to the roots of punk rock and graffiti. These art forms were birthed out of rebellion from impoverished and oppressed communities. We discovered it 30-40 years ago and now Burma is in this period of discovery with punk rock and street art, using it for grassroots politics—for what it was before it was commercialized and sold as a commodity in the United States,” says Durkin.

“In Burma, it’s raw communication. It’s not about aesthetic. It’s about message. The early artists of the New York underground weren’t great either; they would just spray their names on the side of a train. In Burma it’s not about colour scheme or composition or portraying characters in surrealistic ways. It’s all about protest and showcasing social struggle.” Says Durkin.

In a country where the average income is below $300 a year, street art is not only the most appropriate art form, but also the most accessible. This is the main thought behind the Brilliant Burma School of Art— street art and graffiti is the only visual art movement ever created by youth for youth. The school gives students—many of whom have been affected by Burma’s large-scale heroin trafficking industry—the opportunity to contribute to the push for real democratic reform through grassroots change making.

Generation Wave is one of the youth-led underground activist groups challenging government oppression through street art. Members are between the ages of 18-35, and use aliases to hide their identities. 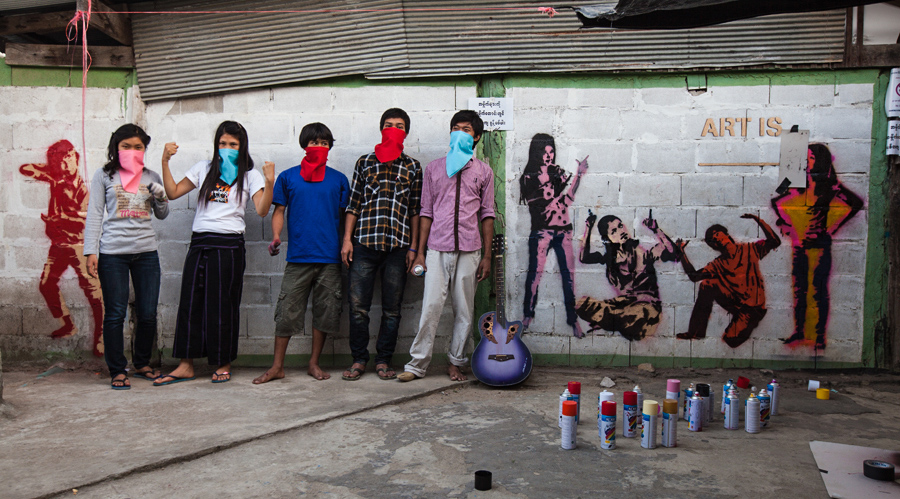 Generation Wave used underground smuggling of CDs and graffiti to call for the release of Aung San Suu Kyi, a pro-democracy advocate who was placed under house arrest by the military dictatorship. Suu Kyi  can be described as the “Nelson Mandela of Burma” and was imprisoned for 15 years after her party, the National League for Democracy, won the 1990 election in a landslide victory. As a result of publicly calling for her release, over half of Generation Wave’s members were held as political prisoners.

In 2007, basic food goods increased in price by 30-40% in a country where already one in three children is chronically malnourished. This, in conjunction with a wedding video showcasing lavish lives of closely held military circles and a bloated military budget, sparked the Saffron Revolution—a series of protests led by thousands of Buddhist Monks and students in Yangon. Despite the fact that the protests followed the principle of non-violent resistance, several hundred people were arrested and substantial, but unverifiable numbers of people were killed.

As Jeff Kingston writes, “The Saffron Revolution is Burma’s 9/11; much will never be the same.” After the government crackdown, the people became painfully aware of the military’s intention to hold its grip on power, and even more motivated to loosen it—even if that means holding their hands to the stove.

OBEY founder and street art giant, Shepard Fairey, used Burmese iconography and images to draw attention to the plight of Myanmar. Artists like Fairey and Banksy have inspired Burmese youth to take to the streets with spray paint.

Orwellian censorship laws have pushed youth to experiment with new ways to challenge the dictatorship. Punk Rockers, Street Artists and Rappers are using art to slip in references to political struggle.

Artists often use cryptic messages and symbolism to slip past Burmese censors.

Burma is still an epicentre for ethnic conflict and modern day slavery, with over 1 million Rohingya Muslims being denied basic rights and citizenship. More than 100,000 have been confined to camps.

In the words of West Coast street artist Saber, “Without graffiti there is totalitarianism.”

Political prisoner and pro-democracy advocate Aung San Suu Kyi has since been released, and will be running for the Myanmar Presidency in 2015.

Art As A Weapon is the award-winning documentary by Breadtruck Films and The Plaid Zebra chronicling the rise of the movement.