When the last planes flew out of the Berlin-Tempelhof Airport they left behind acres of barren land. 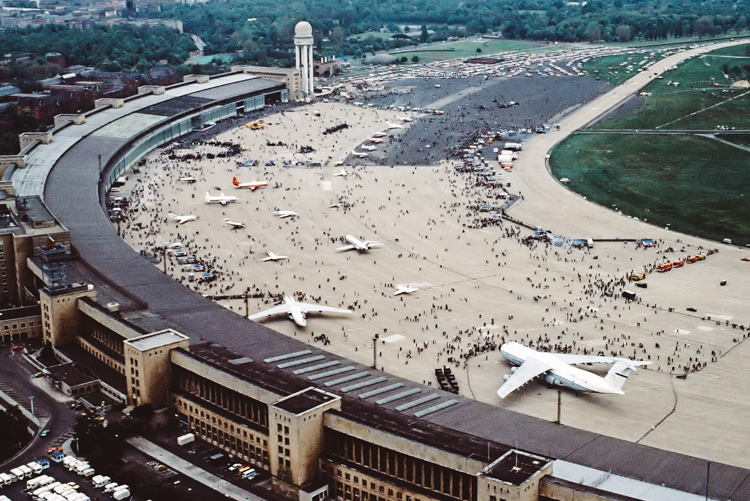 The airport was one of Europe’s three largest pre-WW2 airports. It was further developed and extensively used by The Nazi government during the war and was also used as main terminal for American aircrafts during the Cold War. But in 2010, the dark-political history of the 1920s airport got a beautiful make-over when it was converted into a multi-use public space and renamed Tempelhofer Field. After laying vacant for two years, the 909 acres of land became Berlin’s largest park—so large that New York’s Central Park could fit inside it.

But that’s where the comparison ends. Tempelhofer’s appearance is slightly less picturesque and more post-apocalyptic. Park goers picnic, play and layabout amongst asphalt runways and airport aprons. By hosting music festivals and annual kite-flying competitions the community has turned the barren land into a social hub.

But rather than let developers have at it, Berlin decided to turn it into the city’s largest public park—so big that NYC’s Central Park could fit inside it.

Outside, locals build communal gardens in the airfields, that grow sunflowers and vegetables in the spring. People barbecue in the picnic area or throw frisbees on one of the two asphalt runways. They choose to bike, or jog on the 6 km trail that runs throughout the park.

Inside, what was once an airport terminal serving as a lifeline for West Berlin in the Cold War, is now a community centre used for office space, a kindergarten, a dancing school, and a revue theatre. It’s also used largely by the Berlin Police and the military.

This transformation is exactly the step that Danish architect and professor, Jan Gehl advises cities to do to decrease feelings of social isolation that modernist city planning instilled into the urban living environment. Gehl’s studies have found that in the 1960s when the industrial world started mass producing cars and rolling out suburbs, around the outskirts of cities like cheap carpeting, post-war modernist city planners stopped designing cities around the people who live in them and started designing them around city traffic and maximized dwellings. But with the densely populated metropolises and endlessly congested roadways, today we understand what the modernists didn’t—you can’t design your way out of traffic.
“Ever since the car rolled in, it is as if we’ve forgotten why it is we had cities… It is arbitrary, the level of traffic in each city. It is silly to add more roads, you’ll only get more traffic,” Gehl said at a lecture in Toronto.

The change in city-landscapes forced people to drive more and walk or cycle less. Cities like Melbourne were left with a city centre that was relatively empty on weekends and busy during the work week — because no one wanted to live where they couldn’t interact with other people.

The reality is that public space is vital to human happiness—so innovative city-planners have begun turning ugly commercial spaces into beautiful social meccas.

Similarily, Times Square in New York City was consumed by a sea of yellow taxis, all stuck in traffic. Eighty-nine per cent of the square was taken up by vehicles.

In a move towards designing cities with human satisfaction in mind, Melbourne converted their alley ways into Venetian style streets loaded with cafes. New York committed to a redesign project in 2012, aiming to transform the square into a “world class piazza” by 2016 that would include places for people to sit.

A shift in focus — planning cities around people instead of cars — is giving urbanites a taste of what their cities would feel like if humanity took precedence over concrete.

“Good architecture is not about form it is about the interaction between form and life…you don’t get a city by dropping a number of towers next to each other and a freeway,” Gehl said in Melbourne.

Cities like Melbourne, New York, Copenhagen and Berlin that have shifted towards Gehl-style city-planning have already seen the benefits. More people walking and cycling — contributing to a healthier society and less polluted environment. They’ve also seen surges in tourism and real estate markets.

Tempelhofer Feld Communications Coordinator, Evelyn Bodenmeier told The Plaid Zebra that the neighbourhood around Tempelhof Feld has seen a rise in pubs, cafes and gallery spaces.

“There is a good spirit in the air,” she said. “But a lot of challenges too.”

The challenges Bodenmeier refers to are the need for more affordable housing in Berlin, and the recent stream of refugees coming into the country.

But now, the government is trying to take back some of the Tempelhof land that they gave to the people.

During local elections in 2011, plans were proposed to develop 25 per cent of the park. The community fought back and were able to protect their beloved communal space. A conservation law has been put in place to protect the space and maintain its community-driven status, but the future of the park is still unknown.