Trash-filled shrine dedicated to a saint known for her breast milk hosts over 500,000 pilgrims a year

Home » Trash-filled shrine dedicated to a saint known for her breast milk hosts over 500,000 pilgrims a year

Nestled deep in the Argentinean desert, there is a town-sized shrine dedicated to Difunta Correa, a woman believed to have breast-fed her newborn child even after her own death.

According to legend, during the Argentine Civil Wars in the mid 1800s, the army recruited a man by the name of Bandilio Bustos and forcibly took him from his home in San Juan province to La Rioja province; some 450km away. His wife, Maria Antonia Deolinda Correa was so distraught at the thought of her husband leaving, she decided to follow the military’s path – with her newborn baby in tow – to La Rioja. However, after suffering from exposure and lack of nourishment, she died on top of a San Juan hill.

A few days later shepherds, intrigued by the hovering birds, approached Correa’s body. What they found was not only a deceased woman, but a healthy baby, having survived on his mother’s seemingly endless supply of breast milk. The shepherds buried the mother in what is now Vallecito (the town actually sprung up because of the shrine), and took in the baby as their own.

Some time later, another shepherd who had recently lost his cattle happened upon Correa’s tomb. In a moment of desperation, he began to pray to Correa that he would be reunited with his cattle. His request was fulfilled.

About fifty years later, a well-known and respected gaucho, Pedro Flavio Zeballos, was travelling with about 500 cows when a storm struck. He hid them under shelter but worried that his reputation would be tarnished if the cattle were lost. Having heard about Correa’s tomb, he went there to pray. He promised that if his cows were returned to him, he would build a chapel near the tomb. He did.

A legend was born.

By the end of the 19th century, people from all over Argentina and Chile began making the pilgrimage to Correa’s tomb. They would ask for help in exchange for a promise. Soon, the site became known as Difunta Correa (Deceased Correa) and was a place of great cultural importance. 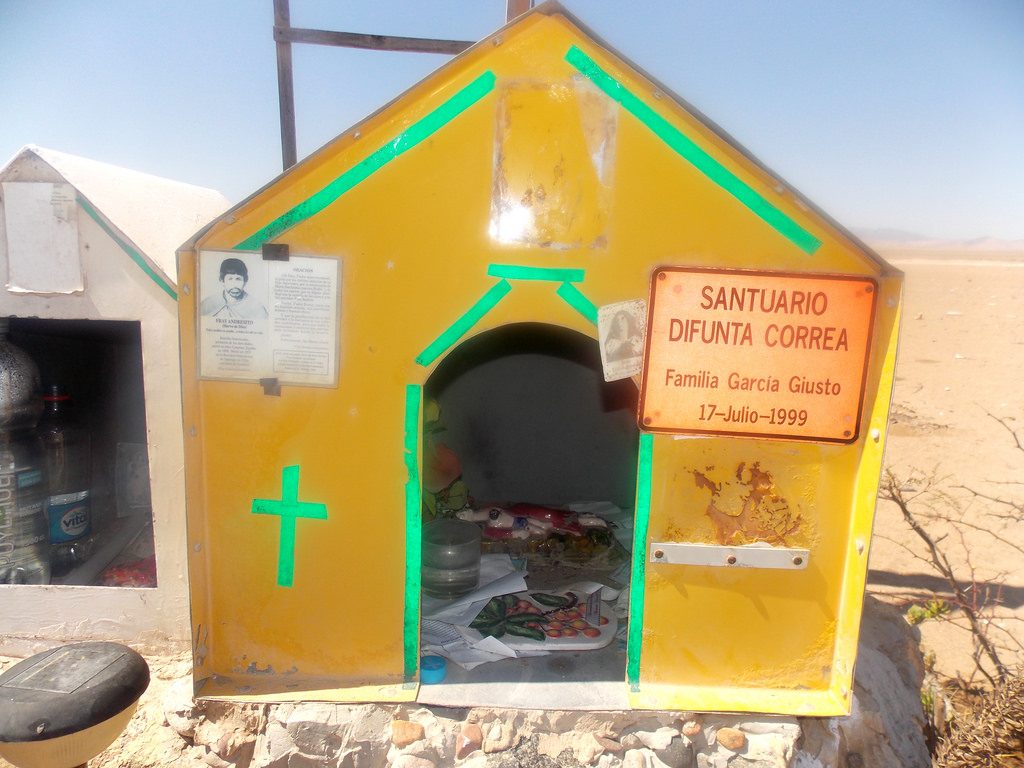 Pilgrims would visit the tomb of Correa twice.

In later years, an extra thirty chapels were built for people who prayed for specific topics. There is a sports chapel, an army chapel, a brides chapel, a police chapel, etc.

Today, restaurants and souvenir shops scatter the desert landscape between the chapels. It has become not only a place of pilgrimage, but a tourist destination as well. In fact, over 500,000 people visit Vallecito each year.

Water bottles, licence plates, record players, boxing gloves, jewelry and all kinds of trash are piled high in Vallecito. So high in fact, that the once-semi-holy site now looks more like a kitschy hoarder’s house than a place of prayer.