Algae just might be the green, slimy superhero needed to save out coral reefs

What makes amateur ichthyologists and would-be fish tank organizers cry? Is it waking up to fin rot? A case of the ick? Or what about waking up to discover that your pristine blue tank has degenerated into a green, scummy, sickly mess? Chalk that last one down to algae. Be it a greenish soup or a chunky film of pond scum, it’s everywhere in our world… but its appearance doesn’t always mean good things for the ecosystem. Or does it?

Algae has been on Earth for a long, long, time. Billions of years ago, a handful of single celled organisms had the bright idea to organize themselves together. The end result was a sort of composite life-form: a being that could ingest light and convert it into energy, and the very first step in the evolution of multicellular organisms. Since then, algae of all shapes and sizes have kept on trucking: soldiering on through eons of history, outlasting trilobites, the dinosaurs, and thousands of other species right up to the modern day. 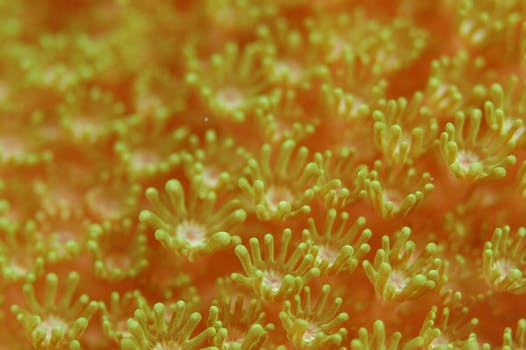 Over its successful career, algae has diversified and evolved into a riotous array of forms. Some live inside the bodies of other animals, others might grow into strange shapes and forms. One of the most remarkable species of algae evolved in tandem with one of the most spectacular natural formations in the oceanic world: the coral reef.

Coral as we know it is really a living skeleton: a collection of massive calcium deposits left behind by a symbiotic mass of tiny animals and algae. Algae species provide the ambient light and energy, while coral microorganisms slowly excrete hard shells around themselves. The end result – after hundreds of thousands of years – is a beautiful coral reef, a marine jungle home to thousands of different species.

Corals require warm temperatures and shallow seas to thrive; as continents dance their chthonic dance coral-friendly coastlines have risen and fell, submerged by subduction or pushed up onto the dry land. Corals have found ways to ride out these unfriendly periods; several species are adapted for life in the deep seas, eking out ghostly existences. Coral reefs have come and gone, but their existences surely shaped the lives of prehistoric creatures. Marine reptiles probably hunted and fed among colorful reefs in the twilight of the age of dinosaurs; before that, weird armored fish and giant trilobites swam amongst corals in the earliest days of life on Earth. But today’s corals face a threat unlike any other.

Anyone who knows anything about the environment knows that corals and their associated lifeforms are having a very rough time. Climate change warms water, while chemicals released into the atmosphere have had the side effect of literally acidifying the water; this process gradually erodes and eats away at chalky limestone skeletons.

Richard Aronson, an expert on the paleontology and ecology of marine communities and the department head of biological sciences at the Florida Institute of Technology, has emphasized the role that algae of all kinds plays in the development of harmonious, healthy reefs. Modern coral reefs have partnered with a symbiotic strain of red algae, pulling in sunlight and converting it into supplies of energy.

In the future, tending to coral reefs might evolve into a process of farming algae in the hopes of allowing coral reefs to pull through, and, eventually, rehabilitating these treasure troves of marine biodiversity.