Alex Martel started Amnesia Rockfest when he was only 17. This year, 200,000 punk fans flooded his hometown

Home » Alex Martel started Amnesia Rockfest when he was only 17. This year, 200,000 punk fans flooded his hometown

Alex Martel is living the dream. The 28-year-old native of Montebello, Quebec (population 978), founded Amnesia Rockfest, a two-day punk, metal, and alternative festival that goes down in his hometown every summer, when he was just 17 years old. It’s since ballooned into Canada’s biggest rock festival, and this year’s edition featured bands like Blink 182, Danzig, Weezer, Mötley Crüe, Alice in Chains, and Joan Jett, along with Canadian favourites like Grimskunk and the Planet Smashers.

I chatted with Martel in late July about putting together Rockfest, music, meeting Marilyn Manson, and one special volunteer: his grandma.

Q: How did you get the idea? What was the first one like?

A: I was a huge music fan growing up. I still am. At first, I was in a band. That was pretty much my goal, and Rockfest just kind of happened. We only had three bands; Grimskunk was the headliner and we had 500 people show up. So it was super small compared to how it is now, but even back then it was the biggest thing that happened to this kind of music in the area. I wanted to do something because nothing was going on in this area and I always had to go to Montreal or Ottawa or Toronto or the U.S. to see concerts or festivals. It started for fun, and it got a lot bigger over the years. I’m pretty proud of the fact that it started from scratch.

Q: As it’s grown bigger, how have you changed strategies in organizing and stuff like that?

A: Well, I had to figure out everything on my own, ‘cause when I started I had no knowledge or experience or contacts or money or anything like that. So I just went for it. Then I actually visited lots of festivals and hung out backstage and looked at how it worked. I slowly got a team around me to take care of all the details. It’s just slowly evolved since then.

A: It’s kind of beyond my wildest dreams. I always had lots of ambition and everything. At the same time, I didn’t really take it too seriously. So it kind of all happened in a natural way—evolved on its own. And seeing my small town getting taken over by thousands of rockers and punks and metal heads is just awesome. Plus, seeing all these bands playing in my hometown—almost in my backyard—many of them bands that I used to listen to when I was growing up here is definitely the biggest day for me every year.

Q: Have you always listened to punk rock and heavier stuff?

A: Yeah. When I grew up, I was really into some of the harder stuff. Bands like Tool, Marilyn Manson, Nine Inch Nails, Korn, Rob Zombie. All my friends were really into punk rock. I was into Ozfest and they were into the Warped Tour. When I started Rockfest, I kind of blended those two worlds together. I’ve always wanted diversity, and that’s something that’s important to me for Rockfest, which is pretty obvious when you look at the line-up.

Q: Have you ever gotten complaints about Rockfest from the residents of Montebello? I remember I was at Rockfest last year and the streets were covered in garbage. It was crazy.

A: Anywhere there’s a festival, there’s always going to be like five or 10 people who are going to complain about noise or whatever. I’d say that 99.9 percent of the people in Montebello are very happy with the festival and all the locals get involved. They rent spaces on their lawns for tents or for parking. All the local businesses pretty much make their year during the Rockfest weekend, so it’s really great for the local economy.

Q: What are some of the most challenging parts of putting on Rockfest?

A: It’s really a lot of work, and I have a tendency to be hands-on for pretty much everything. I guess I’m a workaholic, so I spend seven days a week working on it. I wish I had more time sometimes. That’s the biggest challenge.

Q: Do you do this full time?

A: Yeah. More than full time. You know, there’s so much adrenaline involved that even when I’m supposed to be sleeping, I’m half-awake thinking of everything. I’m pretty much used to it. I’d like to do this for as long as I can. If people keep coming and buying as much beer as they did, then I guess we’re going to be able to keep doing it for a while.

Q: During the festival, do you watch the concerts or do you stand back?

A: I try to see everything from every angle, you know? I try to see as many people as I can, and I check out bands from the side of the stage, from the crowd, from pretty much everywhere. I try to take it all in and try to enjoy the event that I spent a year working on, even though I have lots of things to take care of.

Q: What do you have to take care of?

A: Well, overseeing everything and making sure that everything’s fine if there are problems that need to be dealt with. Some years, it can be smooth, and some years, I’m going to have to do more running around. This year was actually pretty smooth, so it was a good time.

Q: I remember that last year, there was a controversy about the toilets, and this year, you said the grant from the Canadian government was a little short. How do you overcome these obstacles that you seem to run in to every year?

A: Well, that’s how it goes when you’re putting on an event this big. I guess I’m pretty headstrong and I just keep on going. It’s what I do, it’s my life, it’s what I love doing, so I usually don’t let any obstacles stop me. We’re still working on that grant that’s kind of short, so hopefully that will be resolved by the end of the summer.

Q: What do your friends and parents think about you running this giant festival?

A: They think it’s really cool. Actually, my family’s been helping me since the start by being volunteers. The first couple of years, my dad helped set up the fences and that sort of thing, and he still helps with loading gear and stuff like that. My mom’s always a volunteer at the festival, too. She used to take care of the riders for the artists. And my grandmother, too—she’s, like, in her 80s now and she’s still a volunteer at Rockfest. She’s been there since the first year. It’s really cool to see my family helping out.

Q: Awesome! What did your grandma do?

A: For the past two years she was at the press check-in, giving out credentials to journalists and that sort of thing. She’s worked at the box office and, the very first year, I think she worked at a hot dog stand that we had. It’s really cool that she’s still involved even at her age.

Q: Speaking of awesome things, you seem to have developed a friendship with Tim Armstrong. Last year, he texted you after Rockfest, and this year, Rancid played some secret shows. How did that happen?

A: We met when Rancid and Transplants played at Rockfest 2013, and we became friends. I actually just went to Disneyland with him while I was in L.A., so that was lots of fun. He was at the festival this year, too, just to hang out. He also did two secret shows: He played Rancid songs acoustically on the sidewalk two times during the event. He had the guy who did most of the Nirvana videos there the whole weekend and they filmed a mini-documentary about Tim hanging out at Rockfest. I know they set up a small studio in a room backstage, recorded 10 Tim Timebomb songs, and he recorded some stuff for his radio show. I know he interviewed Fat Mike and a few others.

Q: Do you meet every band that plays?

A: Not every band, just ‘cause there are so many bands playing at the event. One of the coolest encounters I’ve had was with Marilyn Manson last year, ‘cause I was a huge Manson fan in high school and I had never met him. I don’t usually geek out when I’m with bands, but I was kind of excited when I met Manson.

A: He was super nice and funny, pretty much as I expected him to be. His book was actually a big influence for me when I started out. His manager was there and wanted me to tell Manson that. So when I did, he seemed super happy and said he really appreciated it.

Q: The book influenced Rockfest or you in general?

A: I guess me in general, because he has his own success story. It motivated me to actually follow my dreams and do something. It’s a great book. I haven’t read it in awhile—maybe 10 years. Maybe I should pick it up again.

Q: Who are some of your other influences?

A: I spent lots of time going to a bunch of festivals. One of the early festivals I went to was Ozfest in Pennsylvania, and I thought the setting there was super nice. It was kind of on a mountain in a forest; it reminded me of the scenery here. All the European festivals, too. There are lots of people that tell us we’re kind of more like a European festival here rather than similar to the other events in North America. 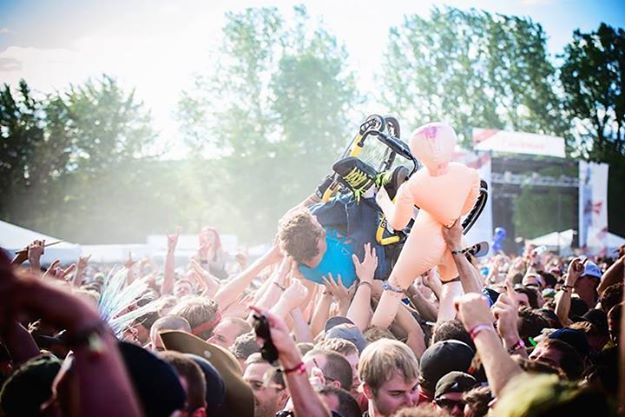 Q: How big is the team you have working around you putting on Rockfest?

A: During the festival, I’d say there are several hundred people working for us. But right now, during the calmer period, I guess it’s just me, my assistants, and a few other people. That’s it. It really depends on the time of the year.

Q: And after every Rockfest, what do you do?

A: There are lots of things that I need to settle to close the books for the year that just ended. And at the same time, it’s starting to build the foundation for next year and, by the end of the summer, it’s pretty much full-on work on the next year.

Q: Besides Rockfest, do you go to any other concerts during the year?

A: Yeah, I definitely try. I was actually just in Toronto for some meetings and I took the time to go check out my friends in Korn playing at Mayhemfest. I also checked out Nine Inch Nails two days after. I always try to see shows when I’m able to.

Q: Any hints for what we can expect for next year’s Rockfest?

A: Well, it’s going to be pretty huge again. It’s going to be our 10th anniversary edition, so we want to make it special, and I guess that’s all I’m going to give away for now.

A: Well, I guess I can say thanks to everyone for supporting the event, and making it become the largest rock festival in Canada. I really appreciate it. I’m still a music fan so, you know, I think it’s really cool. And I hope to see everyone next year.