Krokodil will literally eat you from the inside out. This poor man’s heroin, an opiate derivative of codeine, is ravaging the lower class in Russia because a) it’s dirt-cheap and b) it can be made completely from supplies found at your local pharmacy.

While there has been a recent media frenzy in covering this drug’s impact overseas in North America, Dr. Andrew Kolodny phrases it best in an interview with the Daily Beast: “(North America doesn’t) have a Krokodil epidemic, we have a heroin and painkiller epidemic,” says Dr. Kolodny, chief medical officer at Phoenix House, a non-profit alcohol and drug rehab centre.

A Vice documentary sent a team to the small Siberian town of Novokuznetsk to take a look at Krokodil’s effects in Eastern Europe where it is estimated that 20 per cent of the population is addicted to heroin. As the narrator of the documentary said, “Nowhere are Russia’s drug problems more evident than here.” The camera follows a few different young adults around the city and in to the slums where Krokodil activity is most problematic. While some heroin addicts gravitate to the drug because of its affordability factor, others stay far away.

“Of course heroin is also bad,” says one young addict. “But Krokodil is simply terrifying.”

On the surface, the appeal of Krokodil makes sense. The mix is cheap, and extremely accessible. But because the drug is so extremely addictive, addicts deteriorate rapidly.

The drug, although it can be customized away from this original formula, is a toxic cocktail of codeine combined with easily-available chemicals, including iodine, strong alkalies, hydrochloric acid, red phosphorous from matches, paint thinner, industrial cleaning oil, and alcohol. In Russia the adding of eye drops in this injectable concoction is also very popular because, apparently, it enhances the high.

Pictures of rotting flesh and exposed bones have surfaced into mainstream media, and you can thank Krokodil for that. The drug infects the area around the injection site and leaves dark, scaly, and reptilian like marks on the user’s skin. This is essentially the skin rotting, and users have reported their skin falling off in chunks. Heavy users are expected to have a 1-2 year life expectancy, but die a very painful, slow death. 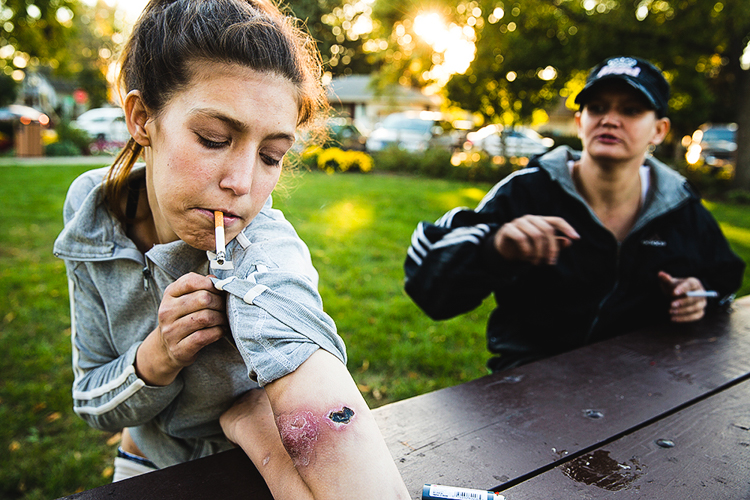 Krokodil is reported to be around eight to ten times more powerful than morphine and notoriously fast-acting. According to the New York State Office of Alcoholism and Substance Abuse Services approximately one million people in Russia are abusers of Krokodil, and the amount of Krokodil seized in Russia increased 23-fold between 2009 and 2011, according to the head of the Russian Federal Drug Control Service.

According to this article, “a user’s attention is narrowed to the process of acquiring and preparing and administering the drug, leaving little time for matters other than avoiding withdrawal and chasing (the) high.” This sedative and analgesic-like effect creates the zombie-like attitude of repetitively chasing after one goal, despite the consequences.

Taking Krokodil is a death wish. You may not die immediately, but with long-term usage the severely addictive qualities and frankly, nuts, ingredients will ensure that last year (and a half if you’re lucky) of your life is lived in extreme disgust and agony.