How the Aboriginal Drunk Beggar I Met Barhopping Changed Me

Home » How the Aboriginal Drunk Beggar I Met Barhopping Changed Me

I’d been barhopping that night in downtown Toronto with three other people, and we were trekking to the bus stop around 2 a.m. I’m not sure why, but whenever I’ve been drinking, I feel the need to be nicer; maybe it’s an attempt to soothe my conscience after abusing my liver. That’s why, when a random guy in a dark blue hoodie asked if I could spare some cash, I didn’t ignore him like normal city dwellers are prone to do.

“Sorry dude,” I replied. “I only have some change, but you can have that if you want.”

“Change is my middle name, yo,” he said. He was clearly drunk but looked pretty steady on his feet; the thing that really gave him away was the slight slur in his speech.

After my boyfriend at the time and I gave him a couple of quarters and dimes, he asked us if we knew the way to a certain intersection. He needed to get to a shelter there because all the ones nearby wouldn’t let him in while he was drunk. I told him we were heading in roughly the same direction and that he could walk with us. Normally, that would be an intensely stupid thing to do in downtown Toronto that early in the morning, but this guy looked all right—clean-shaven, relatively hygienic, soft-spoken.

Along the way, we started talking.

His name was Kennet Rich.

Kennet was 22. He’s originally from Kenora, a city in northern Ontario almost touching the Manitoba border. If you were to drive there, it’d be about a 22-hour ride from Toronto, assuming you don’t stop at all for gas, food, or a bathroom break. Until about six months before we met, Kennet lived on an Ojibway reserve up there. He left because there was nothing to do, he told me; there was no hope for a future.

Kennet has two kids: Atrix, then three years old, and Tetrix, who was just one. They live in Montreal and Ottawa with their respective mothers. Kennet said a couple of times that he calls them every day. He tries to visit but it’s too expensive to see either of them very often; he’s had a couple of odd jobs since coming to Toronto but nothing steady. The last time he saw Atrix, he bought her a Happy Meal from McDonald’s with whatever cash he had left because he knew it would make her smile.

He told me they both knew their daddy was a drunk.

The only other mention he made of family was his older brother. He died four years ago after being hit by a car.

I noticed a stain down the front of Kennet’s hoodie and asked him if he had thrown up earlier.

“About two or three times tonight,” he said.

He told me how it’s really easy to boost 26s from LCBOs and Beer Stores if he doesn’t have the money to pay for them. He does it a lot and shares the spoils with people he’s met out on the streets. He drinks until he blacks out. He’s been drinking every day since he came to Toronto, and probably before then, too.

“I don’t eat, yo. I don’t buy food. I only need alcohol. That’s the only thing that matters.”

“Have you ever tried to stop drinking?”

“It’s hard, yo. Alcohol is my life. It cures everything, it makes me feel better.”

He said he thinks about killing himself a lot.

Kennet had an old-school flip phone. I gave him my number and told him to call or text me when he reached the shelter. To be honest, I wasn’t expecting anything to come of it, but it just felt like the right thing to do. It was just like how you get a friend who’s heading out alone to call you once she gets home safe.

We got to a spot he recognized and he said he was crossing the street. I told him we were going to keep walking so we could catch our bus.

“I knew you would do this to me, yo. I always end up alone. But you guys are good people. Thanks for the company,” Kennet said before he dashed across the street— narrowly avoiding a passing pickup truck. For a second, I couldn’t help but think about how he said his older brother had been killed.

My group kept on walking. 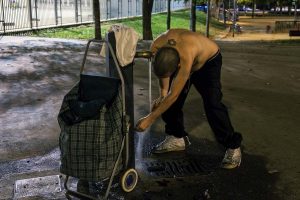 My boyfriend at the time—rightfully confused and mildly alarmed— asked me what was wrong.

Have you ever been in a situation that, even though it felt so unfair, there was nothing you could do about it?

Kennet was with me for maybe an hour, but it’s crushing to see someone’s future look so bleak. Maybe I’m too sensitive. Maybe I get emotionally attached too easily.

Deep down, I knew the odds were heavily stacked against Kennet. He is a walking stereotype: young, chronically drunk, and Aboriginal.

And while it’s important to note that obviously not all indigenous peoples in Canada follow the same path as Kennet, it’s also impossible to examine Aboriginal society without seeing the dark side that’s the result of centuries of colonization and being treated as second-class citizens, if not worse.

What you won’t find in any glossy Canadian tourism or immigration brochure is our history of residential schools, where Aboriginal children were taken away from their families, forbidden to speak their native tongues or practice their cultures and forced to assimilate into a Canadian-European-Christian culture. Over 150,000 children went through the system, which at times saw a mortality rate of 30 to 60 percent within five years, starting in 1857—the last one didn’t close until 1996.

You can probably imagine how being ripped away from your family, never to see them again, being told everything you know is wrong and bad, and being abused on a regular basis can fuck you up. And it’s also not too hard to imagine how erasing languages and traditions had a devastating impact on culture, sense of worth, and the development of future generations.

Suicide is the leading cause of death for First Nations youth and adults in Canada. Canadian Aboriginal males commit suicide five times more than any other group. The suicide rate for Inuit youth is 11 times the national average. Canadian Aboriginal women are murdered or go missing at such an alarming rate that Amnesty International calls it “nothing less than a national human rights crisis,” with one of the latest cases being a 15-year-old whose body was found in a bag in the Red River.

But for all the problems of larger magnification, there are also personal issues to tackle. I was pissed at Kennet for fucking himself up with booze and for not stepping up for his kids. The system holds an enormous responsibility, but so does every individual, too.

Meeting and talking to Kennet helped shatter the little bubble I’d been trapped in. Here’s a guy not much older than me who doesn’t have a home to go back to, whose big brother was killed, who has two kids and is an alcoholic.

I can afford to go to school. I have a bed to sleep in every night. I never have to worry about when my next meal will be. I have my friends and family around me. I live a privileged life.

I hope Kennet beats the odds. I want him to be okay.

I got a text from a number I didn’t recognize at 4:04 a.m. later that morning. It was three words long.

I lost my phone a month later. I haven’t run into Kennet since.