North America’s known for its extreme consumer culture. You step outside your front door and are immediately bombarded with thousands of billboards and advertisements. From all you can eat buffets to limitless credit cards, there is this communal and unsatisfiable desire to break boundaries and test limits.

I am the perfect example of this excessive lifestyle.

My closet is currently overflowing, yet when I walk past a sale at my favourite clothing store, I can’t help but further fuel my addiction. I’m constantly wondering what can be added to my current experience to make it even better and once you’ve been hooked on this gluttonous habit, it’s hard to cut yourself off, but there are people who have turned away from this materialistic culture by choosing to be rich in experiences, rather than in dollars.

Instead of preoccupying themselves with superfluous things like fashion trends and gadgets, they are looking way beyond their phone screens by actually seeing the world. Time is their currency and they are not wasting a minute of it. The question is, what’s stopping all of us from doing the same thing? Here are four stories that will inspire you to stop saving up for a new computer and to save up for a plane ticket instead.

After being signed onto the Toronto Blue Jays last year with a $2 million bonus, Daniel Norris decided that a life filled with excess frivolities was not for him and instead, he spends his time, “traveling around the coast in search of good surf, epic hiking spots and rock walls.”

Norris lives inside his classic 1978 Volkswagen Westfalia camper van, also known as “Shaggy”, which is equipped with a single bed and kitchenette. While Shaggy may not be a popular housing choice amongst the public, Norris is completely satisfied with his simplistic lifestyle.

His father owning a mountain bike shop helped him foster a love for nature at a very young age. Whether he was mountain biking, camping, or hiking, he loved being outdoors and active. This did not fade away over the years. The young baseball player even has natural substitutes for the conventional cross-training other athletes do.

“Surfing is great for your shoulders and core, hiking is a good lower body workout, and rock climbing … well, if you’ve ever rock climbed, good luck getting out of bed the next day!” he said to GrindTV.

Norris has been embracing this off-grid lifestyle for three years now, and it doesn’t look like he’ll be turning back any time soon.

Daniel Suelo, better known as the guy who quit money, left his lifesavings-all thirty dollars of it-in a phone booth back in 2000 and now lives in complete solidarity in a cave in Utah where he survives off the wild.

This form of lifestyle is a little more off-grid than most adventure-seekers hope for, but what Suelo succeeded in teaching the public is the artificiality of money and how we are tricked to believe it’s a dire necessity.

“Money exists if two or more people believe it exists,” said Suelo in an interview. “When I left home for college, I found that all the world’s major religions teach giving up possessions and doing not for the sake of reward. If all the separated witnesses are saying the same thing, it must be true. What would happen if we actually practiced this stuff. My dad also took us camping a lot, and I was a nature freak. I couldn’t help but see how perfectly balanced nature was, and it ran on no money. Why couldn’t we?”

Suelo suffered from depression and hoped that living in unobstructed isolation would naturally heal his mental illness along with aiding him in reaching a state of spiritual authenticity.

“[The] most important [thing] that I’ve learned [is] our true nature lives moneyless, giving freely and receiving freely. Even the most staid CEO is human underneath,” said Suelo. “By cultivating this nature in myself, I can see it in others, and it can be cultivated in others.”

He went from living the “ultimate Dubai lifestyle” with his 12th floor apartment, high paying corporate job, and expensive car, to living off-grid in a small shack in the middle of a Spanish desert eco-village and has never been happier.

After taking a year-off from his corporate job to backpack in South-America, his life took an unexpected turn due to his unquenchable wanderlust. He decided to leave behind his business life and travel the world with nothing holding him back.

He bounced from country to country until he discovered his passion for green living and environmentalism. He was then determined to find the perfect place to utilize it, which was how he came across Sunseed, the low-tech and low-environmental-impact community in the southern Andalusia region of Spain.

The closest town is a 90 minute walk away from this little eco-friendly bubble and it gives the residents a deeper sense of freedom. He now happily spends everyday appreciating the beauty and simplicity of nature while learning about green energy and low impact living without the constricting choke hold of his suit and tie.

This couple hitchhiked from Bulgaria to India completely phone-less 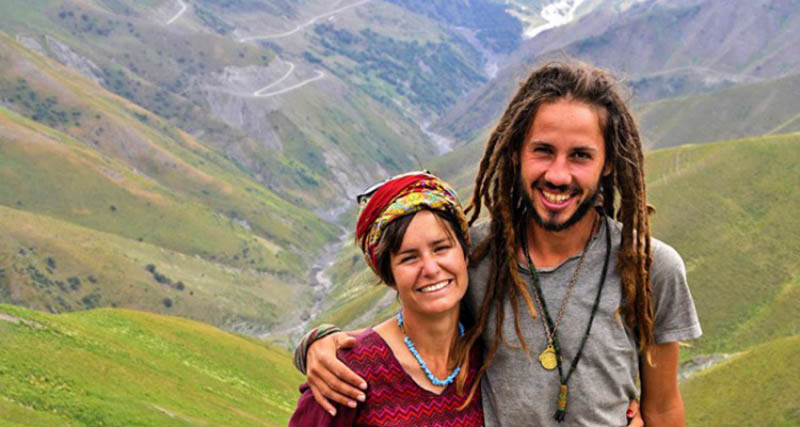 Crinkled and tearing maps turned into state of the art GPS systems and admiring a beautiful view is now unofficial without documenting it on your smartphone. Traveling used to be about adventure and getting back in touch with nature, but now, more and more, the experiences are being tarnished by the constant presence of technology. What happened to seeing where the road will lead you or bringing back nothing but memories? One couple decided to go back to these adventurous roots by hitchhiking from Bulgaria to India bravely without their smartphones, tablets, or GPS.

Marta Martinez Samalea and Boris Kanev left Bulgaria one rainy afternoon in October 2013 and spent the next 511 days travelling from country to country with nothing but two backpacks and their stray tag along Burma, a newborn cat whom they found on the streets during their travels.

The couple refused to set foot on an airplane and made hitchhiking their primary form of travel, which meant putting their trust in complete strangers. While it may open doors to dangerous encounters, it also opens up the possibility of forming lifelong friendships and travel companions.

“We really enjoy the simplicity of hitchhiking, walking, hiking,” said Samalea to the Daily Mail. “An overland travel is a wonderful chance to see that the earth is one, and how landscapes are shaped by cultures, coloured by the peculiarities of the inhabitants across each border.”

Of course, travelling for 511 days without any setbacks is unimaginable. The couple had to cope with a few roadblocks throughout their journey, such as Kanev’s backpack being stolen, their encounters with vicious dogs, and Kanev’s trip to the hospital after developing gallstones. What these setbacks did more than anything was make them further appreciate the small blessings they encountered as well, for example occasional access to Skype to contact family and friends and their volunteering opportunities.

The happy couple is still in India where they are continuing their journeys along with writing an e-book filled with their best adventure stories. The experience of travelling without the distraction of a smartphone is highly recommended because you’re able to “spend more time looking out of the window than into a screen. There is a certain joy in disconnection, in spending days in nature without ringtones or the chance to check Facebook,” said Kanev in a Hindustan Times article. “You just live your days fully in the place where you are without the temptation of continuously browsing out of habit rather than need.”

One thing that all these people share is their high state of spiritual wealth. They all have a deep understanding of what’s actually important in life and what’s easily replaceable.

It’s easy to get caught up in this financially burdening social trend where name brands have become as accessible as native languages, but we mustn’t allow these frivolities to tarnish our idea of what true happiness is. Many people believe the absence of money equates to the absence of happiness, and that concept couldn’t be more wrong. Their is so much more to life than owning mansions and driving expensive cars. Once the blinding smokescreens fade, I think we will all eventually come to the realization that we don’t need an abundance of possessions to feel complete. Fall in love, start a family, travel the world – whatever your heart desires. Do whatever it takes to be happy because at the end of the day, you’re going to want to be remembering your most cherished memories, not what you were wearing when you were making them.