30% of food in the USA goes to waste – Fill stomachs, not landfills

Home » 30% of food in the USA goes to waste – Fill stomachs, not landfills

I used to know a girl who would occasionally go dumpster diving for the mass quantities of bread and baked goods that get thrown away behind supermarkets, bakeries and restaurants. Sometimes, when she was in the dumpster, the store owners would come storming out of the back door with shaking fists, insisting she drop the food and leave immediately.

I understood where these storeowners were coming from. They wanted people to spend money in their store, rather than rummage through the dumpster for freebies. But still, it was hard to believe that people would rather throw food away than see it put to good use.

According to the Natural Resources Defense Council more than 30% of food in the USA goes to waste, equating to $165 billion dollars in unused food. This is enough money to feed approximately 79 million people, based on information provided by the United States Department of Agriculture.

However, according to feedingamerica.org, nearly 53 million people in the United States currently struggle with hunger.

Despite having more than enough to go around, the U.S. still has more hungry people, than Canada has citizens. Why does all this food get thrown away?

Most places throw their food away in order to retain their customer base of picky consumers. The strange thing though, is that companies would rather feed landfills than empty stomachs.

Starbucks locations, for example, throw away bags and bags of food each week because they’ve surpassed the company’s specified “freshness standard”— of course this standard is well before the rest of the world would consider it expired. Unfortunately Starbucks employees aren’t able to take this food home or distribute it to those in need without facing the axe. 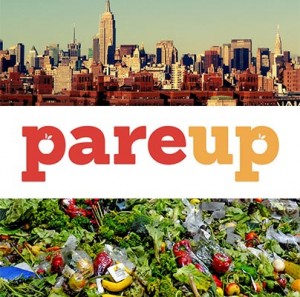 Luckily, a New York City native has recently created an application called Pare Up, which allows food retailers to save this food from going to waste, while simultaneously saving consumers’ shrinking bank balances. Quite simply, it allows grocery stores, restaurants and bakeries to list there soon to be discarded food, allowing consumers to buy it for pennies on the dollar.

However, this soon-to-be-launched application—though troublingly obvious in retrospect—will only be accessible in New York City, at least to begin with.

Aside from grocery stores, restaurants produce a significant amount of our annual food waste. A Chicago sandwich shop, Sandwich Me In, has earned a loyal customer base by debunking the “necessity” of restaurant waste. With the help of renewable energy, locally grown food, composting and recycling practices, it took over two years for Sandwich Me In to produce eight gallons of garbage—what most restaurants produce in an hour. The owner, Justin Vrany, then sold this garbage to a local artist who used it to make sculptures, officially making the restaurant a zero waste establishment.

These low or zero waste restaurants are starting to gain attention. A non-profit restaurant in Denmark, named Rub og Stub, makes its meals from discarded grocery store food which is nearing expiration. Interestingly, despite the potential for a high profit margin—getting most of their materials from donations—the restaurant is run entirely by volunteers, and the proceeds are given to humanitarian development projects.

It’s funny; 20-30 years ago serving up garbage as food would have surely been a social acceptance death warrant. Today, in the surge of the green-movement, food entrepreneurs are realizing that the definition of waste is entirely subjective; one man’s trash is another man’s treasure.