One of Google’s newest recruits, 23-year-old Brandon S. was left scratching his head after being drafted from the East Coast to work at the San Francisco office: at an average of $2,000/month for rent alone, how does any normal person—let alone an employee of a tech giant—afford to live here?

It’s a question that not only applies to the Bay area, but has rather driven a mass exodus of fed-up Americans away from the ball-and-chain of a mortgage, and towards the infinitely more realistic option of tiny homes and outfitted camper-vans—or in Brandon’s case, a 128-square foot cube truck in the parking lot of Google’s Mountain View headquarters.

When Brandon S. went out west to work for Google he made the choice to avoid high rent and made this cube truck his home. 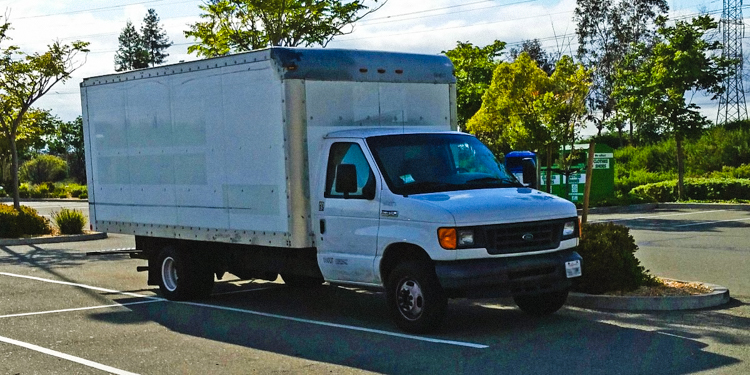 Using the corporate gym for showers and a bicycle to run errands, Brandon runs a blog out of his 2006, Ford Cargo Van home, detailing life inside the cube and the enormous savings it affords him. As Business Insider notes, this living situation allows Brandon to comfortably tuck away 90% of his income.

He uses the corporate gym for showers and bicycles to run errands.

The concept of micro-living in San Francisco was a year in the making for Brandon. Last summer he began a year-long internship at Google, living out of the company’s corporate housing, which amounted to $2,000 in rent a month for a two bedroom apartment that housed four staff members. It’s an outrageous bill to foot for anyone, and especially for Brandon who found himself only returning to the apartment to sleep at night. “It’s really hard to justify throwing that kind of money away. You’re essentially burning it—you’re not putting equity in anything and you’re not building it up for a future—and that was really hard for me to reconcile,” Brandon told Business Insider.

Brandon’s blog gives a glimpse into the van lifestyle and the enormous amount of money he saves.

Knowing that his career demanded he set roots in San Francisco, Brandon spent a year saving and preparing for a more economical living situation. He settled on a Ford E350 Super Duty Cargo Van with 157,000 miles and a price tag of $10,000. It’s a lot of money to drop all at once, but he knew that it would take less than five months to break even and justify with an incredible stream of savings. Today, on October 21st, Brandon officially broke even on his investment. Though it is still not entirely free to live in— coming with the monthly insurance cost of $121—on his blog he explains that his alternative would be a Mountain View area studio, which you would be hard pressed to secure for anything under $2,100 a month. Brandon is now yielding approximately $2,000 every month in savings.

He officially broke even today on his investment and saves roughly $2,000 every month.

Brandon doesn’t know how long he intends on staying in the cube van, but mentions on his blog that it’s the perfect time to experiment with alternative living situations—“I’m young, flexible, and I don’t have to worry about this decision affecting anyone else in my life.” Evidently the experiment is going extremely well—after five months, Brandon foresee’s a long, profitable future in the comfort of his van, in the shadow of Google’s Mountain View headquarters.