13 essential on-the-road philosophies for the broke, but passionate, shoestring traveller

A year of cooking my retinas on the white glare of my laptop and a never-ending rotation of office-work had turned my life into a dried and packaged version of itself. It was now August and the lack of movement made my feet itch. My bank account didn’t support a trip, but fuck it—it was jump now or lose my opportunity to the encroaching dread of winter in the mid-west.

It is the nature of the brain to generate and preserve neural pathways when we learn, or to deteriorate based on a lack of mental exercise. But this use-it-or-lose-it function of the brain is also true of our spirit—if you don’t take it out for a walk every once and a while, you may find yourself having increasing urges to play shuffleboard, migrate to Fort Lauderdale and spend your Saturday evenings at the bingo-hall. Terrified by the thought of Werther’s hard-candy and musky-cologne, I immediately hopped online to search for rental cars.

1. It is the job of a road-trip to de-stick us from the mundane, re-align our perspective and strengthen the foundation of our identity.

2. The danger of routine is that your days become the bricks of a singular memory in your mind. On the road, every day is a house of its own. The highway becomes the timeline of your history as the passing countryside fossilizes in your memory, giving landscape to your life. 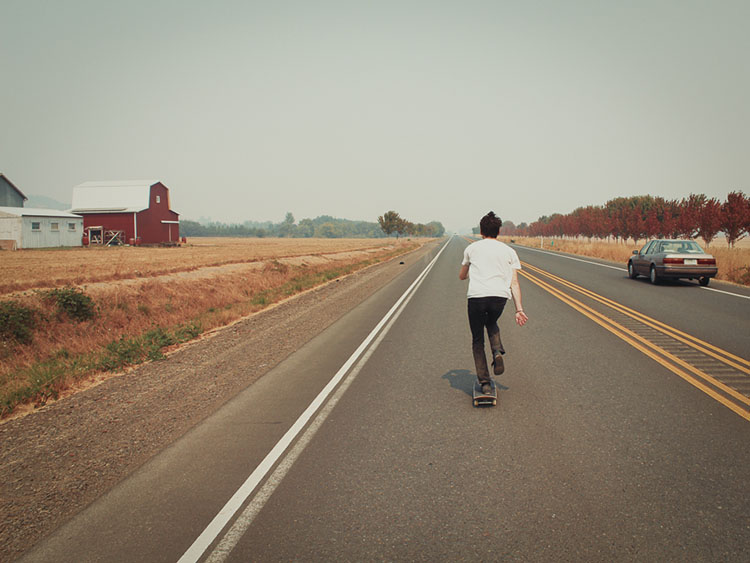 Driving into Oregon, the smell of burning wood suffocated the valley and the green range of Sasquatch country huddled behind a blanket of smoke that floated south from Washington’s burning core.

3. The road is precarious. Every moment is a step in the direction of something utterly new and blissfully temporary.

We woke up on the Oregon coast in a pile of empty beer cans and rotting groceries with a headache from the booze and stiff necks from spending the night in a seated position. If you absolutely have to sleep in a car, the trick is to get impossibly high then drink until you wake up wondering what the fuck happened.

Though we had intended to camp on the beach, a well-mannered redneck had informed us the night before that cops in this town were ticket-happy this time of year. Building a fire was also out of the question. But as we patrolled the strip for an overnight parking spot, three uninhabited fire-pits materialized out of the dark already blazing. They belonged to the nearby hotel—gas powered to burn all night, but no guests around to enjoy them. We weren’t guests, but we would be sleeping in their parking lot tonight. Close enough.

4. The beauty of a destination is shaped by the struggle of the journey. 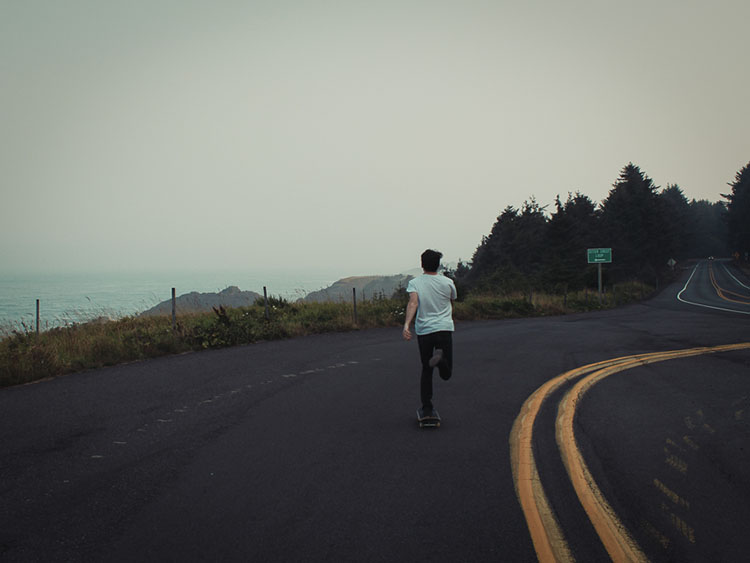 Some days, the road blesses you with three perfect fire pits. Other nights, you go to buy dinner only to find your bank account is empty, phone has no service and credit-card frozen. In the moment, the chances of shrugging off bad-luck as “character-building” is slim, but it’s the price you pay for a good story.

5. Too much good luck makes your life doughy and boring. 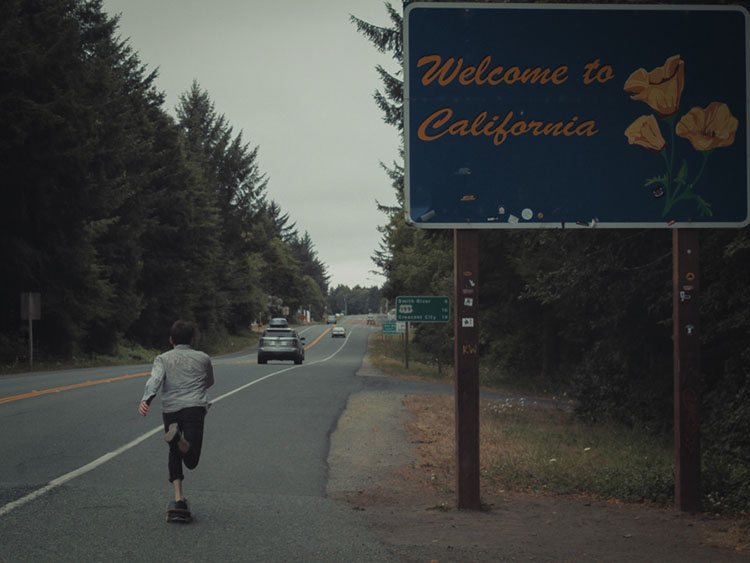 We carved a path through the fog looking for a place to pitch a tent in the shrinking light. The permit desk was closed. Perfect. We proceeded into the campground. By 10:00 pm we found an empty camp site and prayed no one would come shining a light into our tents in the middle of the night.

6. If we remain static for too long, we can lose the ability see outside the tunnel of our own perspective. This is a dangerous vantage point. Sometimes, it takes something extraordinary to show us that we are not. 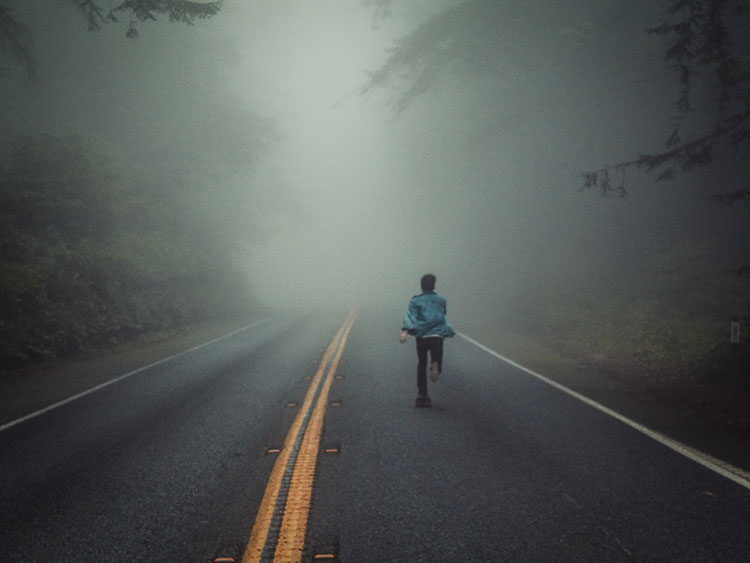 Earth-red giants emerged from the spiral of green underbrush, moss dripping from the towering branches like liquid gold. Few things in life are as humbling as the pacific redwood. Bring to the woods your greatest distress and most cherished artifacts and watch as they’re rendered useless by pathless woods, the unceasing streams and eternal wooden architecture. And yet, even nature isn’t free from the burden of self-destruction. The tragedy of a redwood’s death outlasts that of a human’s by nearly 1,000 years. But those with the right foundation will remain standing long after the flames die out, the tall black trunks proudly displayed for the hiker’s meagre comparisons of woes and accomplishments.

7. The benefit of turmoil on the road is that we are forced to move forward in spite of it all. If your car breaks down, hitchhike. If you run out of money, busk. If you need a warm shower, make a friend and hope they invite you in. 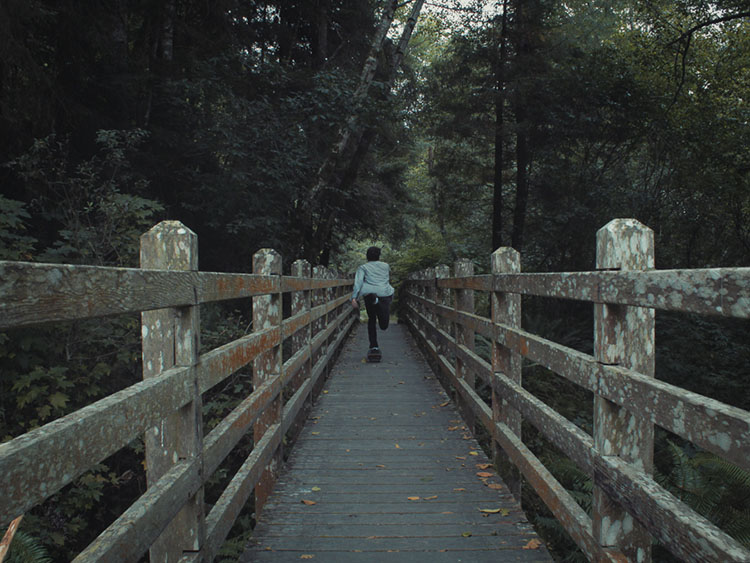 8. The road is an incubator for ingenuity and resourcefulness. 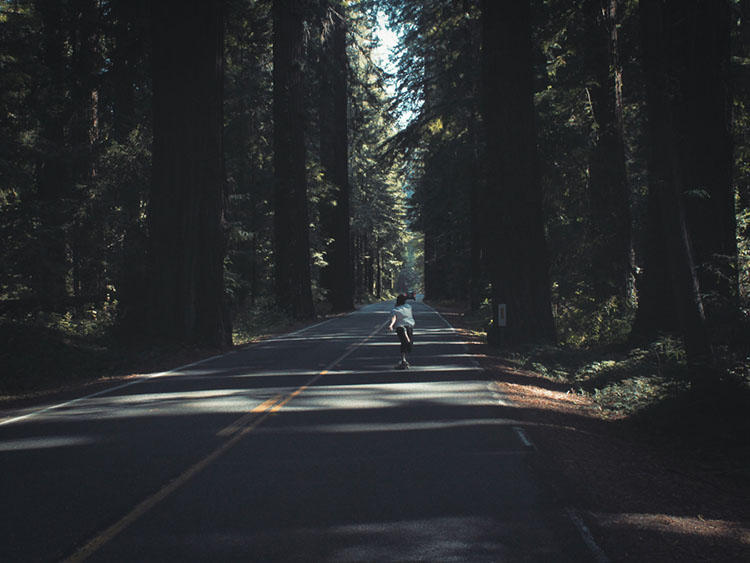 “Eight fucking dollars?”
“Yes, sir, eight dollars and sixty-five cents.”
“And my credit card?”
“Well sir, your credit card is frozen due to an outstanding balance.”

“Twelve Dollars!? You froze my account over twelve dollars?”

This was the news I received from my bank at the bar of a dimly lit Mexican restaurant, using their phone because mine couldn’t get service in the U.S.

We watched our gas gauge approach empty as we rolled into Yosemite and up to the Tenaya Lake trailhead. Money or no money, we packed our bags with enough gear to last us the next two and a half days in the woods on a 35 mile loop that would lead us into the High Sierras and up to Tuolumne Meadows.

9. The road has a funny way of showing you exactly what you need to see. If you’re an arrogant little asshole, it will take away your car, your money, your pride and leave you on the side of the road with a dead phone and an empty highway. If you’ve lost yourself in the shit-storm sea of life, the highway will part the tide like the Red Sea. 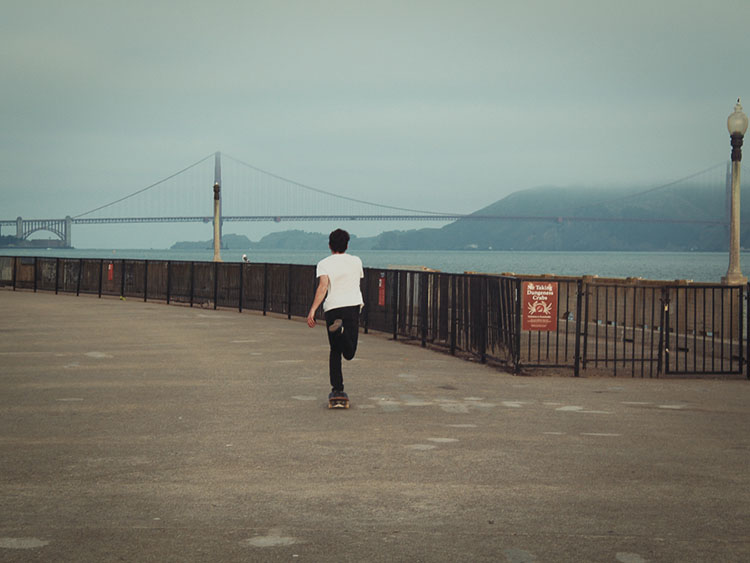 We spent the next two days ascending the ankle-crushing landscape between Tenaya Lake and Vogelsang base camp where we would pitch our tents in the windy valley between the mountains under the approaching cover of night.

The need for water to boil our shitty oatmeal dinner led us into the paid-for campgrounds, where the wealthy and old sought refuge in cabins and ate their meals in the staff-run kitchen, where we would attempt to resource water. Two young staff members cracked open the door to the kitchen. “Come in, boys. Fuck water, want some tequila?” A congregation of 20-somethings passed around ladles of tequila, hash, long joints and plates full of portobello mushrooms, steak, vegetarian sandwiches and chicken breasts. “A bit better than huddling around a pot of oatmeal, eh boys?” One of the staff members turned on a revolving colour-shift strobe light. That day, we had hiked 10 miles straight up the knee-shattering mountain incline between Merced Lake and Vogelsang, and that night we would drink tequila, smoke weed and dance until the early hours of the morning.

10. The road steals your ego to replace it with confidence. 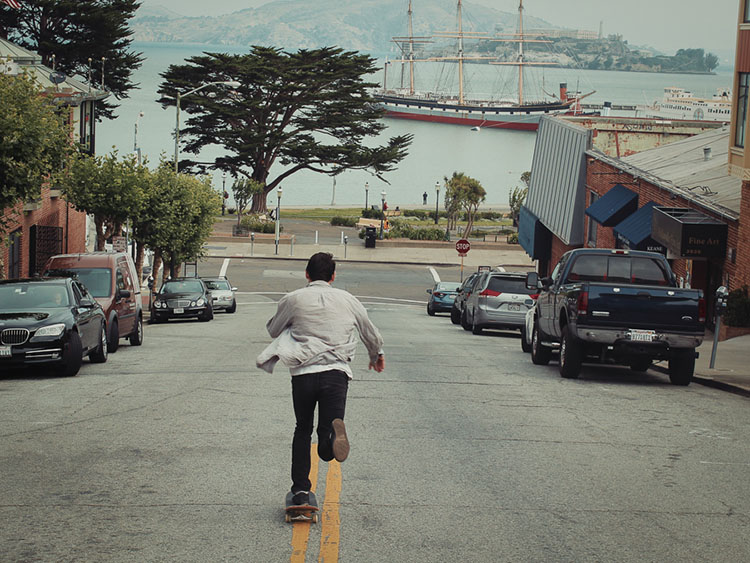 11. On the road all of life’s dizzying highs and oppressive lows are are neatly packaged in 24-hour frames. 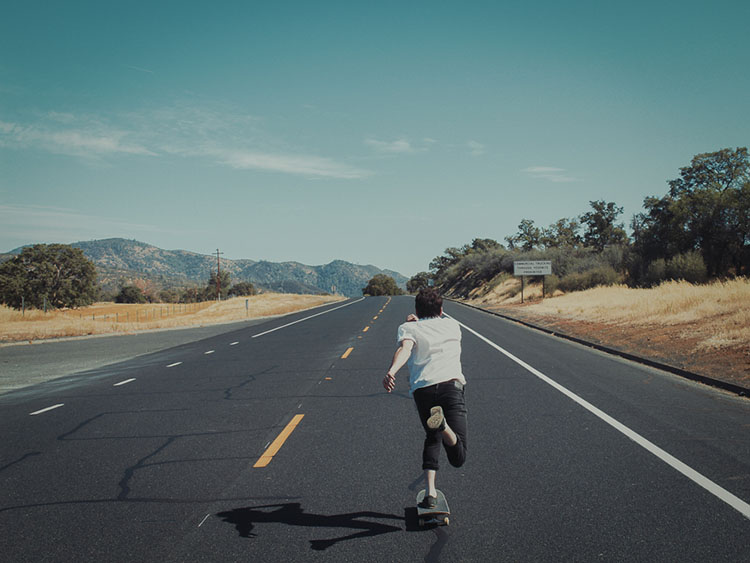 12. For at least a few weeks, your concerns are entirely non-commercial and your intentions are aimed only at experience. 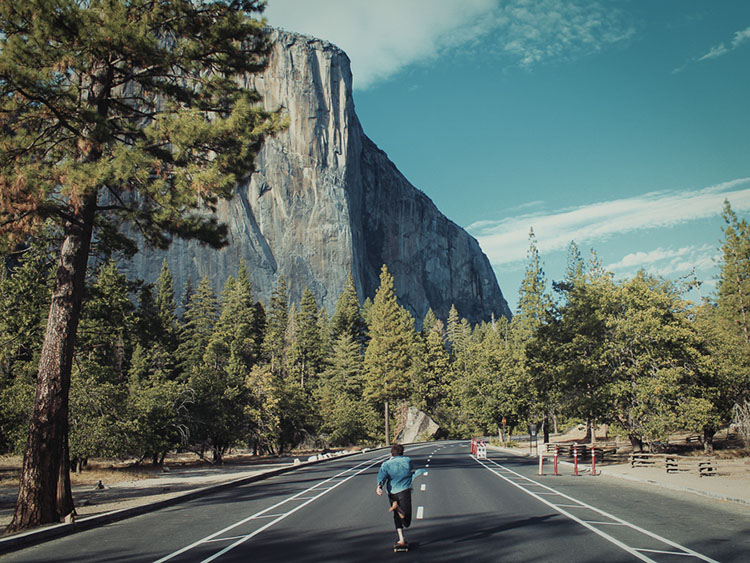 We hiked out of the forest and spread our remaining cash out on the hood. Just enough gas-money to make it to LA, not quite enough to eat.

Driving from Seattle to Los Angeles we didn’t sleep in hotels, or even motels. We couldn’t afford hot showers, and bathed almost exclusively in the ocean. We didn’t eat five-star cuisine that reflected the specialty of the region we were in. We didn’t drink coffee in the mornings and our most expensive drinks were Budweiser. But my lack of money didn’t make the hills of Oregon any less green or California’s redwoods less prominent or the ocean less powerful or the 10,000 foot view over the mountain-guarded valleys of the Sierra Nevada any less spectacular.

13. When circumstance persuades us into uncertainty, we become a statue in our own lives. But you do not need a map to drive, or a destination to disengage the paralysis of doubt. You only need the willpower to take the first step and the courage to take your second.