Trolling Trump: The Art and Satire of the 2016 Campaign Vol. 1

A giant turd has marked the streets of Manhattan and taken the country by storm, with a blond comb-over and a face with the familiar squinty-eyed pout. Though that turd is not the Donald, it’s certainly made in his image and carries on the great American pastime of political satire that has a long and fabled history in the state of New York.

Considered by many to be the father of the American political cartoon, Thomas Nast is responsible for the Democrat donkey and Republican elephant and was even thought to have helped Abraham Lincoln win the presidency. His cartoons for Harper’s Weekly were some of the most effective satirical weapons in American politics and established a long tradition of jokes made mercilessly at the expense of the powerful.

In the late 1800s his caricatures of New York City’s mayor William Magear “Boss” Tweed exposed the corruption at Tammany Hall by skewering it for thousands of voters. Nast’s cartoons often featured Boss Tweed as a crook. One portrayed the mayor as a Roman Emperor raiding the city’s treasury with the caption, “What are you looking at? To the victor belong the spoils.” The cartoons were so influential that they prompted the mayor to demand Harper’s stop printing them.

“I don’t care a straw for your newspaper articles,” Tweed wrote, “my constituents don’t know how to read, but they can’t help seeing them damned pictures.”

With the 2016 campaign offering no shortage of comedy fodder, artists and satirists are continuing Nast’s legacy.

Shortly after Donald Trump announced his candidacy in the summer of 2015, the streets of New York were graced with campaign posters showing the billionaire entertainer wearing a sombrero and saying, “You’re hired!” Later that summer on Manhattan’s Lower East Side, a mural appeared on Orchard Street depicting Donald Trump as a giant turd. 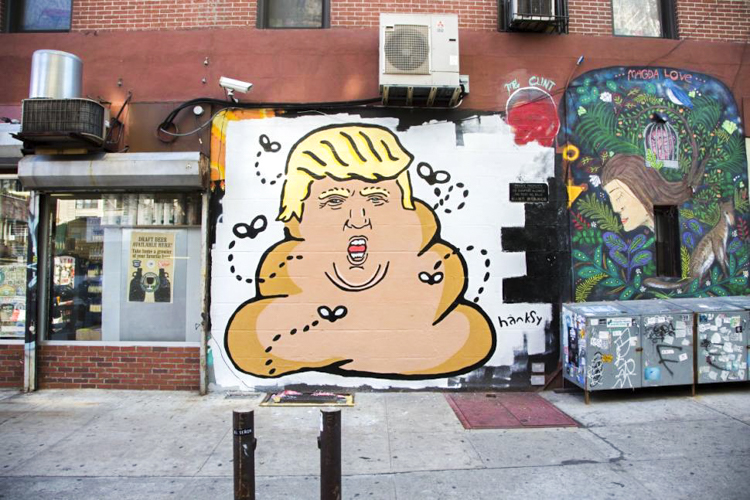 Both were the work of New York artist Tom Hanksy, whose name is a mashup of street artist Banksy and the main feature in many of his satirical murals: Tom Hanks.

“These are dark times,” Hanksy says, but his art (or Fart as he sometimes refers to it) is a rallying call for those who choose not to take life too seriously. “Traditionally, my work has always been for the LOLs. Nothing really beyond that,” he says. “My work was designed to make people laugh and smile. Change someone’s day, turn that frown upside down.”

Hanksy is one of many artists battling Trump with a comedic tone and trolling the billionaire on the campaign trail, maintaining, “You’ll never change anyone’s opinion by screaming in their face. Simply put, you can’t fight anger with anger. It’s not productive or healthy.”

But Hanksy understands that both he and Trump have had to master the rapid-fire pace of social media in order to build their following within a culture of soundbites.

“Yes, it’s a silly cartoon doodle, but it’s an image that can be seen and interpreted in less than five seconds. Which is what you need with today’s hyper transitory attention spans.” Hanksy says of the Trump Turd which is available for download online. “Giving it away for free will do more good in the long run than the few hundred bucks I’d make by copywriting it.”

His work has taken on a life of its own, spreading across the continent and spawning everything from T-shirts to a mobile video game called Trump Dump in which the player guides a bird through a series of walls so that it can dump on Trump and turn him into a turd resembling the Orchard Street mural. 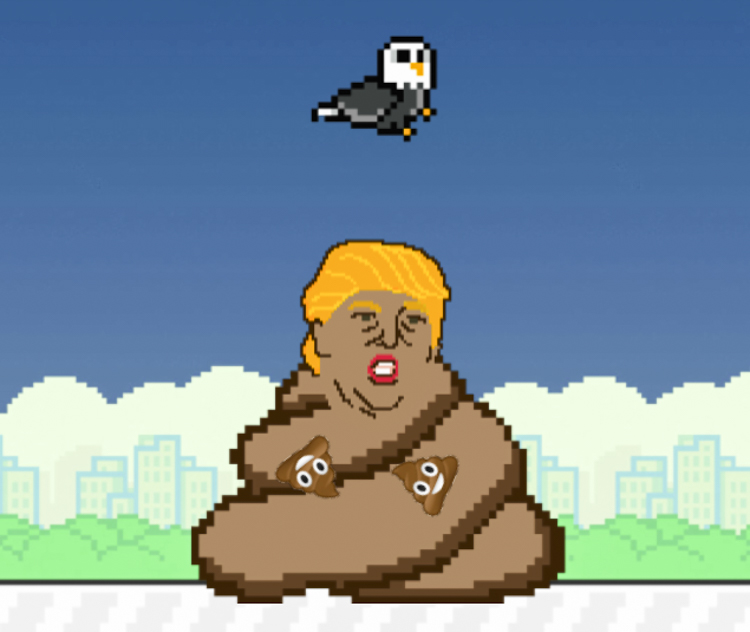 “It’s been interesting. Never has my work taken off quite like this before.” Hanksy says, “I’ve seen countless bootleg T-shirts pop up all over the nation. Down in Mexico. Everywhere. It’s crazy.”

According to Mashable Trump Dump rose to the number two spot on iTunes a week after its release.

“I do realize that when life gives you an opportunity, you take it,” Hanksy replied when asked if he believes that artists should be activists. “I didn’t choose the dump life, the dump life chose me.”

Despite having the home town advantage, or perhaps because New Yorkers know him best, Donald Trump has played the muse to artists across the city who have marked the streets in protest. Shortly after Hanksy’s turd appeared in Manhattan the words, “Dump Trump”, with a Republican elephant wearing the candidate’s famous comb-over were painted underneath Trump Place by the West Side Highway.

According to the street-art blog Vandalog, the mural was inspired by a similar piece from the ’80s when mayor Ed Koch’s campaign against graffiti was met with street artists TFS crew who painted an entire subway car with the words, “Dump Koch.”

Much like his art, Hanksy never expected Trump’s candidacy to be taken seriously.

“Back when I first painted the mural in late summer 2015, Trump had recently announced his campaign. It was a big joke back then. Unfortunately, the punchline never came. Or it’s on us. I’m not quite sure,” the ‘Fartist’ told The Plaid Zebra.

“What I am quite sure about is that Donald Trump will say and do anything he can to gain support. That’s the scary part. What’s even more frightful is that he doesn’t believe half of it,” Hanksy said, referring to Trump’s history of supporting Democrats.

To the shock and awe of commentators across the country, Trump has done incredibly well. As a result, protesters have adopted Hanksy’s Trump turd across the country, displaying the image at the Republican front runner’s events and encouraging passersby to, “join the bowel movement!” and become members of the anti-Trump group “Dump Across America”. Embracing Hanksy’s carefree attitude, the (bowel) movement insists that, “It’s not politics: it’s common sense.”

“Yes my campaign is an anti-Trump bowel movement, but it’s all about bringing awareness. Trump’s not a good guy, period. He’s a pile of crap, actually,” Hanksy says, “[He] isn’t good for America or the world and the rhetoric he’s purposely spewing is severely double-edged. I don’t think he even realizes the damage he’s doing. It’s incredibly dangerous.”

Hanksy believes that the best way to convey his message is to give it to the public straight in the form of a fleshy poop spread across the country to remind everyone that it was all meant to be a joke.

“Minds can and will change,” he says with the hope that enough people will see the image and begin to think, “Damn, if this many people think he’s a piece of shit, MAYBE HE IS a piece of shit.”

The Trump campaign has not responded to requests for comment on Hanksy’s art, but it’s not likely that Donald believes a cartoon can bring him down after claiming, “I could stand in the middle of 5th Avenue and shoot somebody and I wouldn’t lose any voters.”

Still, the cartoon continues to follow Trump across America, and if it’s not enough to bring him down like Boss Tweed or to eat away at him in the same way that a joke about his ‘tiny hands’ might, it’s surely spreading the LOLs that its creator first intended.