In 1969, John Todd, Nancy Jack Todd, and William McLarney discovered aquaculture: a self-sustaining hybrid between an organic hydroponic garden (grown from water) and personal fish farm. The complementing relationship between fish and plant habitats allows one to simultaneously grow fish and vegetables at an astonishing rate, with minimal supplies and effort. Most amazingly though, is that this technology has sat idly in the background of the gardening community until only recently.

The incredible thing about aquaponic gardening is the way in which it addresses some of our major environmental problems: greenhouse gas emissions and freshwater depletion, which stem from food transportation and large-scale farming. Not surprisingly, it can be difficult to mobilize solutions to these sorts of problems until they breach the holy-fuck-what-do-we-do stage.

What if, for example, all of our grocery stores weren’t within a manageable distance? Moreover, if we were forecasted to lose 90% of our freshwater supply by next year, would our priorities change?

The good news is, losing our freshwater supply in one year is a bit of an exaggeration. The bad news is, losing it in the next 10 years is completely viable. By 2025, two-thirds of the globe is projected to live in “water-stressed” conditions – North America included.

Let’s put this into perspective: by 2025, there is a significant chance that Lake Mead – one of the most important U.S. lakes – will run dry. In other words, we can kiss Las Vegas goodbye. aannnddd now, it’s time to mobilize! 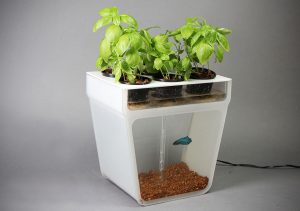 So how does aquaponics come into play? Glad you asked. 70% of the world’s freshwater is used for agriculture, the over-pumping of which exceeds the natural replenishment rate by over 160 billion cubic metres a year. Aquaponic gardening on the other hand uses 90% less water than our current farming systems. I’m no mathematician, but perhaps we can deduce a solution.

In order to truly appreciate the implications of aquaponic gardening systems, let’s consider its impact on areas of the world which don’t currently piss freshwater out their ears.

Aquaponic gardening, operating in a self-sustaining life cycle, has an extraordinarily minimal dependency on factors like land, water, and synthetic fertilizers. So much in fact, it could literally operate without difficulty in a windowless basement in the dead of an Antarctic winter.  This means that arid regions, which typically experience drought and famine, are now able to produce effective crops year round.

The social implications of this self-sustaining system mean that impoverished children can attend schooling, rather than spending their time working or searching for food. Adults can use their overflow of produce to operate small businesses, and illnesses derived from food contamination are also significantly reduced.

And what is required of one to maintain this holy grail of gardening systems? A handful of fish-food into the tank once a day – that’s it.

Now let’s jump back to North America for a second. How can we inspire a fleet of aquaponic gardeners before we reach the post-apocalyptic cannibal-conundrum stage of environmental deficit? Certainly not everyone is going to cling to the idea immediately; however those that do will notice a number of changes in their lives. First of all, aquaponic gardeners will notice a significant reduction in their grocery bills, with a simultaneous increase in their home’s supply of fresh produce and fish. Secondly, because these fish and veggies are organically grown, the improvement of one’s health can be expected. Furthermore, with an abundance of organic produce one could even supplement one’s income by contributing to local markets. All of these benefits are the product of perhaps a day or so of initial set up.

So like they say: give a man a fish, he eats for a day, teach a man to fish, he eats for life. Teach him how to build a self-sustainable fish farm and organic garden that produces enough to feed himself, his family, and potentially an entire community? Well let’s just say: welcome to gravy town, boys and girls.