Can we justify space exploration when the Earth is in distress?

Bill Nye keeps a Canadian fiver in his wallet.

Yes, that Bill Nye. The science guy. The one you—and anyone else who’s spent any time inside a North American classroom since the early ’90s—watched in science class. These days, he’s the CEO of the Planetary Society, an organization that advocates for space exploration. And yes, he keeps the Canadian five-dollar bill, with its depiction of the Canadarm, the International Space Station, and that floating spaceman, in his pocket wherever he goes. 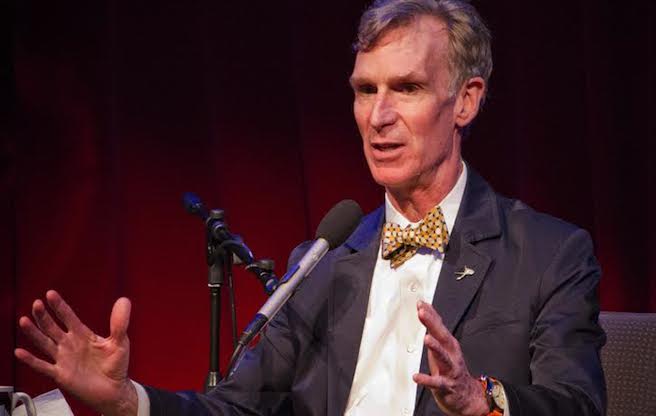 In town for the International Aeronautical Congress, Nye swung by the University of Toronto for a lecture and live radio recording on Canada’s contributions to space science and the state of the Canadian space program. Canadians, he said, are notorious for achieving a lot with very little (read: our program doesn’t have much of a budget). Waving around his bill, he also commended the way the country publicly and proudly celebrates space.

No doubt, Nye was preaching to the choir. By virtue of being there, every one of the 1,500 attendees in Convocation Hall would probably agree that space exploration is something to be excited about.

That excitement isn’t universally shared, though. Take the case of India’s space program. Just last week, an Indian vessel successfully entered Mars’ orbit—on only one-tenth of the budget that NASA would have had for a similar mission. Surely that’s an accomplishment worth celebrating, right?

For some, not so. Critics focused not on the odds-defying success of the space program, but instead on the poverty of the nation behind it. The New York Times ran a cartoon showing a poor rural Indian knocking on the door of an exclusive space club populated by fat white men. Last year, when the country’s Mars Orbiter Mission began, one headline ran, “India Mars Mission Launches Amidst Overwhelming Poverty.”

The headline captures a common sentiment: How can we justify space exploration, spending time and money on exploring space when the planet we inhabit is in shambles? It seems reasonable to instead dedicate our efforts to alleviating poverty in the third world, eliminating homelessness and starvation, ending wars across the world, and repairing the earth’s ailing environment. We should fix our own planet, the argument goes, before we find another to destroy.

On first glance, it’s a valid point. How can you refute the importance of being stewards for the earth? The answer is that you don’t have to. Space exploration and earth-centric humanism aren’t mutually exclusive; in fact, they’re intrinsically linked. Much of what we know about our own planet, its climate, and the way it works comes from the insights of satellites orbiting above us. They predict the weather, they let us communicate across seas in real time, and they gave us the revolution that is the Internet. It’s precisely by exploring space that we can help ourselves down on the ground.

So why does space exploration, and little else, get the “spend the money elsewhere” reproach? There are a thousand other things—military spending, CEO bankrolls, fossil-fuel industries, big-budget blockbusters, an endless list of unneeded products and services that our consumerist society has given the illusion of necessity—that should receive the same scrutiny. Contrary to aeronautics, they’re downright counterproductive. Whereas they encourage self-indulgence, greed, short-sightedness, and a list of other traits that got us into the mess we’re in, the principles required for space exploration—creativity, curiosity, collaboration, determination, innovation—are exactly what we need to get us out.

“Space brings out the best in us,” Nye neatly summed it up from the front of the hall. “Space challenges us.”

In some sense, though, this is all irrelevant. To many advocates, space exploration has a more fundamental, inherent value. It fills us with awe and wonder—the same things we felt as wide-eyed children staring up at the night sky, long before marks, mortgages, and money beat them out of us. Spotting Saturn on a clear night can amaze and inspire; seeing the cosmos through the Hubble Space Telescope can change a life; discovering, visiting, and exploring planets and galaxies near and far can alter human history. It already has.

Space exploration is the only real way we’ll ever get closer to answering the big questions: Where did we come from? Why are we here? Are we alone? No matter who, what, or where we are, when we ask those questions, we are all human. To reject space exploration is to accept that we’ll never find those answers. Actually, it’s worse. It’s a conscious decision to stop even looking.