Free diving, often called Apnea, a Greek word for ‘without breathing,’ is a form of underwater diving that is done without relying on breathing apparatus or scuba gear. It is an activity that has cost some people their lives and crippled others.

As a sport, free diving focuses on the ability of the person to relax completely, as a tense body consumes far more oxygen. When you reach a certain depth your body can simply fail; the lungs are so compressed that you are negatively buoyant. The greatest obstacle that free divers face is fighting the urge to breathe, which happens as there is no way to release the carbon dioxide that keeps building up.

In several cultures this is an important part of their livelihood. The Bajan people, also known as the ‘Sea Gypsies of Malaysia’ for example, fish underwater for up to five minutes at a time. They are born, live, and die at sea, and as most of them have lived in house boats all of their lives, some report feeling ‘land sick’ on the rare occasions they spend time on shore. Even their eye muscles have adapted to constrict the pupils more, to change the lens shape and to increase light refraction; their underwater eyesight is thus twice as strong as most people’s.

The women of the South Korean island province of Jeju also depend on it for their livelihood. Known as Haenyeo, which can be roughly translated as “Women of the Sea,” they dive as deep as twenty metres underwater, adorning old-fashioned headlight-shaped scuba masks so that they can harvest seafood by hand from the ocean floor. They strap lead weights around their waists to help them sink faster. Using sharp tools such as a conch, abalone or other creatures they find on the seafloor they collect the harvest in a round flotation device called a tewak, about the size of a basketball, which sits at the surface of the water with a net hanging beneath it. They stay underwater for as long as ten minutes at a time, as they fish for squid, sea urchins, octopus, seaweed, and abalone.

For these women, diving is a way of life—a tradition that dates back to the 5th century. Until the 18th century, diving was a man’s job. Slowly the women learnt the art and began replacing their husbands as the primary breadwinners of the house. The knowledge was passed down from generation to generation, until now. Unfortunately, the numbers of Haenyeo divers are dwindling as a result of the new fishing methods that have replaced free diving enable greater hauls and reduce workloads, and also because the younger generation are now flocking to the mainland in pursuit of an education or more modern career. As of 2010, most of the already dwindling population of Haenyeo were over 70 years old, with no generation of women training to serve as their successors.

Recently, photographer Mijoo Kim set out to document the last generation of women who have dedicated their life to the art of diving. Born in 1983 in Seoul, South Korea, Mijoo Kim is a Korean visual artist who is currently based in New York. She is a multidisciplinary artist and educator, who creates documentary and conceptual bodies of artwork. She received her Bachelor of Fine Arts with an emphasis in photography from the School of Art Institute of Chicago, IL in 2010, and her Master of Fine Art with emphasis in Studio Art from the University of North Carolina at Chapel Hill soon after. Her work has been exhibited nationally and internationally such as Southeastern Center for Contemporary Art, Ackland Museum, Center for Photography at Woodstock, Asia Contemporary Art Show in Hong Kong 2015, Cameron Art Museum in Wilmington, and Seoul Auction Center Gallery in Seoul, South Korea.

“I have been interested in not only exploring a variety of human lives, but I aspire to talk about the cultural work of looking as well. When I began doing photography, I was especially interested in understanding and representing people’s lives in our various parts of society. That is the reason why I have been interested taking photo series in immigrant workers in Korea and Adoptees as the subject matters. As I am a woman photographer who is from Korea, I believe I need to say something that has meaning, something that is socially enlightening and also relevant to the public through my photographs,” she explains.

She believes that making a memorable photograph is based on photographer’s compassion with respect for the subject matter, curiosity about the subject matter. This is something that is evident in all her works, especially The Mother Of The Sea. “The project of ‘The Mother of the Sea,’ came from below sea level. These women have a century-old history of making their own living. Being a Haenyeo is certainly not meant to be for the weak; hence the saying in Korea which goes, ‘Haenyeos do the work of the dead in the land of the living.’ Through the series I wanted to capture their work and show the world what a difficult and physically demanding work they are doing,” she shares.

She hoped to create a symbolic discourse on their daily lives through her work. “These women divers are carrying on a Korean legacy as having lifelong profession. I hope to share not only their beauty as women, but also their courage and their tenacity in facing difficulties during their lives. I hope these haenyeos are not the last of their line. There are schools on Jeju to preserve this culture and tradition. However, due to industrialization, pollution, and the dangerous and arduous nature of the work, the number of divers is fast declining. The Korean government official said most of the haenyeo will be gone in 20 years unless there are new recruits. Today, there are approximately 2,500 active divers, which is significantly lower than the 20,000 divers in 1960. In 2016, the haenyeo were added to UNESCO’s Intangible Cultural Heritage list,” she says, explaining why she chose to do this project. 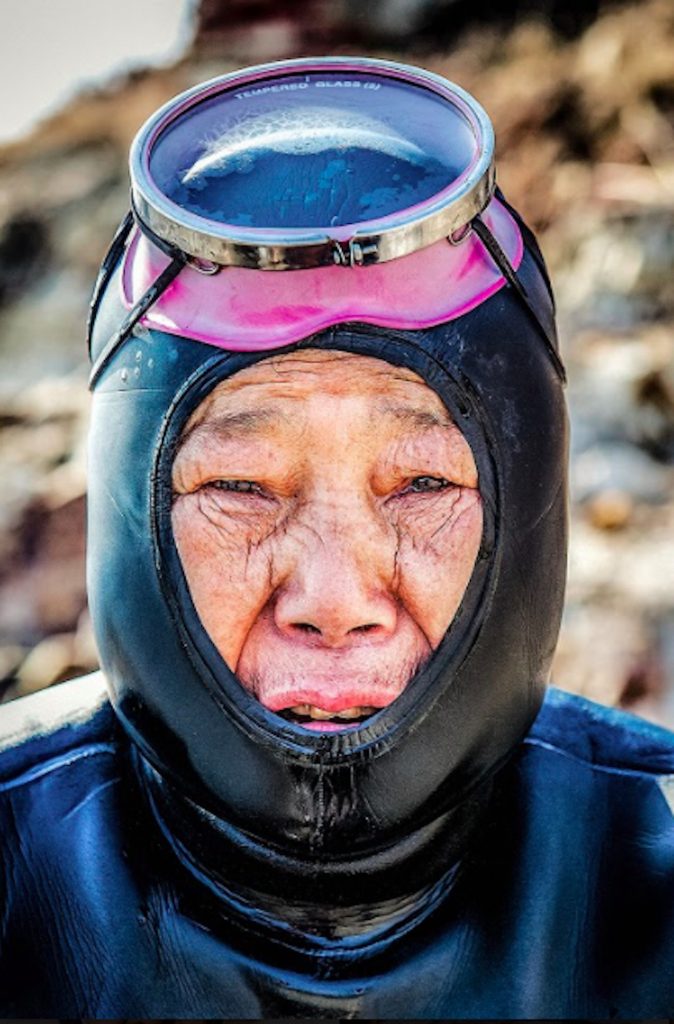 “Even though there were a few unexpected challenges that popped up, it was a great experience working on this project. I would wake up around 4 a.m. and call one of the Haenyeos whom I became close with. Their job was affected by weather all the time. But, no matter how the weather is I would drive to Gijang County, which is located in northern Busan, South Korea, about two hours from my home in Korea,” she said.

“I started this project in  December 2013, which was a particularly cold winter.  The temperature during winters in Korea ranges between -6 °C (21.2°F) and 3 °C (37.4°F). The first day I tried to take photo underwater and that was the hardest day of shooting. I have never experienced anything like this before—scuba diving and shooting in the sea. Even I thought I was a good swimmer and was so confident, it was not easy at all. I couldn’t even follow them. They seemed like young mermaids to me—so fast and flexible. I didn’t even see any sea urchin (which is what they mostly collect during the winters) because they look just like rocks in the water,” she said, describing her experience.

“When I tried to take photographs the first time, they didn’t have any interest in my project, so they refused. I was raised near the sea in Busan, which is in the southern part of South Korea, I had a passing familiarity with haenyeos when I started the project, but I didn’t know exactly what they go through. So I spent several weeks with them just helping out, driving them back from their last dive site, and helping peeling sea urchins. I only wanted to start taking photographs when they gave their consent. That it the way I can show my respect for them, too. That is why I was able to click close-up shots of their portrait. I believe the relationship, or lack of, between a photographer and subject matters as it is translated into the photos,” she adds.

“After this project, I started exploring the processes of memory and identity formation and got me working on two series, Re-Figure and Role-play. In these, I deal with the anxieties and sadness that come with the process of aging from a young woman’s perspective and the expectations that this process brings as well. These processes entail challenging and important questions about gender roles and representations of women, myself included,” she said, explaining her other upcoming works. 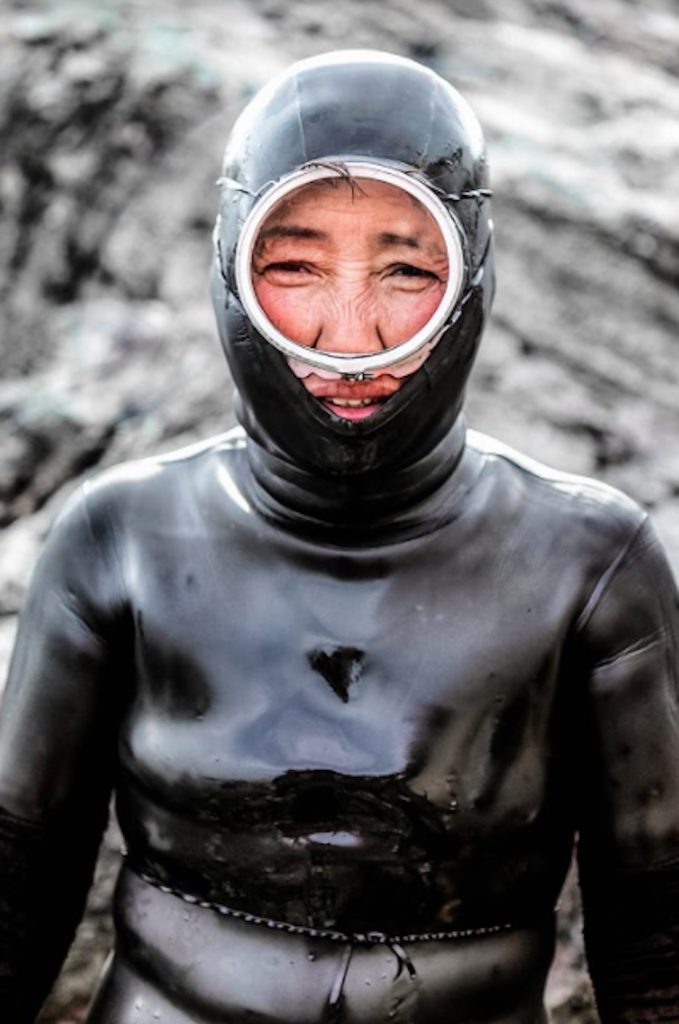