“A two-day walk from the nearest road, the Gurung village which documentary filmmaker Raphael Treza discovered is almost entirely self-sustaining. Growing their own food and raising sheep for wool this reclusive community of Maoist dissidents live a quiet life tucked away in the staggered hills of the Himalayan Mountains. They also maintain a deadly tradition known as the honey hunt.”

After finding a guide, who was equally curious and up for adventure, Treza joined a group of Gurung villagers on their annual hunt.

“They don’t have a lot to trade besides clothes and farming products, so this honey is a great source of income for them. They sell it to the villages around, but in very small quantities.”

Where an ordinary beekeeper might only need a few minutes and some protective headgear, the Gurung’s honey hunt requires a full team of daring foragers and a good chunk of the day. Especially since Himalayan honeybees, which average an inch in size, often hang their honeycombs from the face of a cliff.

Without fear of the swarm or dizzying heights the hunters make their way to the top with the knowledge that they may not live to taste the reward.

Once a hive is found the hunters construct a rope ladder from braided bamboo which is hung from the clifftop. Handmade cutting tools are then used to place the honey into baskets, all while wearing as little as shorts and a T-shirt.

As the team approaches the bees can be seen flicking their abdomens to create a dark and pulsing wave around the hive as a warning. Without fear of the swarm or dizzying heights the hunters make their way to the top with the knowledge that they may not live to taste the reward.

“Each cliff bears the name of a dead hunter, inscribed on the rock.” Raphael says.

This is why each hunt is preceded by a religious ritual called a Pujah, including an animal sacrifice – in this case a rooster – which also serves as the afternoon’s meal.

“We do this ritual to avoid problems, misfortune, and accidents. We have to summon the spirit of the forest because it has a soul and we don’t want to offend it…when we hunt the honey the bees don’t give in easily, it’s a real battle.” Kershing, who has been hunting honey for 40 years, tells Raphael. “We make this offering to be protected and so that no one falls.”

Harvesting usually takes place in the spring and autumn when the honey is most potent. But tourism associated with the hunt is threatening its future. Luckily, the Gurung villages and their hunting grounds remain hidden away, and the honey itself is less potent at a lower altitude.

“The high is much better in the mountains as it contains a special alcohol (diterpenic alcohol) it’s more efficient in altitude, exactly like having a drink when you go skiing.” Raphael says. “I took a bottle with me back to Paris, and I was a bit disappointed by the effect trying it again at a lower altitude.”

The honey’s intoxicating qualities are the result of nectar which contains grayanotoxin and is found in the rhododendron, a flower which only grows in a handful of mountainous countries.

The recommended dose is about a teaspoon, and larger doses can be debilitating and even deadly. In modern day Turkey, where the process is more domesticated, the honey is mixed with alcohol. But in ancient times it became known as “mad honey” and was used as a weapon.

When the Roman general Pompey invaded Turkey in 67BC his soldiers found the roads lined with honeycombs. Drawn to the deadly treat, they stuffed their faces and stumbled onto the battlefield high on honey and barely in the condition to stand – let alone fight.

Symptoms of honey poisoning include: intense hallucinations, irregular heartbeat, loss of balance, fatigue, excessive sweating, nausea, and vomiting. In some cases of over indulgence the honey has even proven to be lethal.

“There’s a ratio of nice high and intoxication that’s a bit hard to manage.” Raphael says. His guide Dipak who had to be carried back to the village, ate an entire handful.

Among the tribe the honey is seen as a medicine, but also has its recreational benefits.

“They use it as an aphrodisiac, just like getting drunk makes the people hornier, but smoothly, this product is soft, it gives you a little kick.”

And with the right dose it can do a little more.

“I had visions the day after the honey hunt, I saw a wonderful white flower, that I had never seen before, and I realized I was going into it,” he says, “I was seeing all of this as a bee.” 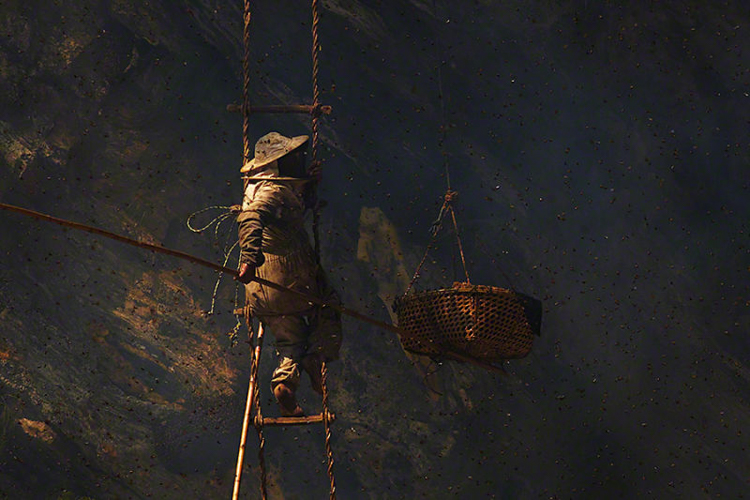