In Clayoquot Sound, BC, tucked away in the coastal inlets of Cypress Bay, and about a half-hour by boat off the coast of Tofino, live Catherine King and Wayne Adams—the owners and operators of Freedom Cove.

Freedom Cove is a magnificently constructed and colourful off-grid float-home and garden, only accessible by boat. If your ambition is to go off grid, Wayne and Catherine—along with their two kids, Eleanor and Alistair—have more or less developed the perfect system.

Their floating home and garden system includes about twelve platforms, supporting a number of wooden structures, living spaces, and greenhouses—all interconnected through a wooden pathway system. The rainy winter season takes care of the water supply during colder months, while in the summer the majority of their supply comes from a waterfall across the bay.

The couple also used to have a hen house on the property; however their ambitions were spoiled by the increasing attention they received from predatory sea-animals in the area. The electricity is also largely supplied through solar panels and photovoltaic energy generators. The numerous greenhouses produce veggies and fruit all year round, allowing Wayne and Catherine to be completely self-sustainable. In fact, this system has been sustaining itself for the last 20 years.

Wayne and Catherine’s home also is situated in the thick of a lively ecosystem, sharing their slice of land (or water, rather) with deer, wolves, otters and a plethora of large coastal birds. However, according to Wayne, the otters are little more than “30-pound rats” that frequently gnaw away at his foundations.

The two are also respected artists within their surrounding community; their carvings and candles can be found in various gift shops across Tofino, particularly around the Long Beach area. Wayne is typically behind the carvings and crafts, while Catherine—formerly a professional dancer—is now predominantly the mastermind behind their gardening initiatives. Catherine is also a painter, writer and wood carver.

If you wish to visit their float-home, there are now a few different charters that offer boat tours of Freedom Cove, as well as sea kayaking tours.

Though most approach this off-grid lifestyle with hesitation about boredom and societal disconnection, Wayne, Catherine and their two kids insist that their lifestyle puts one in touch with the rhythm of nature, connecting you to your surroundings in a way that is unavailable to the world’s cities and suburbs. 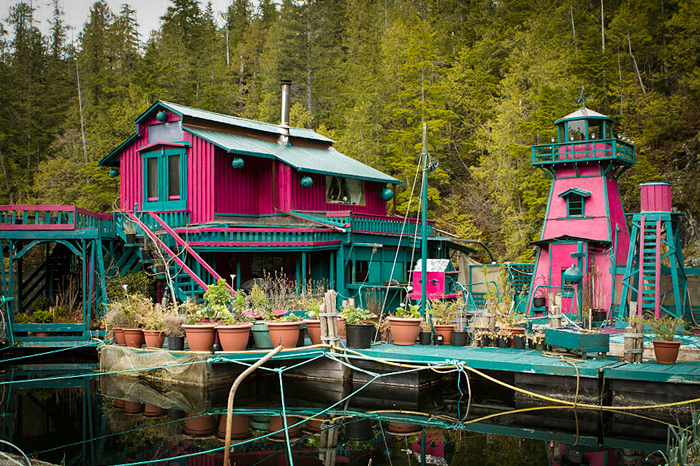