The moon hangs high over Toronto’s Serena Gundy Park, a thriving forest tucked away in Leaside, one of Toronto’s wealthiest neighborhoods. As people begin to file in, the tall trees that separate the woods from the street sway rhythmically with the gentle push of the September wind. Everyone is preparing themselves for the nights events— the hum of voices can be heard from the beaten path that leads to this large clearing in the middle of the forest. A man walks off into the trees and a few minutes later, he emerges adorned in a floor length hooded brown velvet robe. Three years ago he would have never imagined himself abandoning his pursuits of becoming a Catholic priest in order to join the Wiccan faith.

Dan Finn is the epitome of average modern man. He wakes up in the morning, goes to work at his 9 a.m. – 5 p.m. government job where he files documents and deals with mail, among other things. At the end of the day he comes home to his family of two; his boyfriend Joseph and his white Burmese cat, Cotton.

By night, Dan praises the Gods and Goddesses worshipped in Wicca, attends rituals and even goes by the pseudonym Anura. 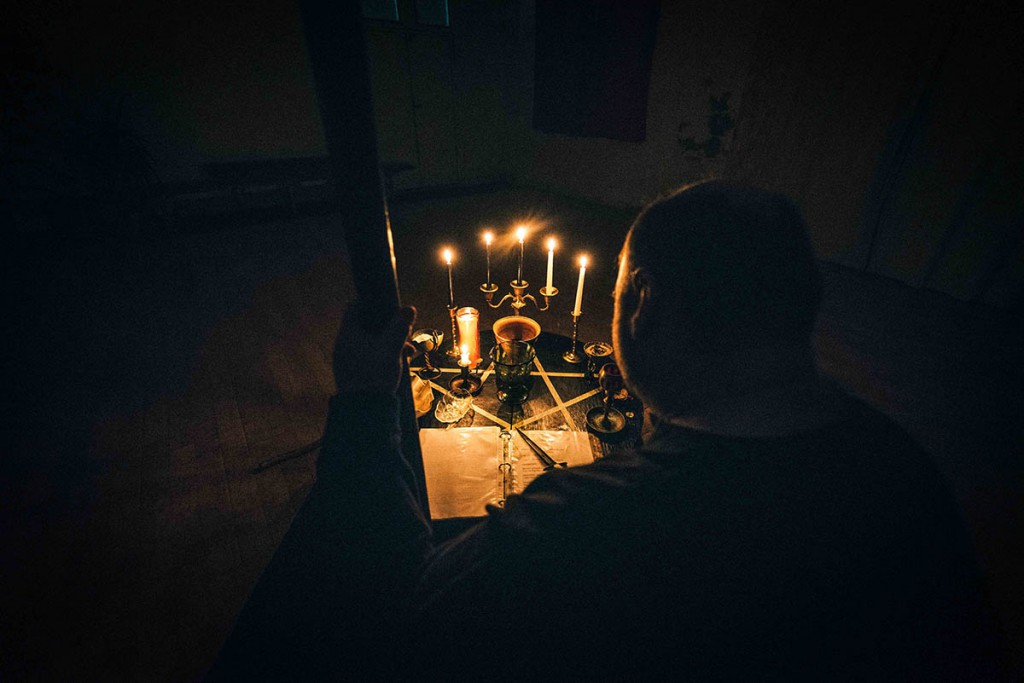 “Growing up, my mom had occult books and I remember just looking at them, flipping through them, even before I could read. At one point I was a seminarian, on track to become a Roman Catholic priest. I’ve always had an inkling to be in some sort of clerical duty.”

The pagan religion of Wicca has been around since the early 20th century, but the religion first found footing in Canada in 1979 when Richard and Tamarra James, along with a few other members of their coven founded the Wiccan Church of Canada in Toronto. Richard and Tamarra moved from California and brought with them their vast knowledge of the occult, opening up a small store called the Occult Shop on Vaughn Road, that has since relocated to 1373 Bathurst, Toronto.

The goal of starting the church was to make it easier for newcomers to find their way into the craft and to add legitimacy to the religion. As the church grew, the members of the original coven scattered, creating covens of their own with the new members. The church offers weekly classes focusing on different aspects of the religion, from tool making to ceremonial magic. As the popularity of Wicca grows, a Hamilton church was created to service the needs of practicing witches in the area.

What causes someone who has dedicated their life to Christ, to drop everything and pursue witchcraft? According to Dan the answer is simple—diversity. “Every ritual is so radically different, all the priests and priestesses are different, and it gives you a good snap shot of different faiths and that’s what kind of reels me into coming every week. Love it or hate it, witchcraft is an art of diversity.” 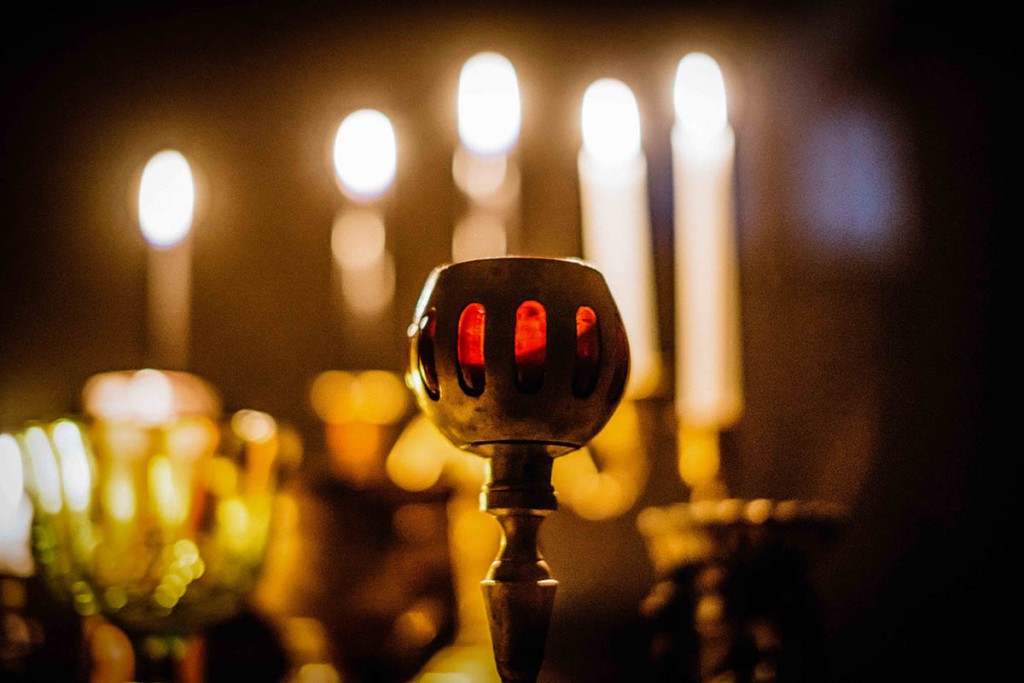 Lined up one by one in the moonlight, 45 witches in velvet robes and silk gowns begin to walk slowly towards a roaring fire. In front of the fire is a circular black wooden altar with a white pentagram painted on its face. The altar lies flat on the ground supporting the ritual tools: a chalice, wine, a sacrifice, candles, an athame, a sword, salt, and water. In the grass beside the altar lies three broomsticks. The witches enter the ritual space chanting in unison, eventually forming a large circle with the high priest and priestess in the centre facing the north, singing the words, “May the circle be open, but not unbroken, may the peace of the Goddess be ever in your heart.”

Richard James raises his hands to the sky, silencing the circle as he begins to speak, “After much consideration it is with great honour I appoint our new summoner.” Silence. Even the hum of the mosquitoes seems to cease, “Anura, please step forward.”

The job of the summoner in the Wiccan Church is one role the community does not take lightly. The duties include protection of everyone participating in rituals, screening newcomers and evaluating potential threats. If needed the summoner must be willing to lay down his life in protection of the high priestess. Although the church has never faced more than “drunk kids throwing rocks,” at them, if the time ever came, the summoner must be ready to fight for the lives of Wiccan community.

The previous summoner of the Wiccan Church of Canada is a sturdy Italian man named Jackson Fig who also had his doubts with Catholicism. “I couldn’t get over the fact that I was so Christian, and so in love with God, and the people that claimed they did too were sinning left right and centre and were still coming to church like everything was okay.” After this realization, Jackson decided that although Catholicism is the path his family chose, it just wasn’t for him. Conflicted by his love of religion and his newfound rejection of Catholicism, Jackson knew a change had to be made, “I took a step back and said ‘The only way I’m going to be okay with religion is if I can find one that matches what I believe in.’ So I took a pen and paper and wrote down everything I believed.” And for Jackson, Wicca happened to hit more points on his list than any other religion. 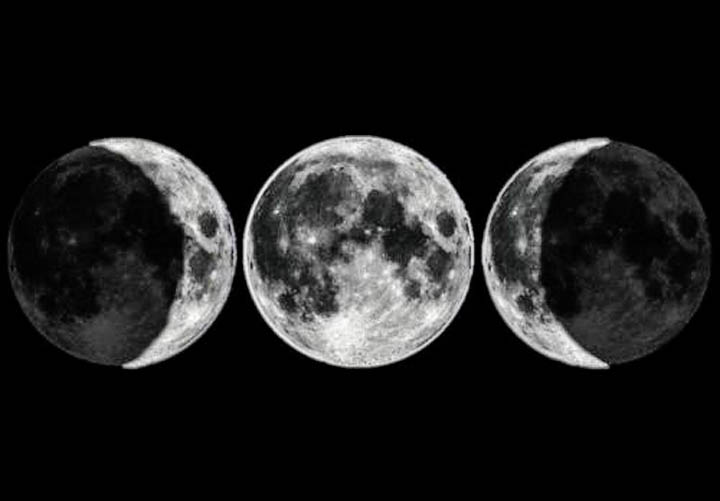 “After careful deliberation, the high priesthood has decided to appoint you as the new summoner of the Wiccan Church of Canada.” Richard pauses, and the crackle of the fire fills the void of silence. “Should you accept this position, the safety and security of everyone participating in rituals within the church is in your hands. You will be our guardian, our protector against any harm that may threaten us. Do you accept this position?”

Dan’s feet resemble cement blocks as he drags himself into the middle of the circle to join the priesthood. Seconds feel like minutes as all patrons hang on the edge for a response. With a deep breath he says simply, “I accept.” Applause echoes through the trees as previous summoners from the past 40 years begin to line up to exalt words of wisdom upon him. Next the priestess fills a chalice of wine, she raises it to the sky for divine blessing taking a long sip and begins passing it around the circle. One by one we drink from the chalice, and I’m reminded of the one word of advice my father gave me before embarking on my journey into witch-hood, “Just don’t drink the Kool-Aid.”

Once this is finished the group contracts to form a tight circle around the fire; with arms draped around one another, Richard begins chanting, “Hey, ho, pentagram glow, guard this hearth, this home, this land….” The group begins to join in. With the glow of the fire illuminating their faces and casting ominous shadows against the trees, everyone slowly begins to sway from side to side in tribal rhythm. 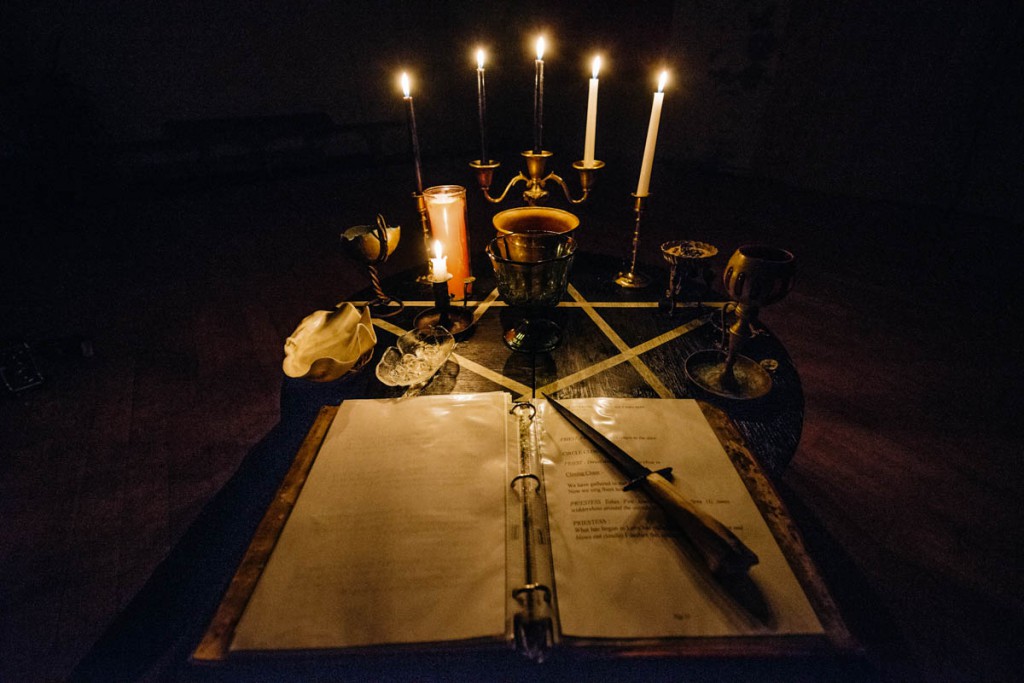 Colleen Shantz, a University of Toronto Theology professor thinks she knows why people like Dan and Jackson have strayed from Catholicism and found solace in Wicca. “We are so dependent on one another to give meaning to our own lives. I think if anyone is attracted to any religious organization it’s partly in search of identity and the social confirmation of identity.”

Dan begins the trek through the woods to get back to the main road with a few witches and his boyfriend Joseph. Dan and Joseph walk hand in hand chatting about the night’s proceedings. Passing a couple walking their pug, they smile and say hello. I wonder if their demeanor would have changed if the couple had known what these Wiccans were up too just 15 minutes earlier?

The group continues walking, a black cat scurries across the road not 20 feet away. “Isn’t that fitting,” one of the witches says with a cackle.